Europeans imagine Maharajas with the fabulous greatness: the palaces magical on their splendor, full of servants and concubines, the elephants embellished with jewelry, the treasuries groaning with rubies, diamonds and emeralds. 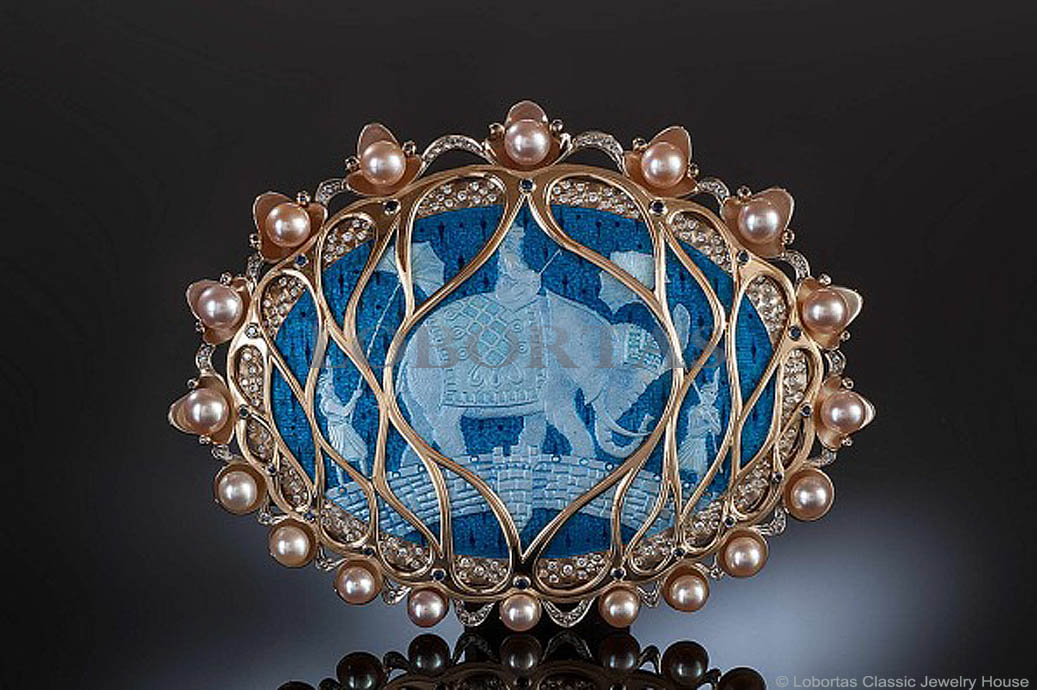 Today the fact that the British managed to conquer such an enormous country amazes a lot of people. In fact, they did not conquer. They made agreements. The princes (the colonial British rulers told them to call themselves in such way) agreed to be on friendly terms with the Englishmen against their neighbors with great pleasure. 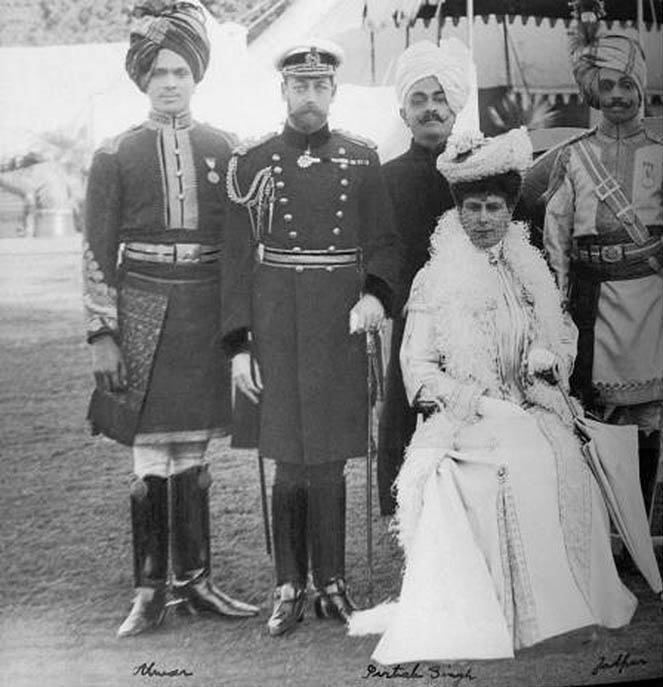 By abandoning the sovereignty, Maharajas got the guarantees and privileges – the right to do everything what they want at their land. The only thing that was not allowed to the princes, was to be friendly with someone against the British. They were overthrown for this. 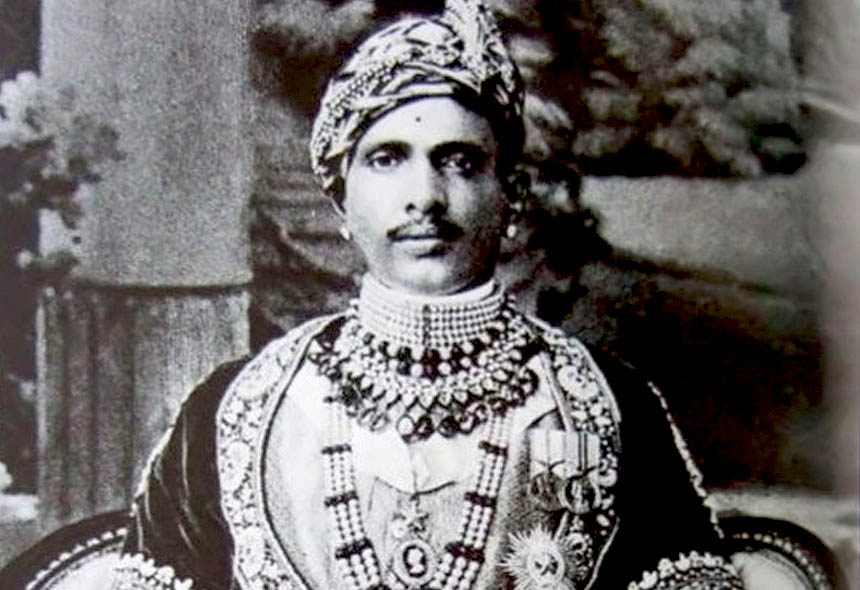 Maharaja Sawai Jai Singh Bahadur from Alwar, born in 1882. In addition to the traditional Indian jewelry, he wears the star – the highest Indian decoration awarded by the king. That was a part of the royal regalia at the time.

Maharajas’ whims were legendary. They spend untold money for entertainment and the caprices, they had harems with 300 women, swam in the pool with champagne, their carriages were of pure gold. 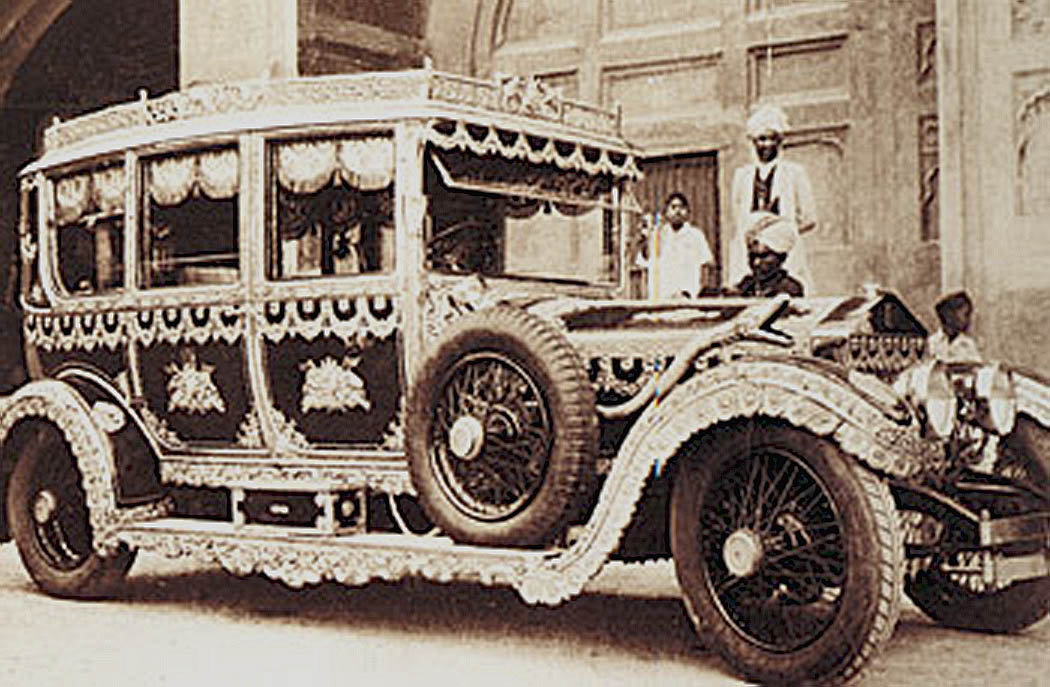 Maharajas bought Rolls Royces, for forty years, counting from the first orders; they purchased more than a thousand of them.

Nizam of Hyderabad used the famous diamond “Jacob/Victoria” instead of paperweight. The fate of this diamond is mysterious and the Nizam’s – unenviable. 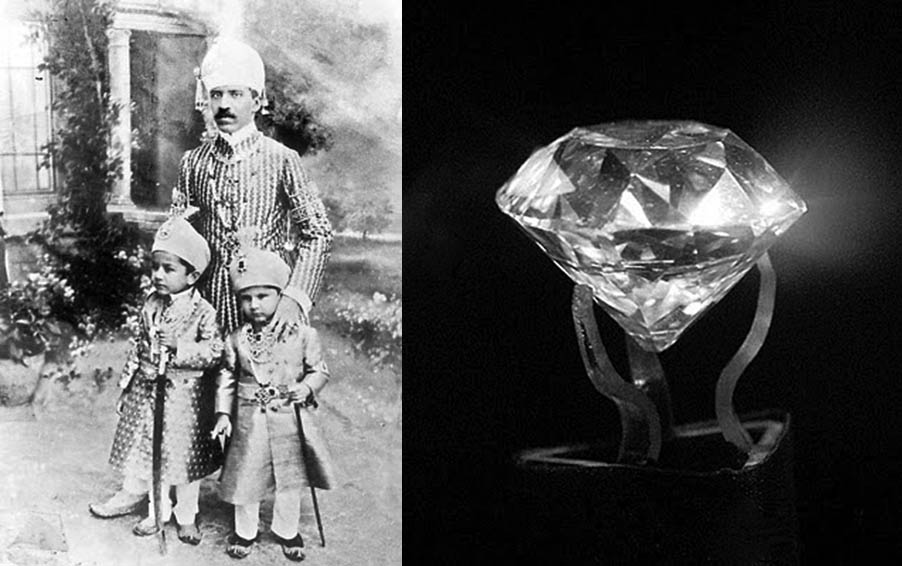 From ancient times the Indian Maharajas owned unearthly fabulous riches; the conquest of India by the Great Mughals did not destroy its wealth, in contrast to the conquest of India by the British. Islam of Great Mughals was not fanatical, they did not pursue Hinduism and inculcated a refined Persian culture in India. In addition, they loved to make a show of their wealth and from that time the treasures of India were the great temptation for Europe.

The Maharajas of the kind of Great Mughals lost a lot of their glossiness in the colonial era. In 1920th they amazed the jewelers of Paris, London and New York, appearing in their workshops with cases full of precious stones, the quantity and quality of which was striking even for famous masters of Cartier, Faberge, Van Cleef & Arpels, Boucheron. 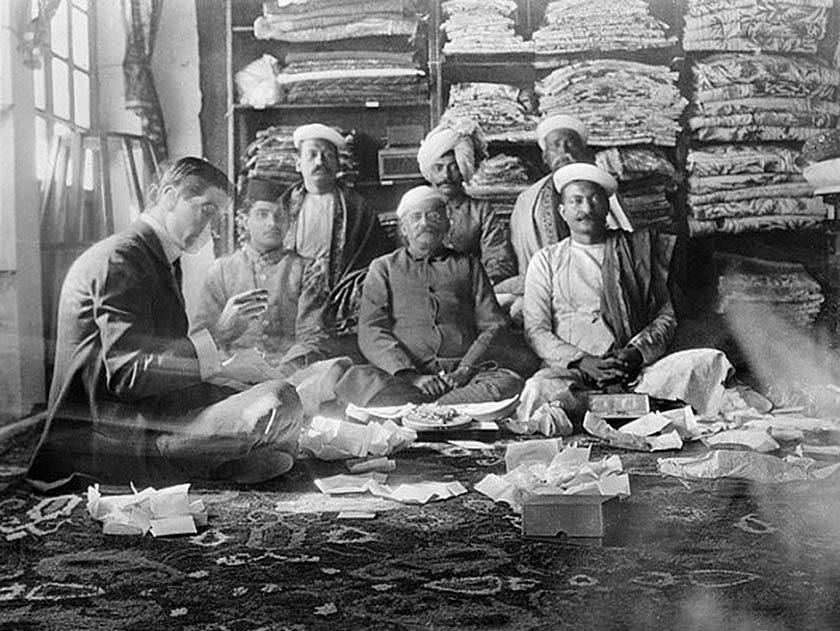 Jacques Cartier with the Indian dealers of precious stones, 1911 (photo from the Cartier archive).

Maharajas would bring their native Indian traditional style to Europe, they would order the Indian head adornments, armlets and pectoral jewelry, pendants, performed virtually out of diamonds of the highest quality, turbans, ornated with rubies and emeralds of the quail egg size. 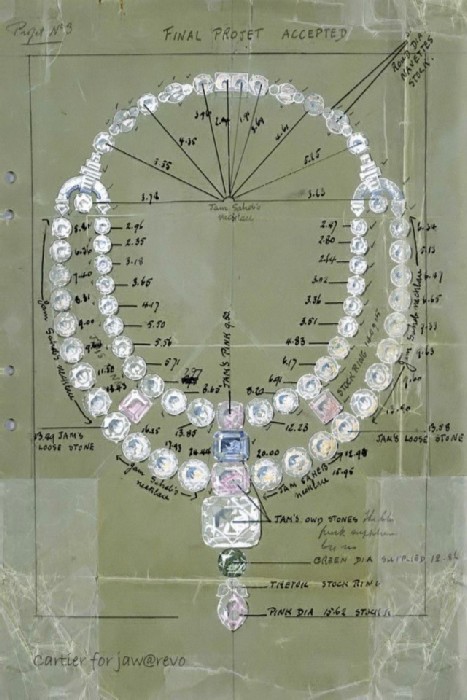 The sketch of the ceremonial necklace for Maharaja Nawanagar,
1931 (photo from the Cartier archive).

Typical Indian style with the great number of precious stones, gold and abundance of jewelry has affected the western fashion and took an important niche in the art and culture of the jewelry creation. 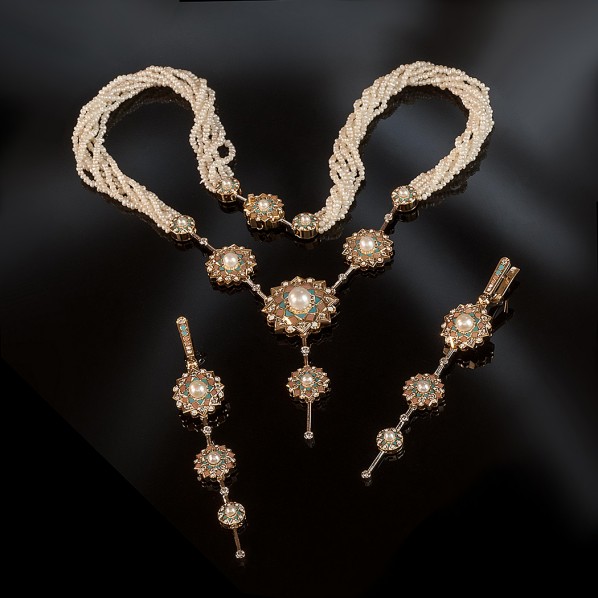 Hyderabadian Nisams’ collection of jewelry is the most valueble one in India. It consists of 173 items and includes more than 25 thousands of diamonds, weighing more than 12 thousand carats (2.4 kg), 2000 emeralds, 40 thousands of pearls. Jewelry for the turban, necklaces, belts, earrings, bracelets, timepieces and chains for them, buttons, cufflinks ,rings, rings for toes, jewelry for the nose are in the collection. An unquestionable “Star” of the collection is the Jacob diamond, the crystal notable for its particular purity, weighting 184.75 carats and with the estimated value of 100 million dollars. 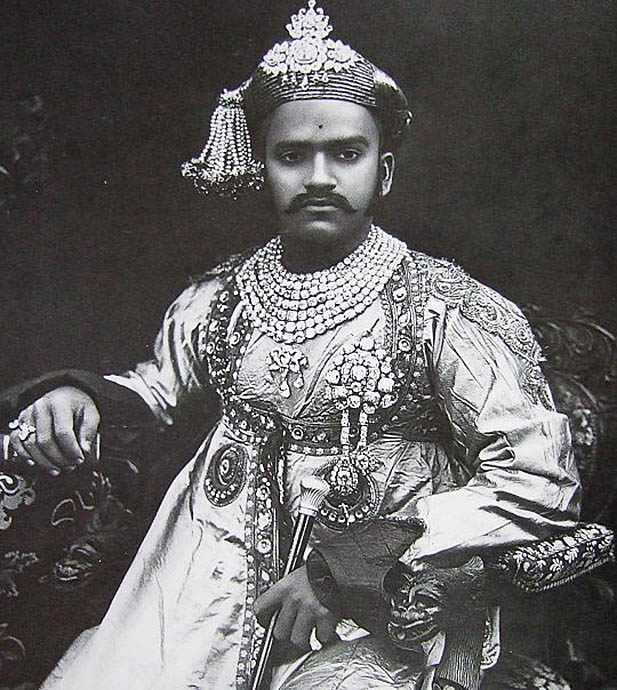 Maharaja of Baroda ,1902. He is decorated with seven rows of his famous
diamond necklace and other ornaments with diamonds.

One of the significant collections of jewelry was in possession of Baroda Maharajas. It stored “Star of the South”, Brazilian 129-carat diamond and “English Dresden”, the drop-shaped 78.53-carat diamond. But the greatest jewel of Baroda maharajas was the grand 7-rowed necklace of natural pearls. 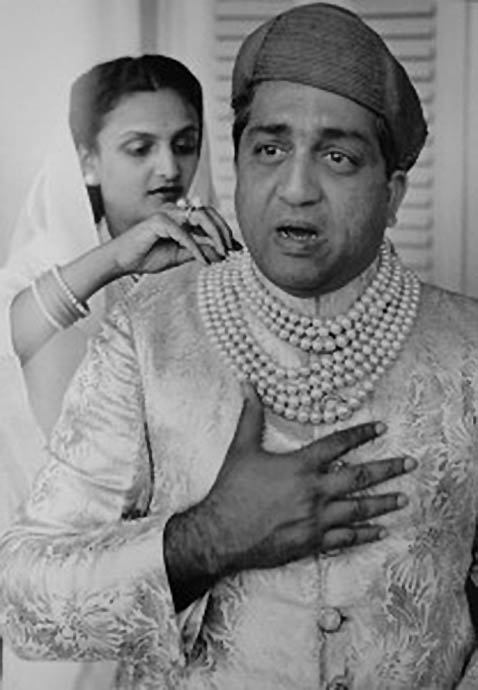 The most famous of all the Maharajah treasures was “Necklace of Patiala”, the necklace of the Maharaja Bhupinder Singh. Maharaja Bhupinder Singh (1891-1938) was a true Eastern ruler. He ordered his guns at the Westley Richards in Birmingham and from London firm of James Purdey, Dupont delivered him unique precious lighters from Paris and “Rolls-Royce” made vehicles to order. The Maharaja was fabulously rich, he fervently loved jewelry and he provided with the work not only jewelers of Cartier, but also artisans of Boucheron. There is a legend that the spouse of the Maharaja of Patiala, met the Duchess of Windsor in a lush necklace at the reception in New York. It was crafted by the Cartier firm out of her former anklets. In the East, they cherish the traditions and relics, but they never took great interest in antiques. They don’t have such concepts as “family jewelry”. They value only the material out of which their heirs may order new jewels or trade them for the other. 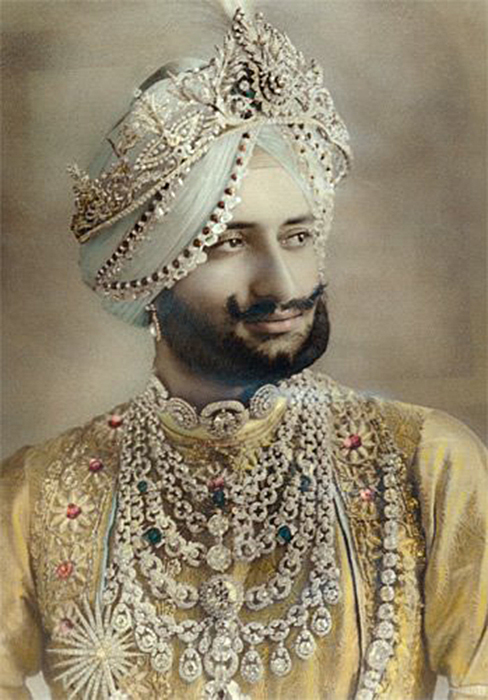 The most famous of all Maharaja Treasures is the Necklace of Patiala.

Artisans of Cartier have worked for three years to make the necklace. The “De Beers” diamond shone in the centre of it. The complete jewel was a cascade of 2,930 diamonds with total weight of 962.25 carats and two rubies set in platinum. Having been completed, the necklace of the Maharaja of Patiala was second to no one in the world. Cartier was so proud of his work that he requested the permission to reveal the necklace before sending it to India. Maharaja agreed. Later he often took pictures with that necklace. For the last time the necklace was seen untoched on his son Yadavindra Singh in 1941. 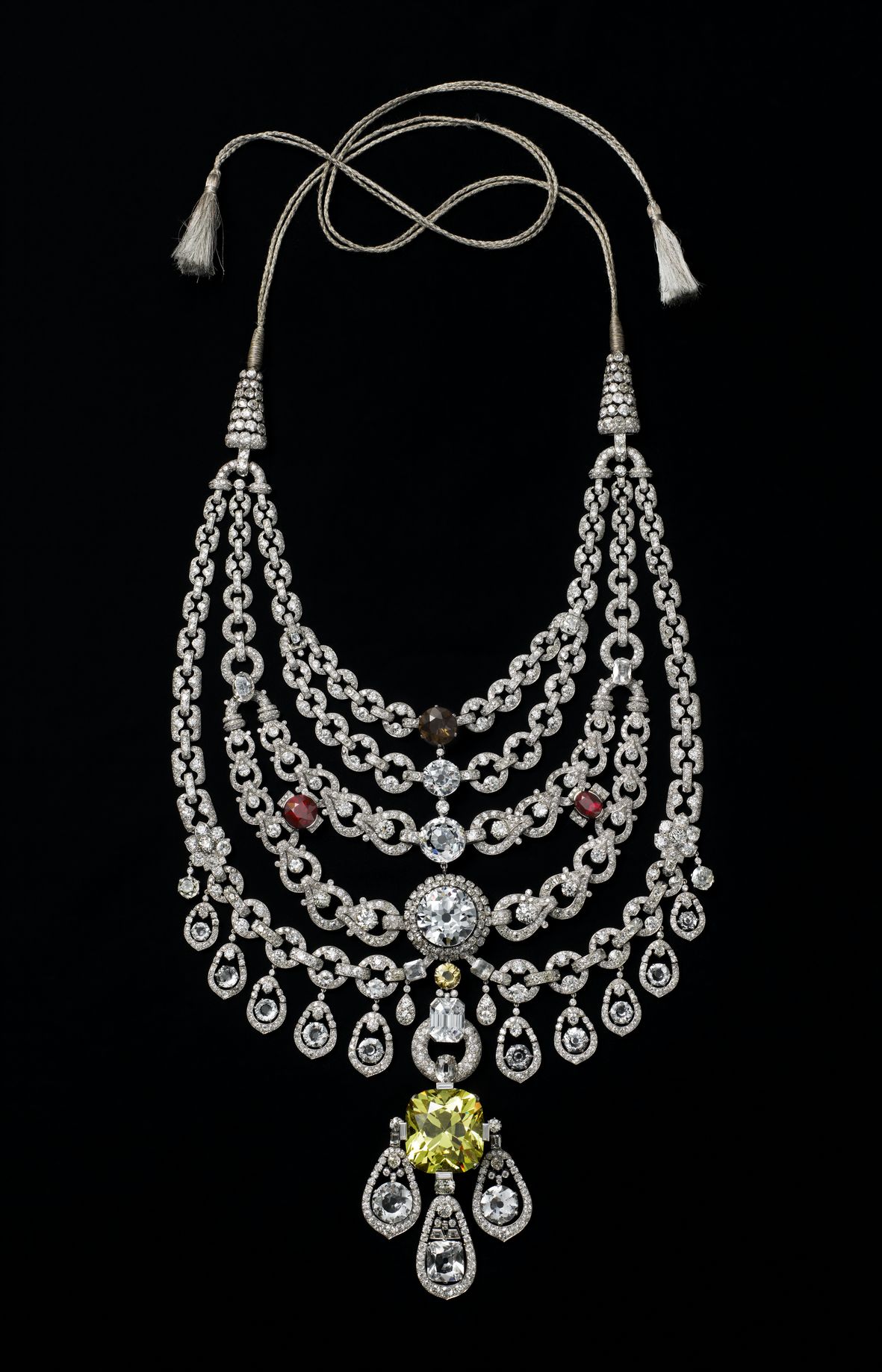 Necklace of Patiala, the necklace of the Maharaja Bhupinder Singh

For the time of the British colonization a great number of jewelry was exported outside of India. Unfortunately, the largest part of the jewelry is stored in the caches of private collectors. In 1947, the UK, was not able to control the huge colony, and divided it into two Dominions – Pakistan and the Indian Union, which in 1950 became the Republic of India. With the independence of India the whole world crashed down overnight. Maharajas were deprived of money, titles and power. A lot of them fled abroad having taken everything that they could take. The others, in order to survive, had to sell everything valuable that they inherited. In 1951, Britain refused to accord tax immunity to crown princes due to that fact. Many families had to bid farewell to a part of their jewelry. 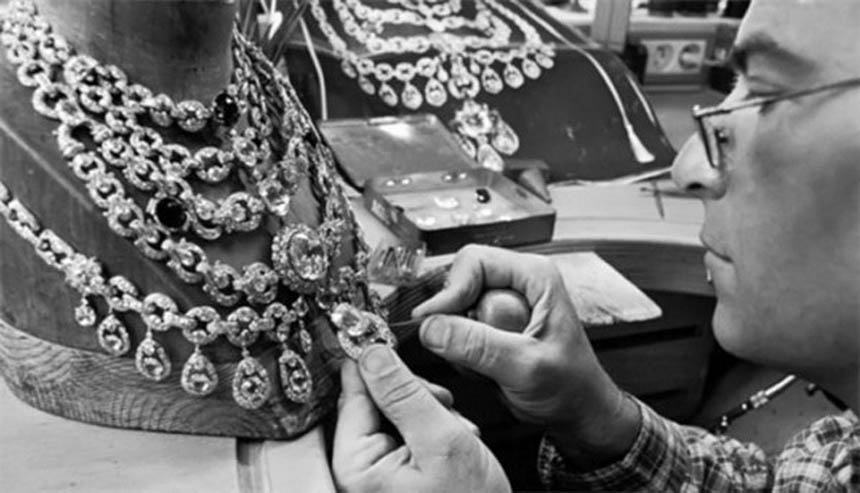 The work on a copy of the necklace of the Maharaja of Patiala in the workshops of Cartier.

Famous necklace of Maharaja of Patiala did not escape its destiny: most large stones, including the “De Beers” diamond and rubies were removed and sold. Platinum chains were sold last. The representative of the Cartier saw them by chance, learned, bought and decided to restore the necklace, although he believed that it would be virtually impossible to find a decent replacement for “De Beers” and rubies.

That work was incredibly difficult, all the more so that the only indication of the existence of the necklace was black and white photography taken in the first half of the XX century. It took almost two years to restore the necklace. In 2002, the rebuilt necklace was exhibited in Paris. The new necklace looks exactly the same as the original, at least for an inexperienced eye. Synthetic stones almost unmistakably transmit the beauty of the original, but Cartier do not lose hope to replace them to their true ones.

Jewelry, crafted in the Indian style, are increasingly replacing the classic miniature, performed in strict lines. The absence of colors in modern cities and high-speed pace of life make people draw their eyes toward the holiday, the riot of luxury. 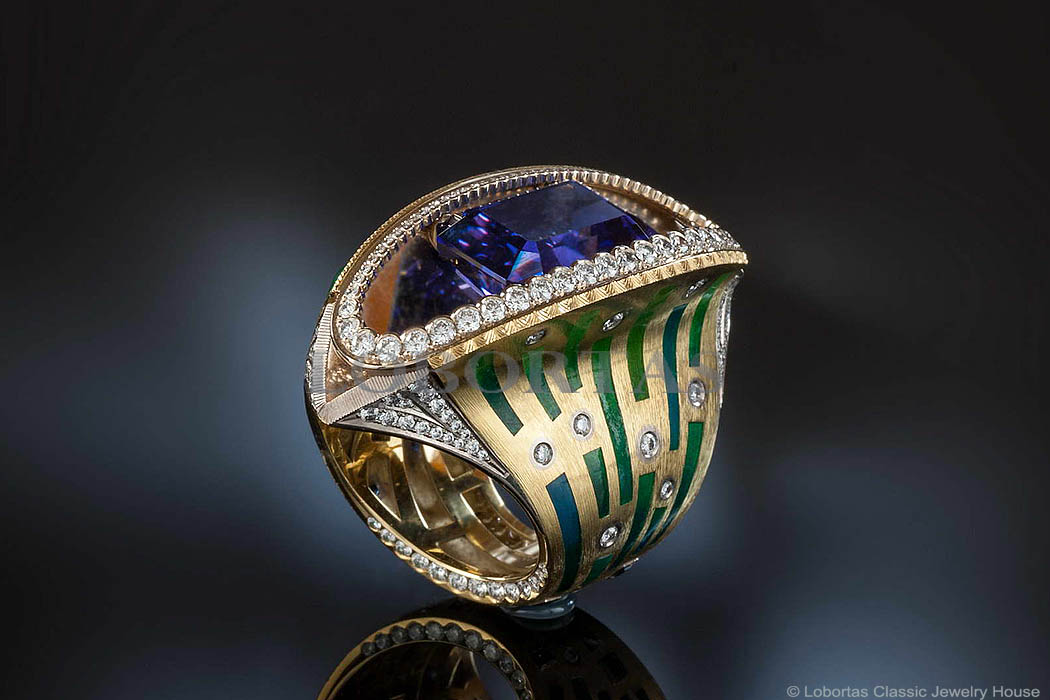 Ring «After the Rain»Lobortas House
Photo by Vladislav Filin

Jewelry and Watches
The Cartier

Jewelry and Watches
The Art of Perfection by Michelle Ong