At the beginning of the 19th century, the academic school of Russian sculpture of small forms was formed. It was represented by a constellation of outstanding artisans. In 1830-1840, the Russian sculpture of small forms increasingly strives for historical concreteness of the image. Peter Karlovich Klodt (1805-1867) and Nikolay Stepanovich Pimenov (1812-1864) demonstrate specificity of the genre in their works. 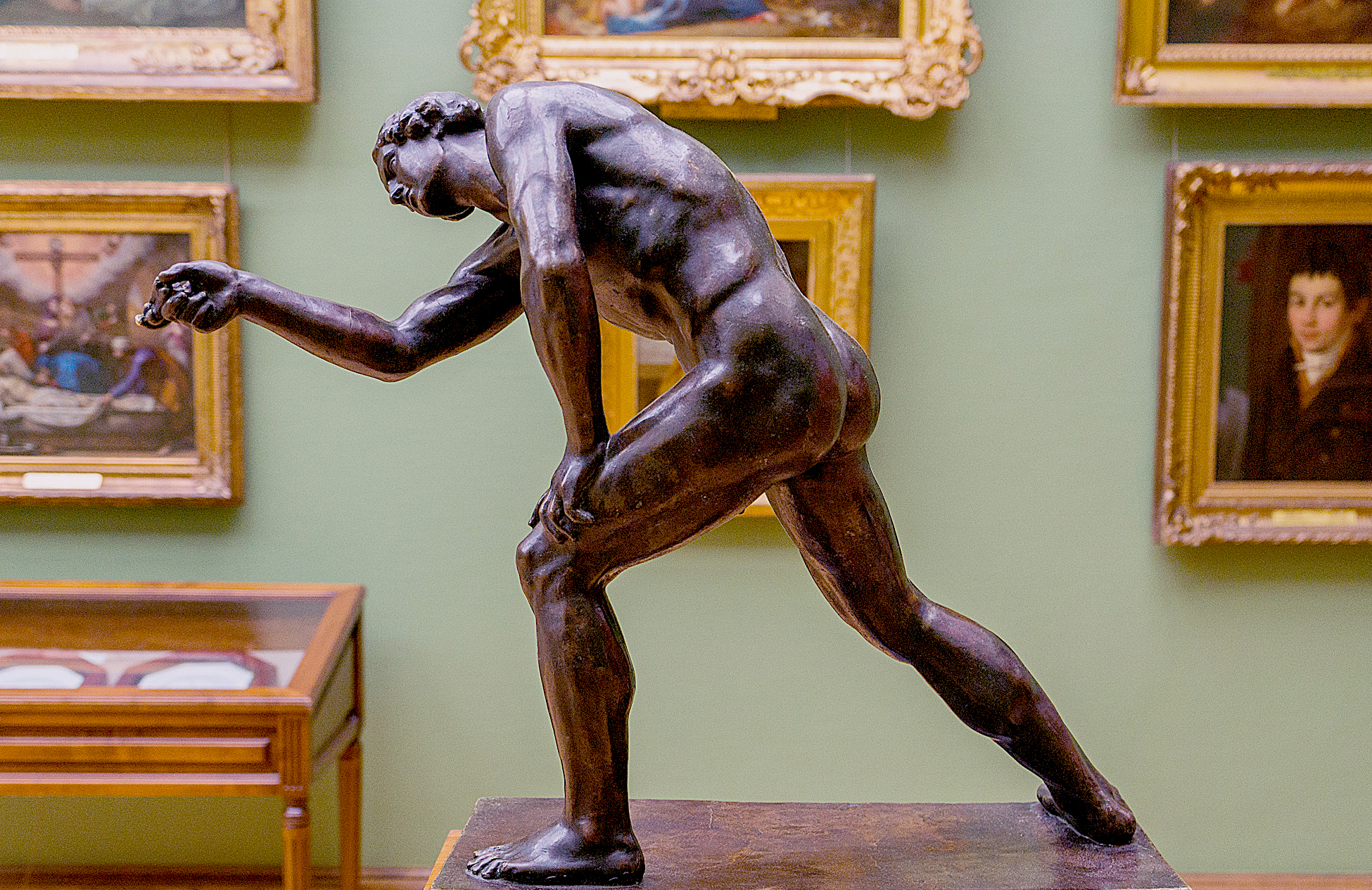 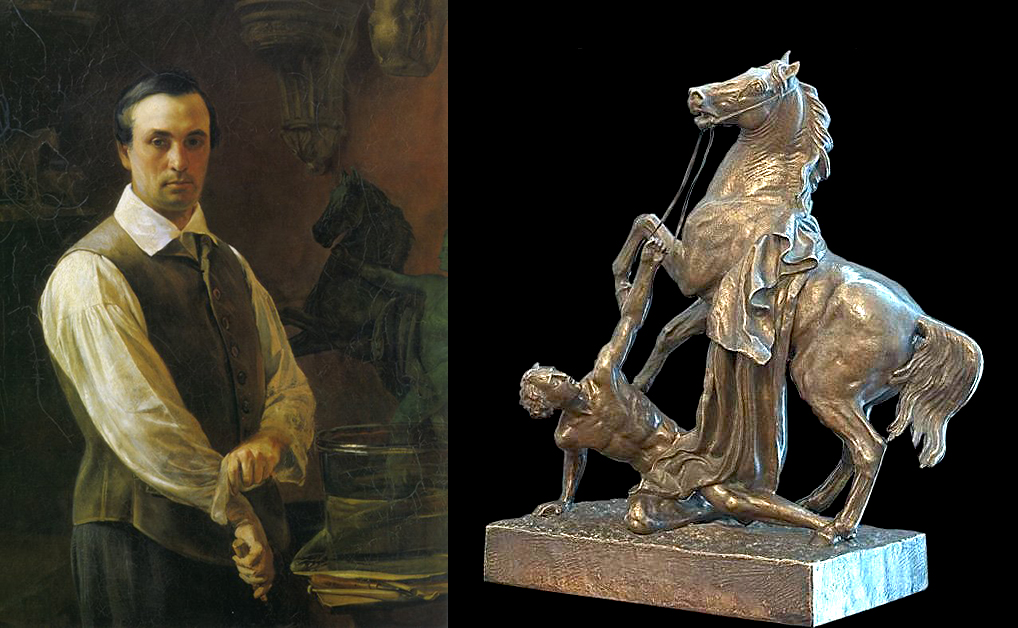 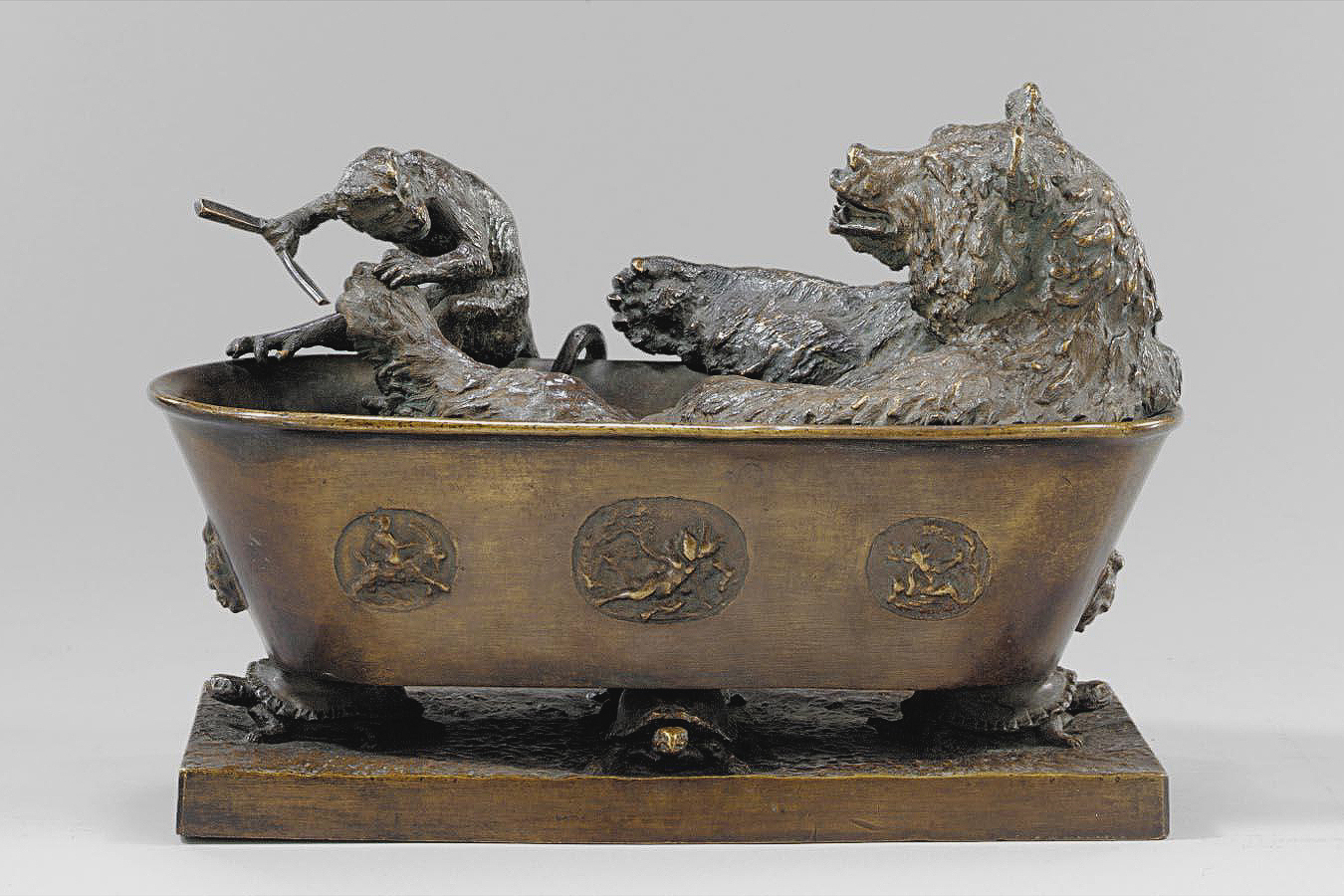 Christopher Fratin, "A Bear in the Bath Having Its Toenails Cut by a Monkey"
Sotheby's London 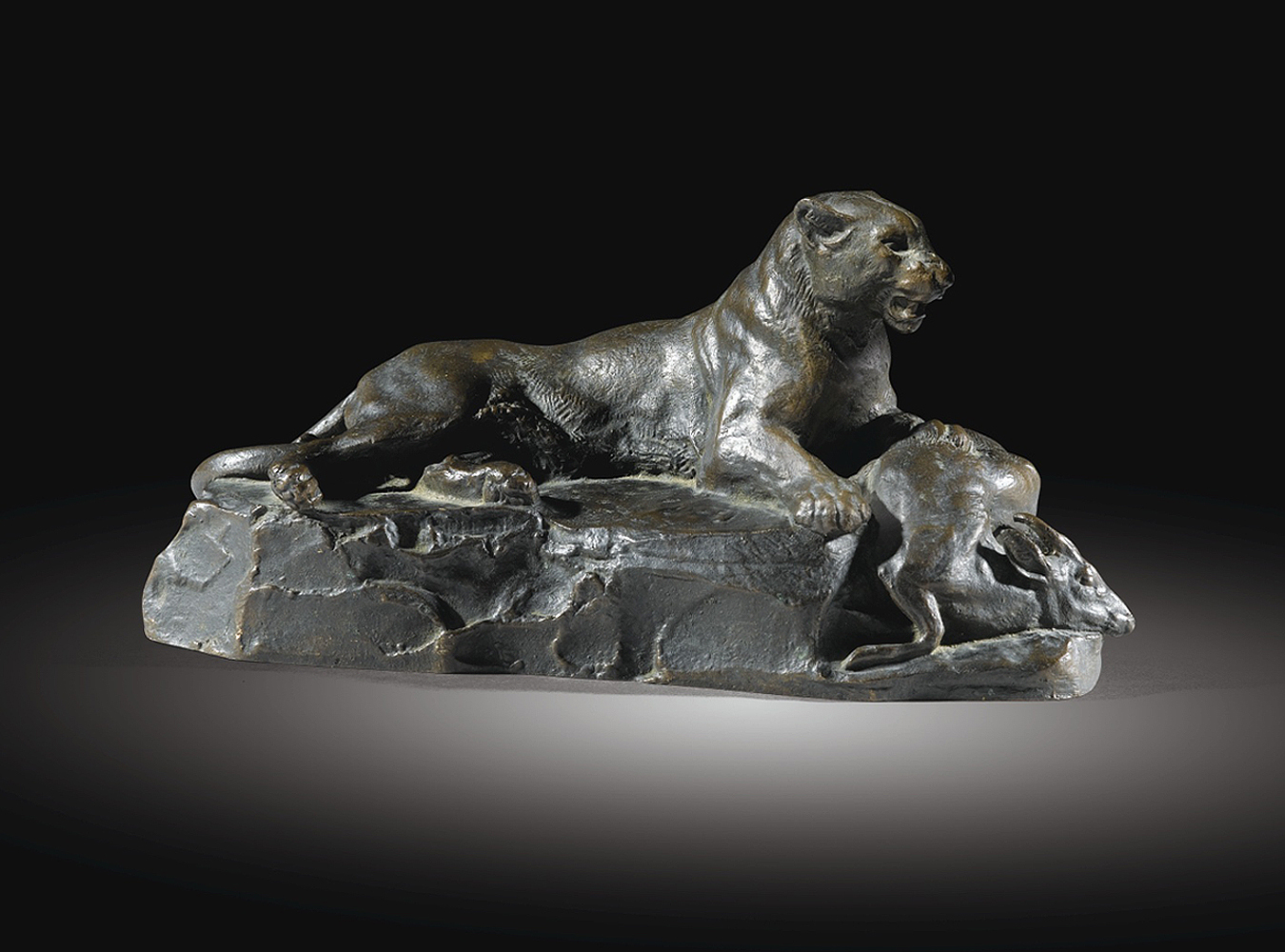 One of Parisian critics ironically called these sculptors "animalists", unaware that he gave the name to the whole sculptural genre. 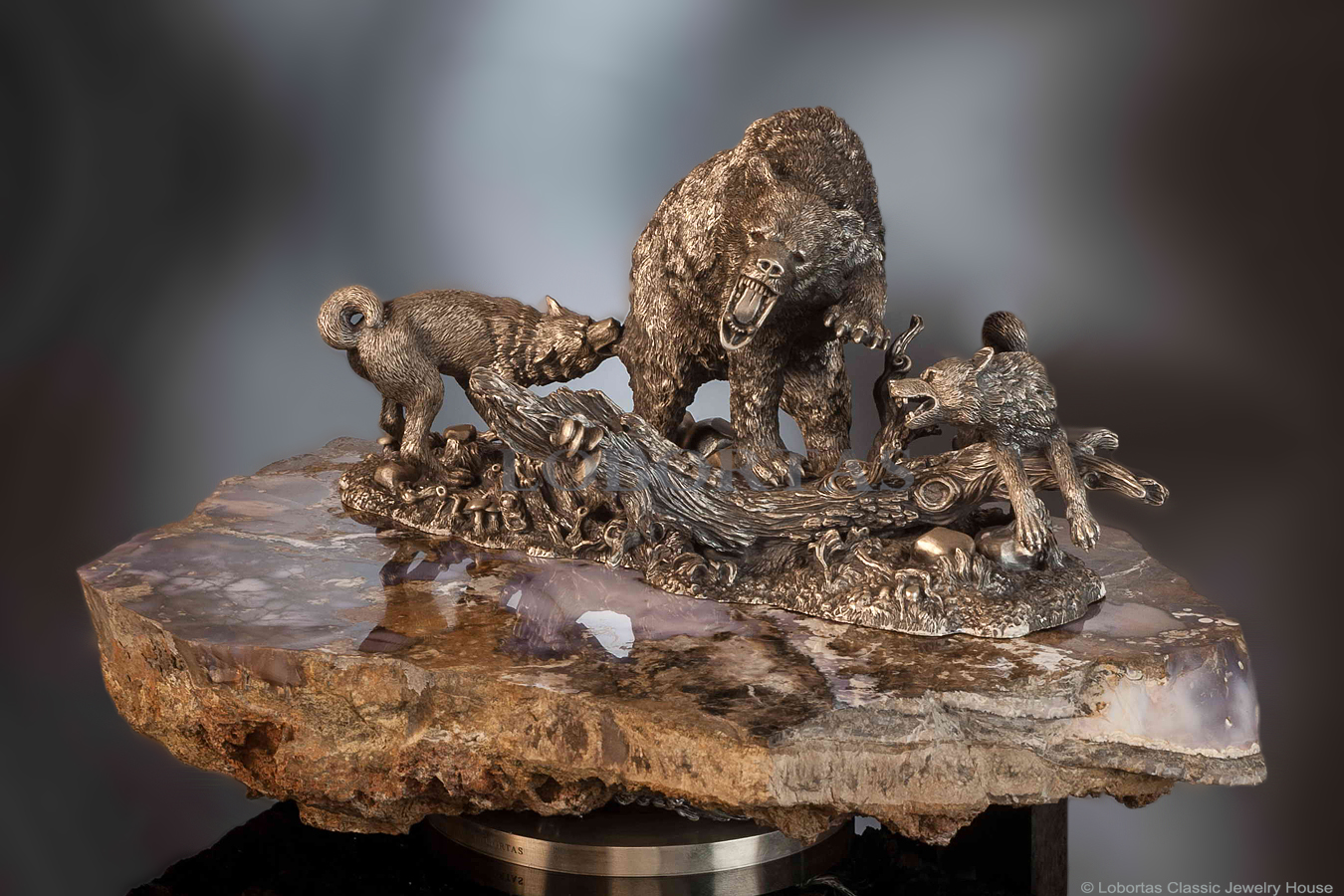 In the second half of the 19th century, the general process of the democratization of art was reflected in Russian and Western European sculpture. Classicism, which is now being reborn as a showroom art, is opposed by a realistic movement with its openly expressed social orientation, recognition of everyday life worthy of the artist’s attention, addressing the topic of labor, and problems of social morality. Aimé-Jules Dalou (1838-1902), Emmanuel Frémiet (1824-1910), Charles Valton (1851-1918) in France, Constantin Meunier (1831-1905) in Belgium are vivid representatives of this movement. 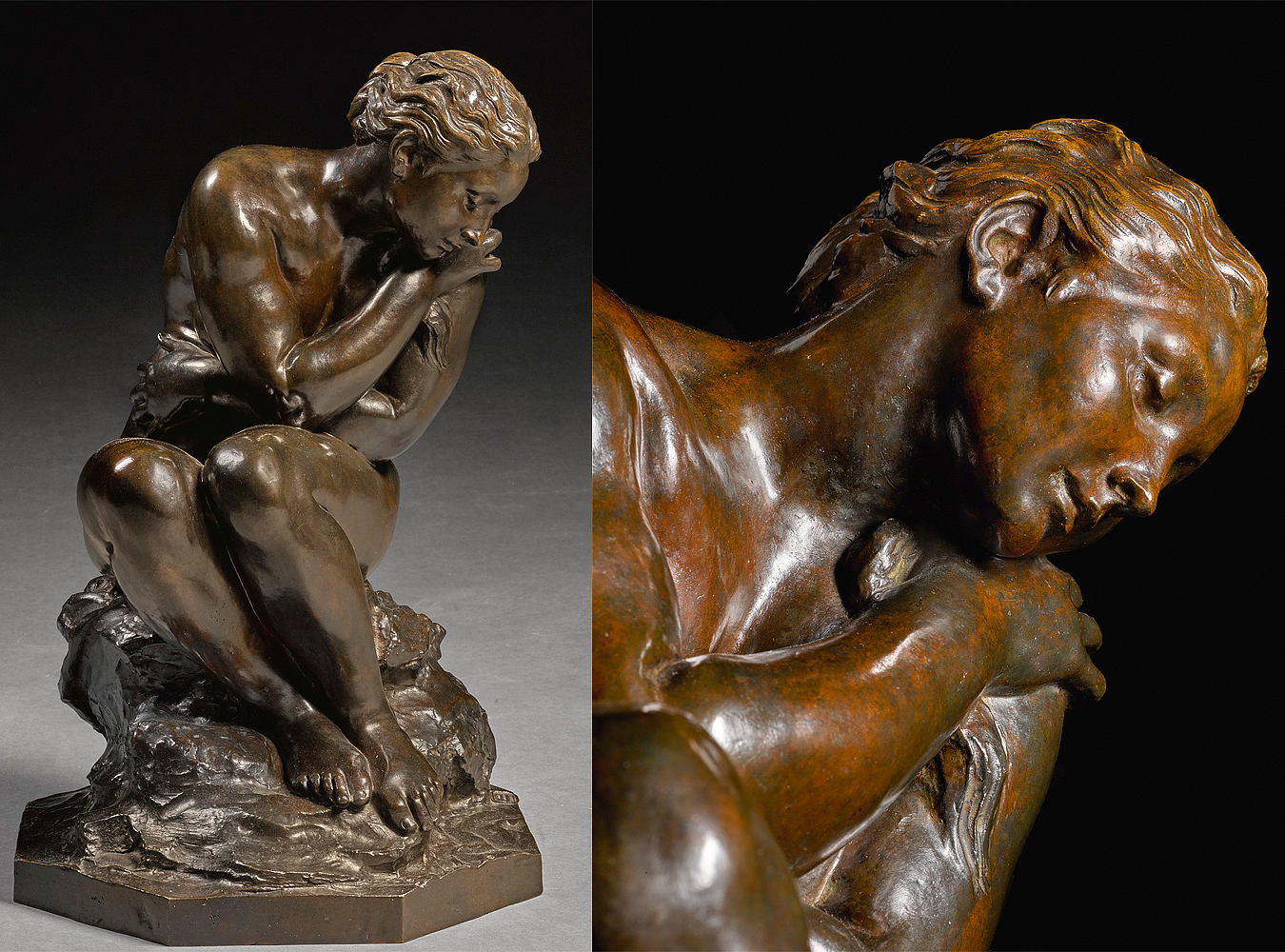 Realistic Russian sculpture of the second half of the 19th century is developed under the strong influence of the painting of the wanderers. 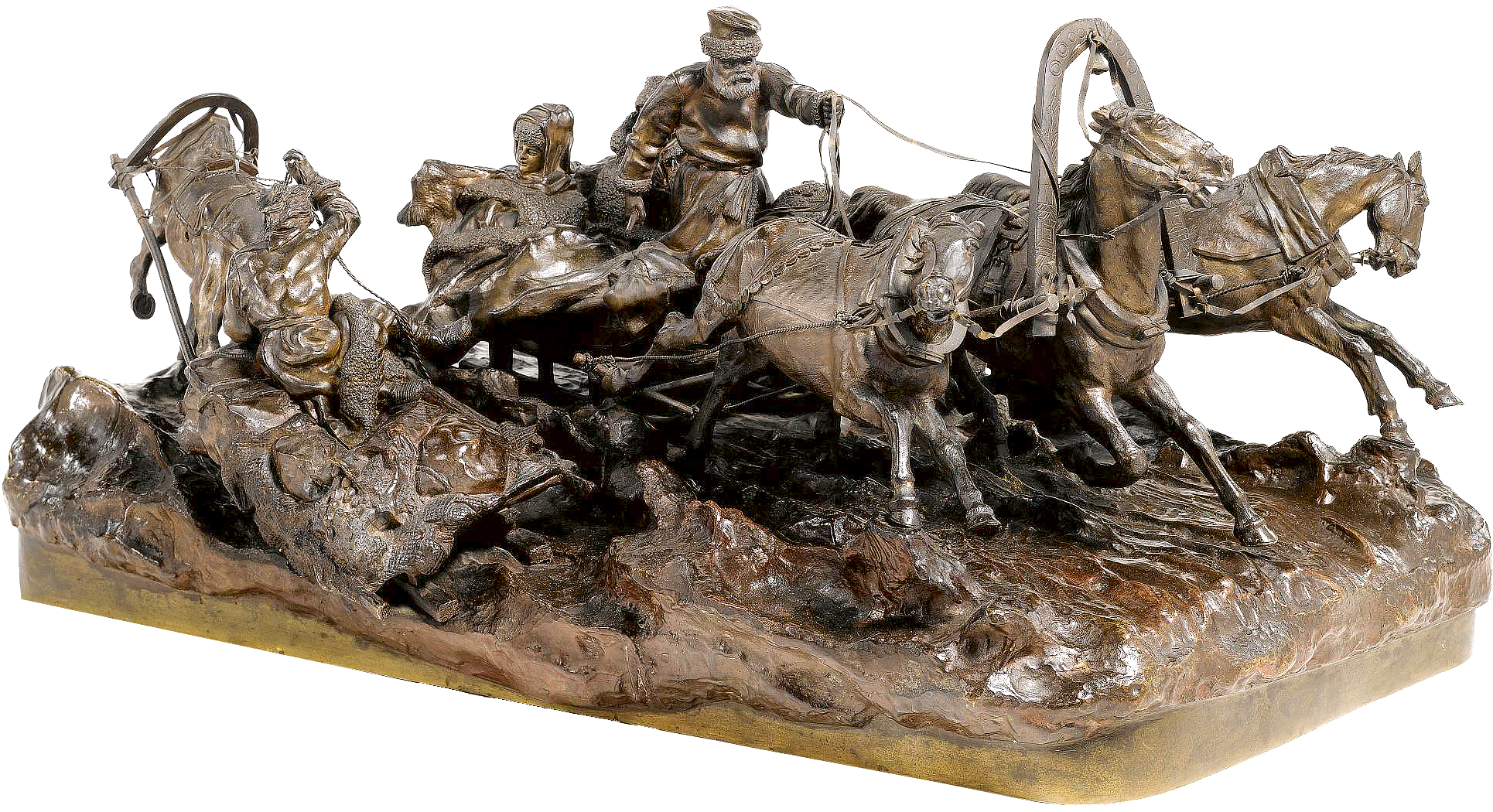 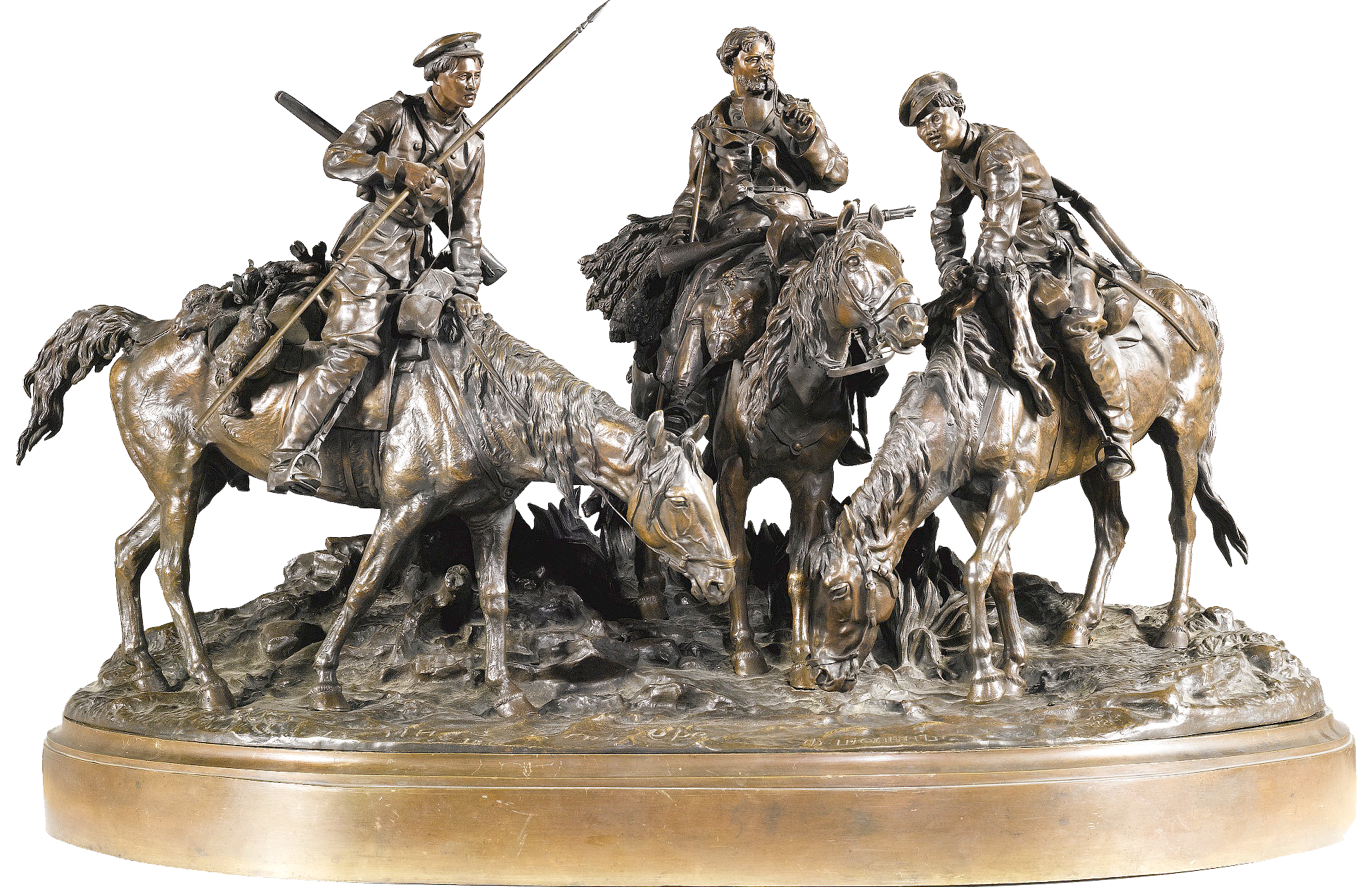 Eugène Alexandrovich Lanceray. "Don Cossacks on the Banks of the Danube".
Sotheby's London

The sculpture of small forms, in this period, develops in two directions – as the art of mass things and as the art of unique, isolated works. Nikolai Ivanovich Lieberich can be called the pearl of Russian sculpture, as he had a great originality and developed a unique style in which the traditions of academic art school and a deep understanding of nature are interwoven. 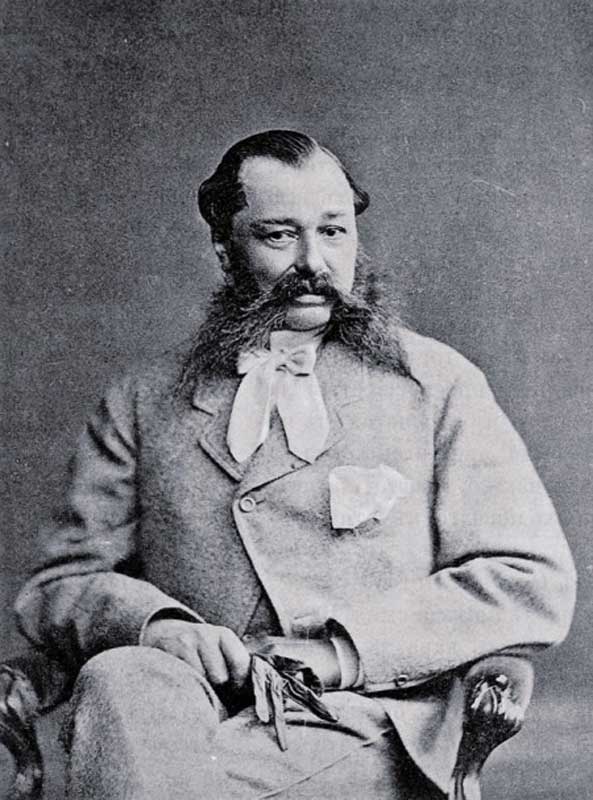 Lieberich was an apprentice of P. K. Klodt. The long years of military service and the ability to observe taught the sculptor to notice the most insignificant details that occur during hunting scenes, military battles, or in everyday situations. This vital sensitivity allowed the artisan to create a very realistic sculpture that accurately conveys the power, passion, tension of the moment in a variety of subjects. Lieberich demonstrates his knowledge and subtle understanding of the hunting scenes with the participation of dogs in the sculpture "Hunter and His Dogs Resting"; The scene of the end of the hare hunt is very realistic: a tired hunter, the horse is still tense, after galloping long, cutting off the paws of the hare to encourage hounds, looks not just as a hunter’s alms, but as a encouragement of a caring owner of the dogs loyal to him. 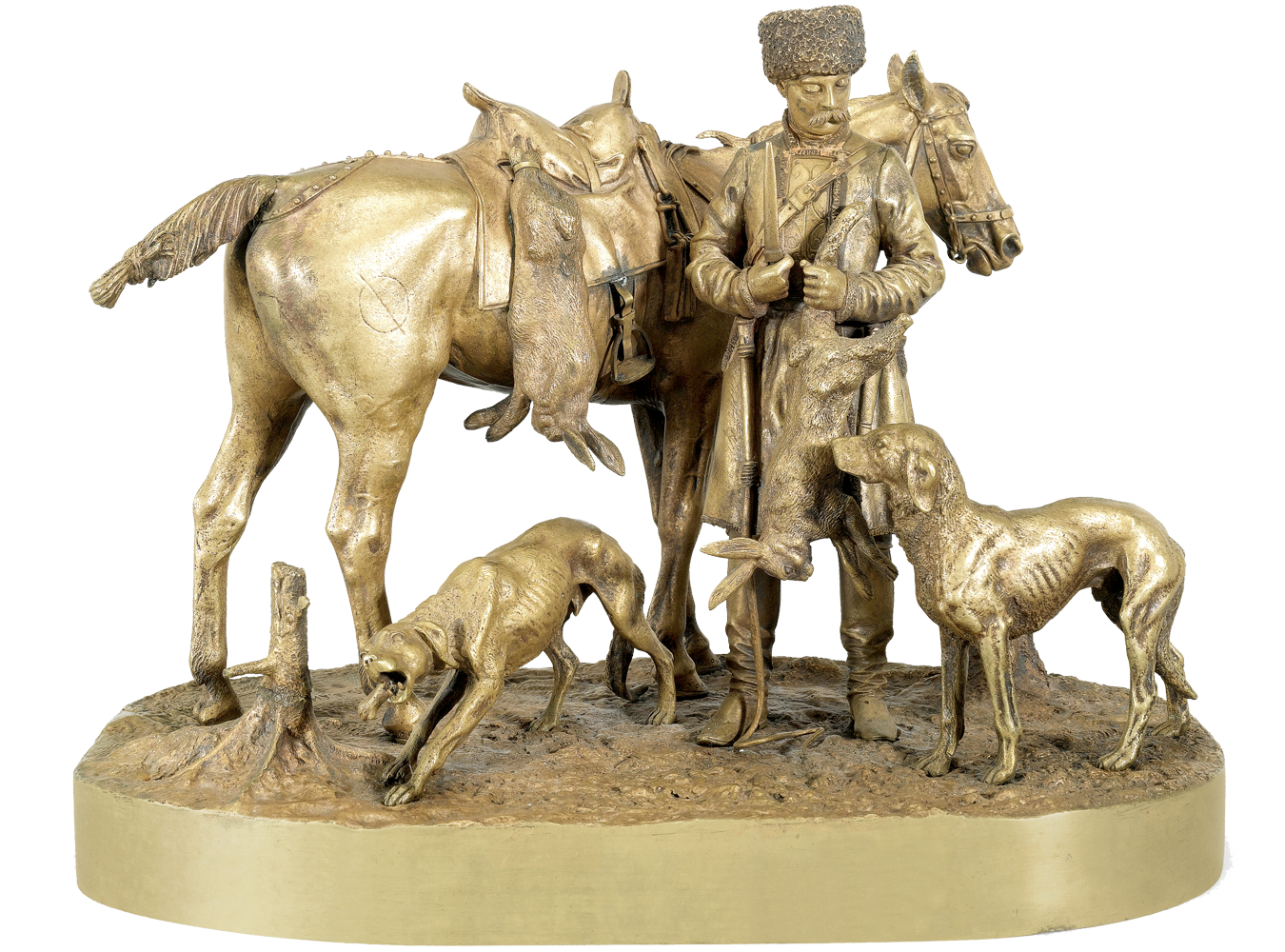 One of the frequent characters of his plots is a bear, very scrupulously and realistically fashioned by the artisan in each composition. One of the most famous works by Lieberich is the sculpture of The Lisino Bear. It captures a wary bear standing on its hind legs in order to have a better view and look deterrent in front of a possible opponent. 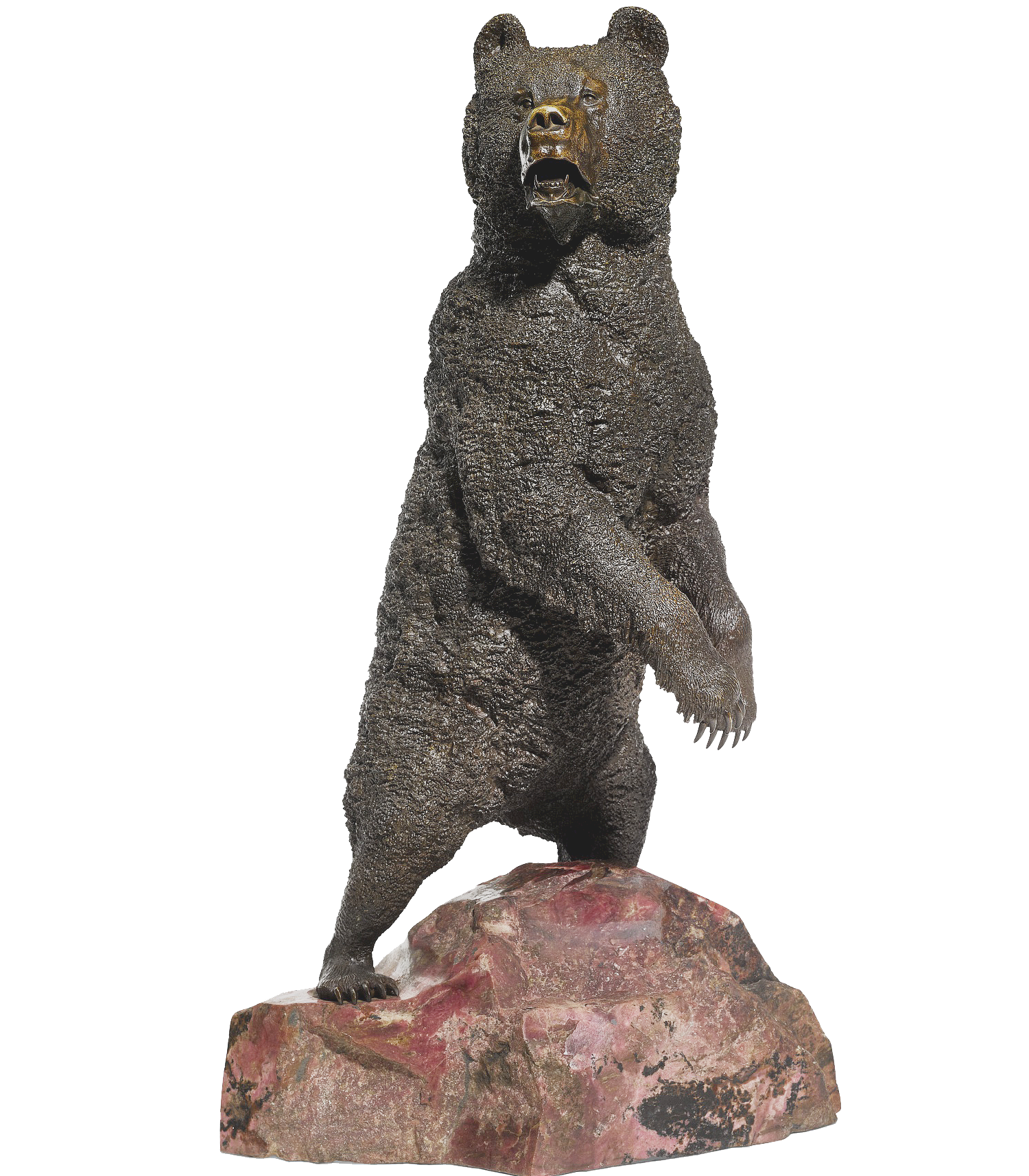 This sculpture reflects the real episode that occurred in 1865 with Emperor Alexander II during a hunt in the Lisino forest area.

Lieberich liked to make gifts to notable people or his friends on the occasion of some holidays. He crafted gift sculptures out of silver or bronze, approaching the work with the same care as for all other sculptures. 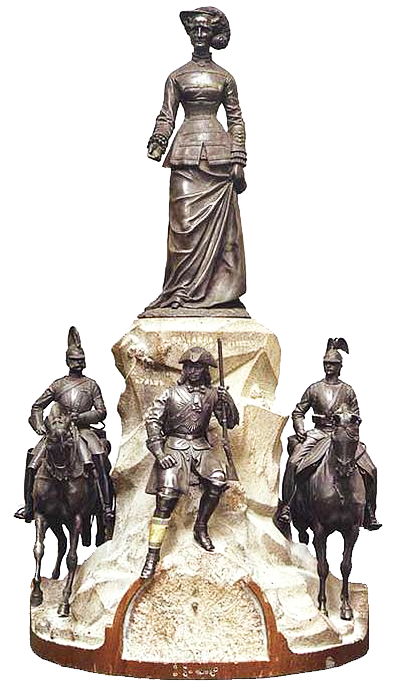 Sculptural composition as a gift to Alexander II.
N. I. Lieberich. 1880 Silver, granite.

In the composition devoted to the wolf hunt, the author very naturally conveys the dynamics of the hunting scene: a wolf exhausted, but still ready for a fierce fight, a rapidly racing horse, a greyhound practically flying over the ground, which is about to grab the prey, and a spring-loaded experienced rider in the saddle. 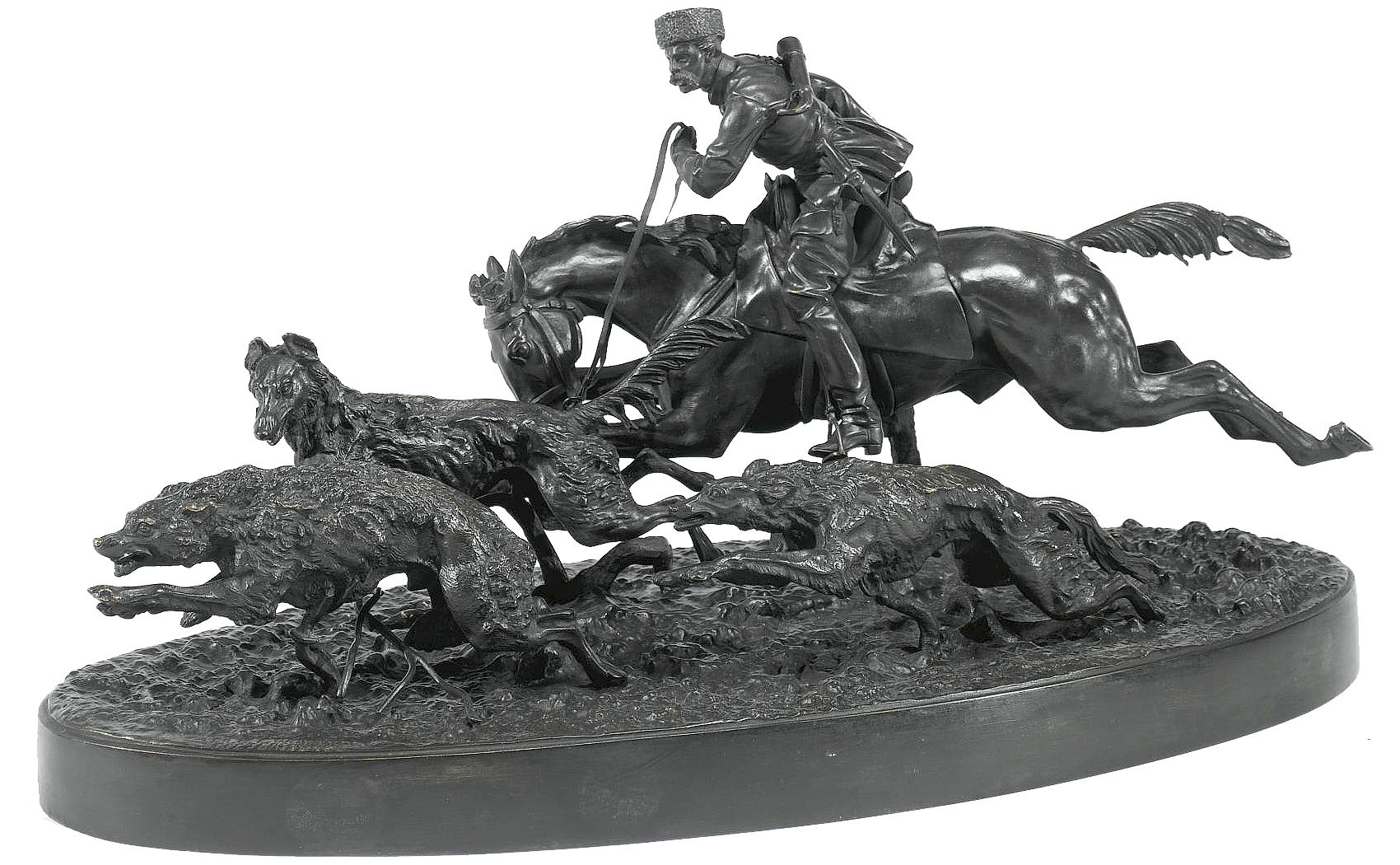 In hunting scenes, great attention is paid to dogs and horses. Judging by the depicted grace, the careful drawing of each small muscle of animals and their characteristic postures, Lieberich perfectly knew the habits of animals, their manner of movement, subtly noted the structure of their body. 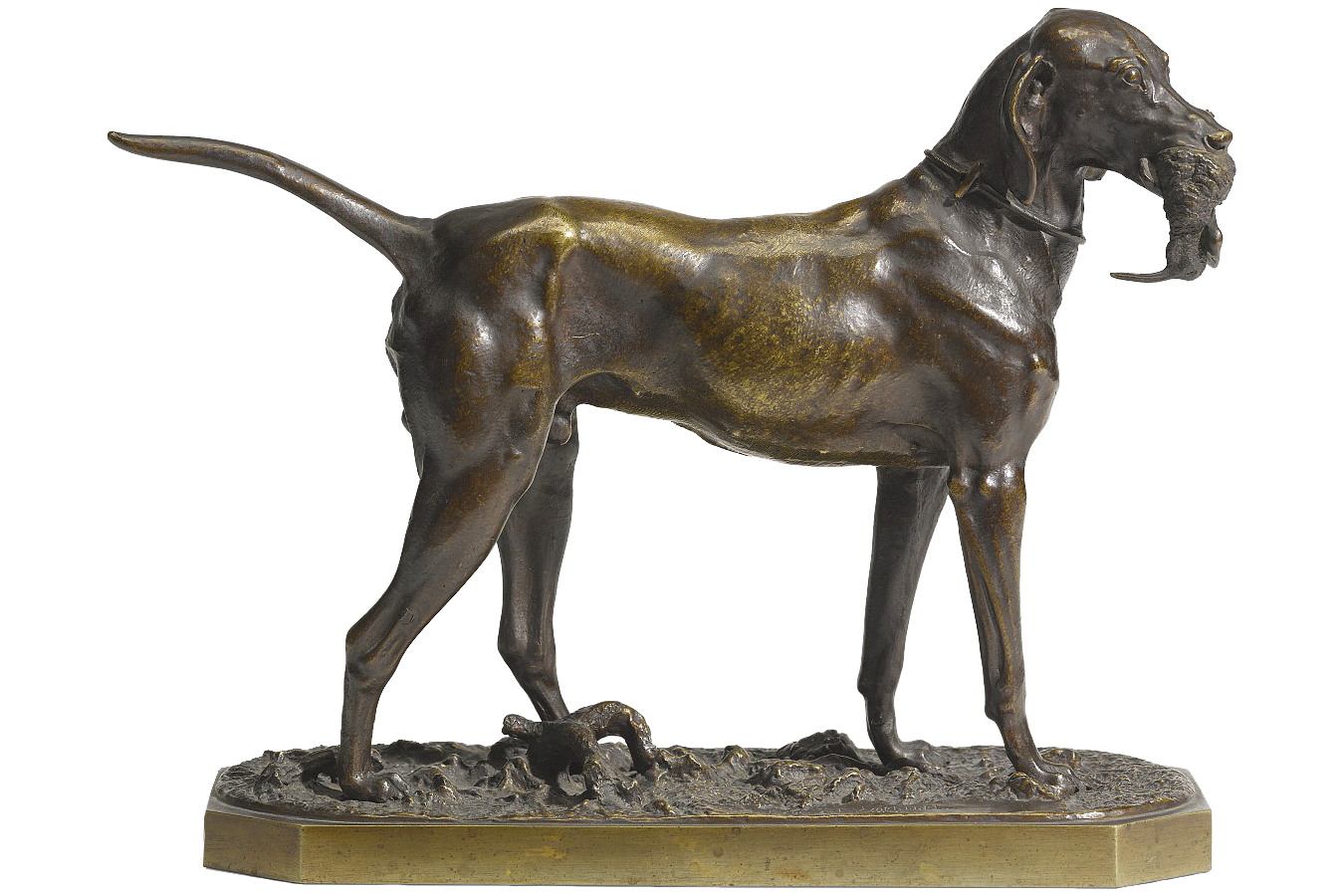 Many sculptors of this period, working in military, ethnographic and animalistic themes, were in many ways equal to Lieberich. Sculptures by Lieberich were the first Russian works, widely represented abroad at major exhibitions such as the World Art and Industry Exhibition in London (1862, 1872), Paris (1867), Vienna (1873) and at the exhibitions of the Imperial Academy of Arts (1857–1883). For his creative work, the artisan received a number of well-deserved awards. In 1858, he was awarded with a small silver medal for the historical sculpture of Mazepa. 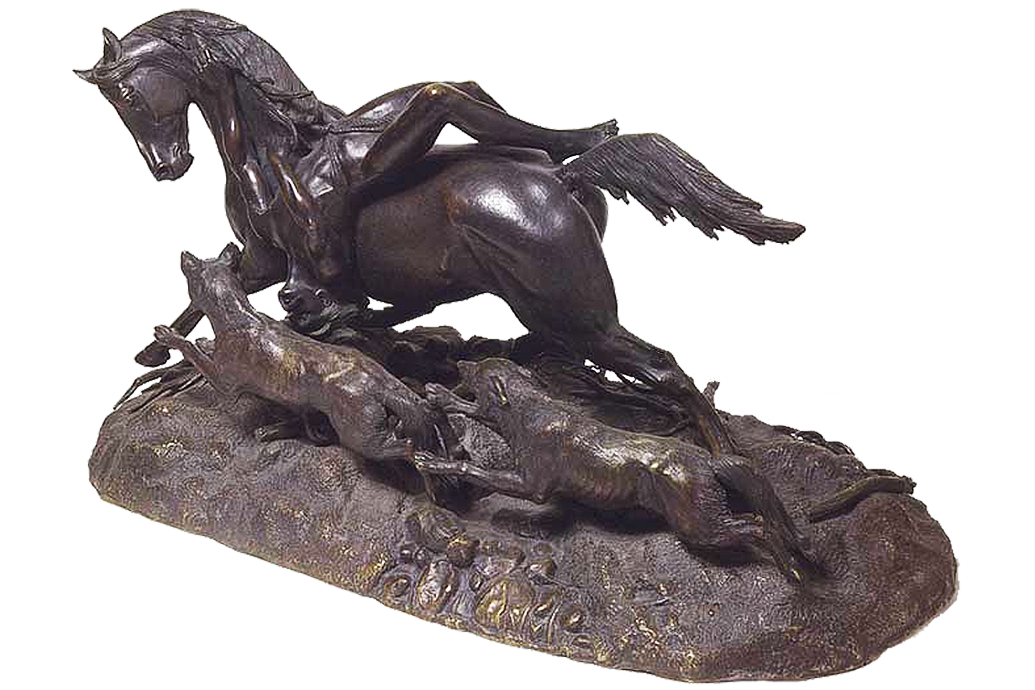 The image of the Ukrainian hetman Ivan Mazepa, sung at the same time in Byron’s romantic poem of the same name, did not leave the canvases of famous authors and lines of famous poets. Probably, Nikolai Ivanovich could leave such attention to the historical character unnoticed. In many works of art, Mazepa is shown surrounded by people who have condemned him, but Lieberich put not conviction, but the gravity of the situation, a very young person being persecuted in the first place. For the striking sculptural groups on the hunting theme of Lieberich in 1861, he was awarded the title of academician for the ability to create a very realistic sculpture that accurately conveys power, passion, and momentum in a wide variety of subjects.

Modern animalistic small plastic is the world of the most different “characters”, “temperaments”, habits, the world of natural expediency of forms, colors, movements where animal portraits that reveal the inner image of a particular animal are created by artisans. 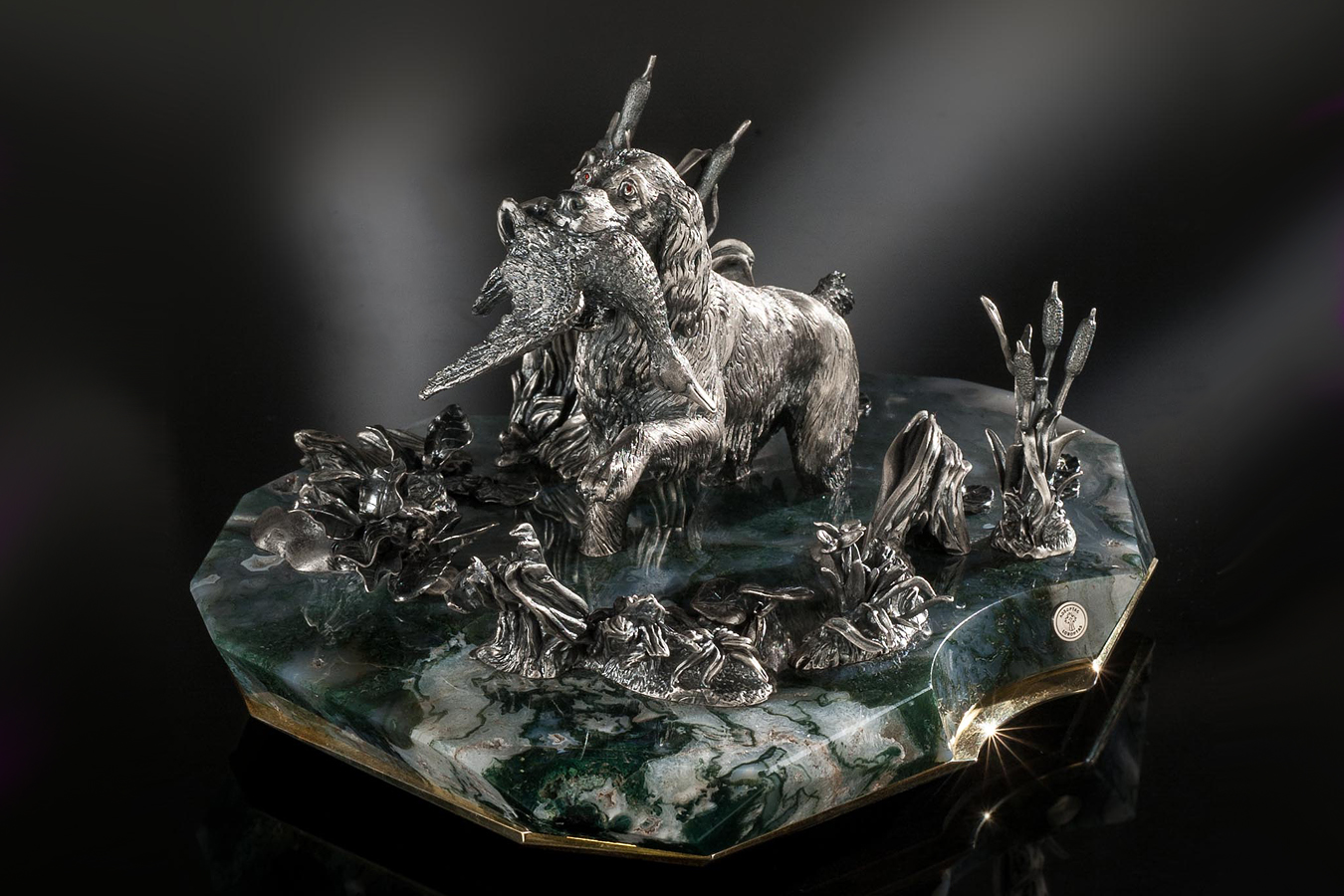