Academically finely executed sculptural composition with the creation of a true image of her contemporary and physical addition to the portrayed character is typical of all the creative work of Elena Alexandrovna Janson-Manizer. Statuettes, based on sports and classical ballet, cast after the models of Elena Alexandrovna, constitute the "Golden Fund" of the 20th century's small scale sculpture and many of them are stored in the museum collections. All the characters of the sculptor are convincingly expressive and ideal, in their physical beauty, the dynamics of their poses is full of great inner expression, perfectly conveying the intensity of the sports contest and the personal desire to win. 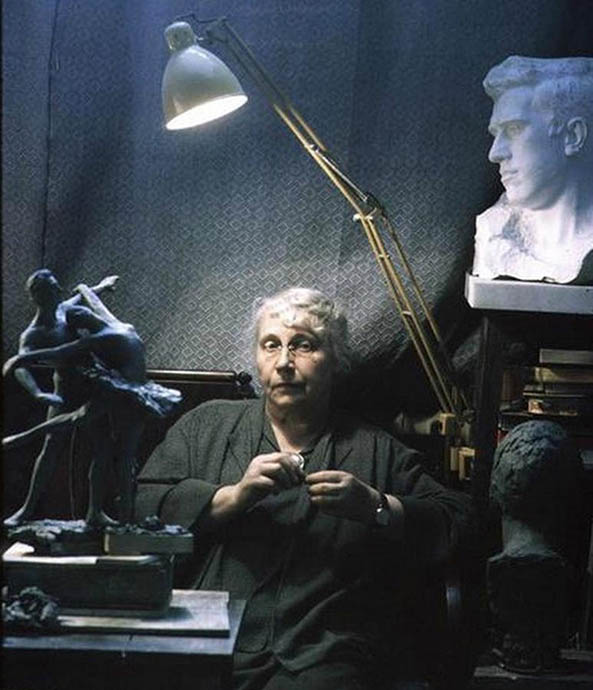 Elena Janson was born in 1890, in the family of Peterhof artisan. After graduating from high school in 1911, she entered the private women's courses of higher architectural knowledge headed by Elena Felixovna Bagaeva in St. Petersburg. 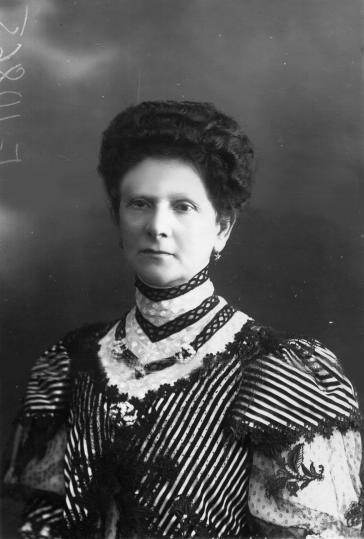 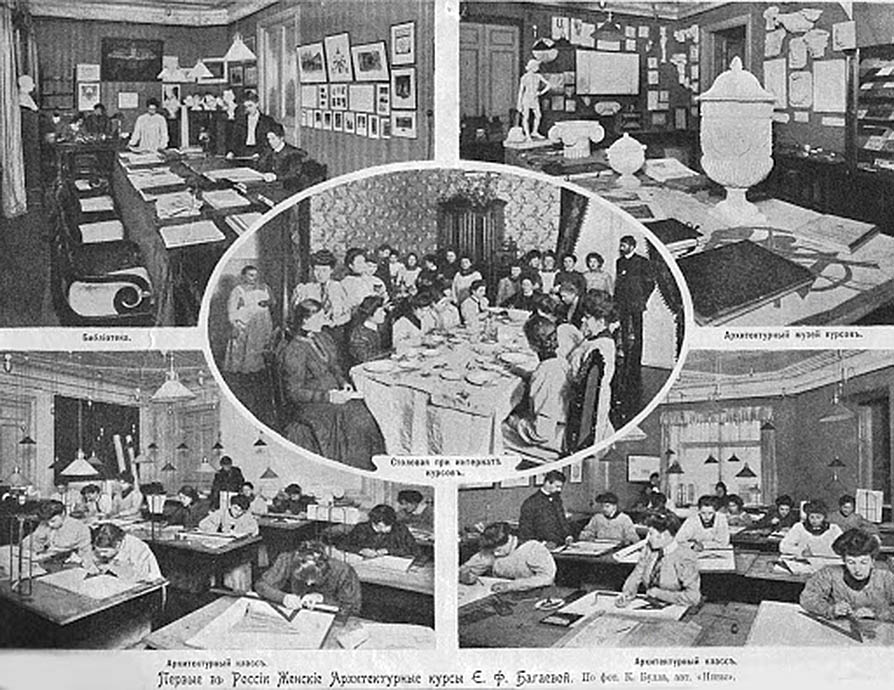 Since 1914, Elena continues her studies at the architectural faculty of the Polytechnic Institute, and, without graduating therefrom, in 1917, she moved to the architectural faculty of the Petrograd State Free Art Educational Workshops (PGSKhUM), combining her studies with the work of the draftswoman. She takes part in archaeological expeditions in Bakhchisarai, Kerch, Kherson. Since 1918, Elena has been working as an assistant to the theatre decorator at the First State Puppet Theatre (E. S. Demmeny St. Petersburg State Puppet Theater), it is her to sculpt and carve doll figurines of wood. 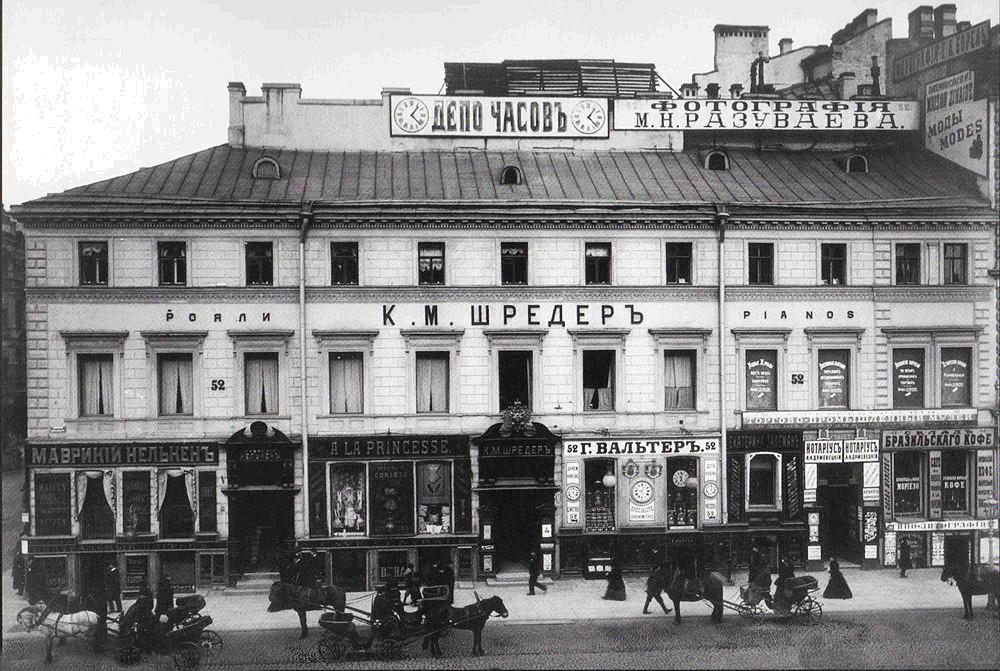 St. Petersburg, 52 Nevsky Prospect. In this house, in 1918,
a group of Petrograd artists will create the first professional puppet theater.

It is difficult to overestimate the role played by the Lenin's plan of monumental propaganda for the development of Soviet sculpture. The well-known decree of the Council of People's Commissars dated April 12, 1918, calling "to mobilize the artistic forces and organize a wide competition for the development of projects of monuments to mark the great days of the Russian Socialist Revolution", has set the sculpture unusually large and important tasks. It stressed the usefulness and necessity of the sculptor's work in the new society. 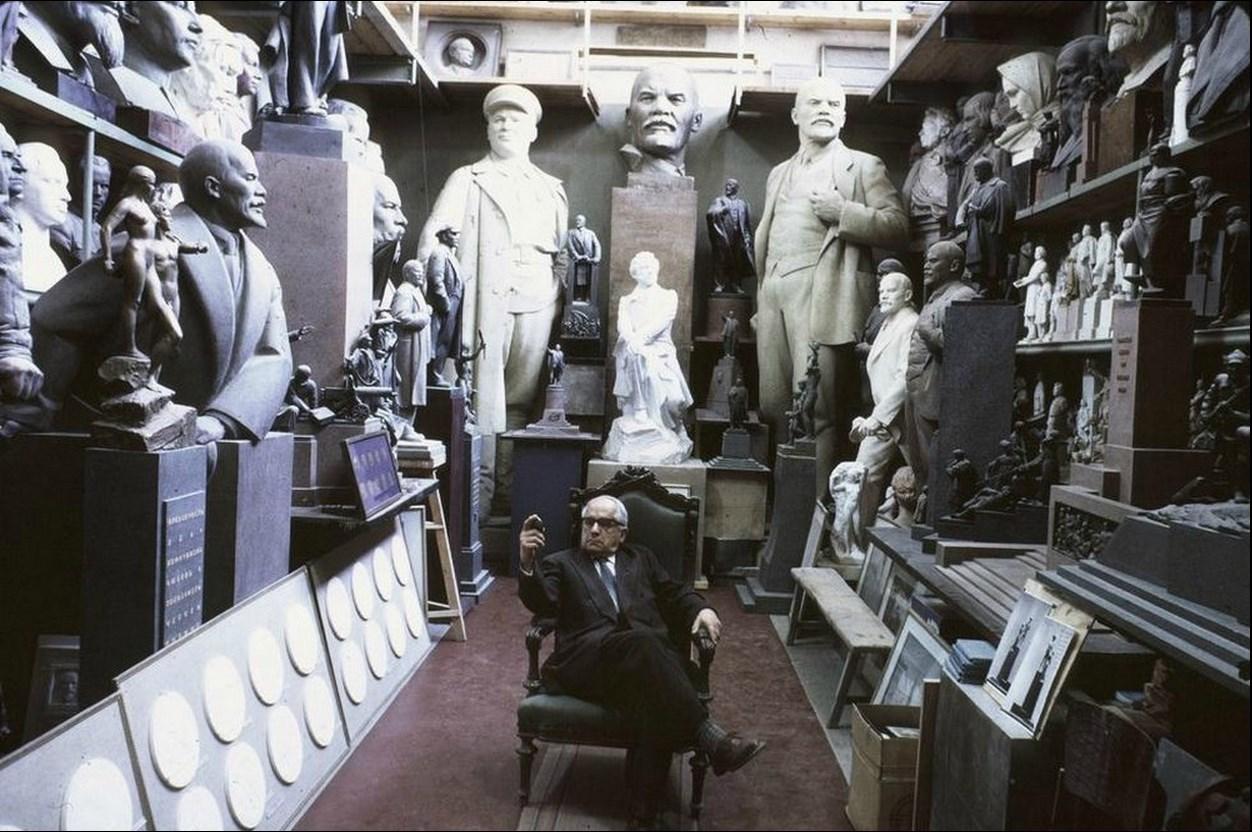 Matvey Genrikhovich Manizer in his Studio.

Elena is actively working in the Studio, by constantly improving her skills. In 1924, Janson took part in the competition of projects of the monument to V. I. Lenin at the Finland station, for which she got the fifth prize. In 1925, by having presented four sculptural works as the defense thesis, Elena Janson finishes her studies at the Petrograd Higher Art and Technical Institute.

The general great goal set by the revolution for the artists gradually rallied the Soviet sculptors, contributed to the development of their new worldview. Yet in 1917, the Creative Union of Sculptors and Artists was created. S. T. Konenkov was its first Chairman. 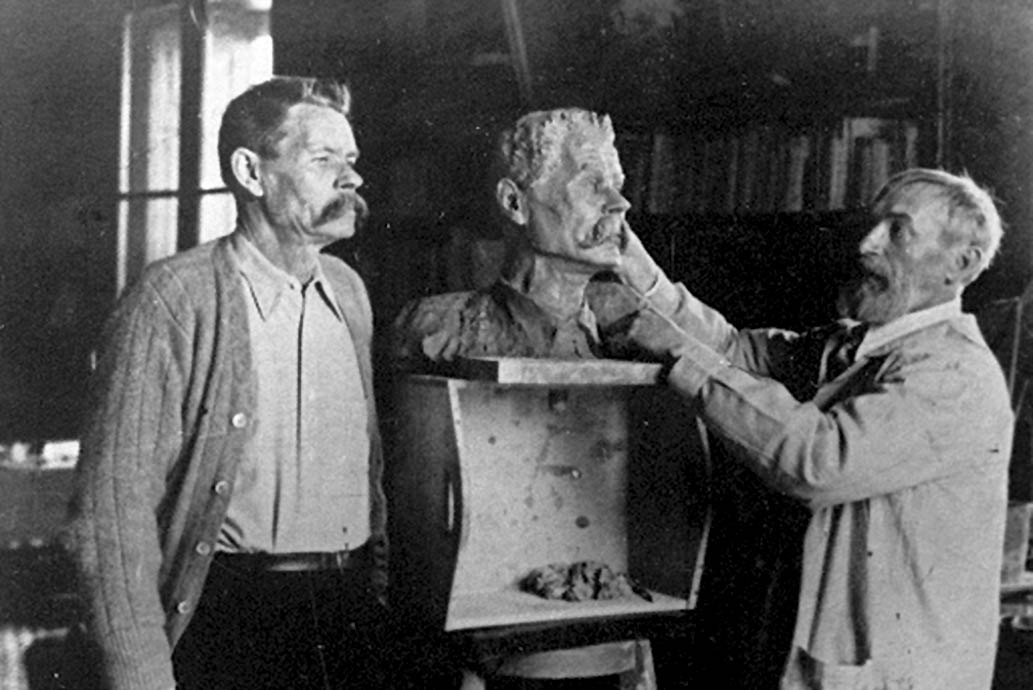 In 1926, the Society of Russian Sculptors was organized and a little earlier, in 1925, the sculptural section of the AKhRR (Association of Artists of Revolutionary Russia) was established. These associations included almost all the forces of sculptors available, which were constantly replenished with graduates from art schools. In 1925, Elena Janson became a member of the AKhRR as well. In 1926, Elena marries her teacher Matvey Manizer. A deep interest in the person, the desire to fully reveal its spiritual world, the relation to reality have stipulated fruitful development of the sculptural portrait in the 1920s. In some cases, sculptors directly developed the best that carried a pre-revolutionary portrait – its special psychological depth, spirituality, a sense of human connection with the world. 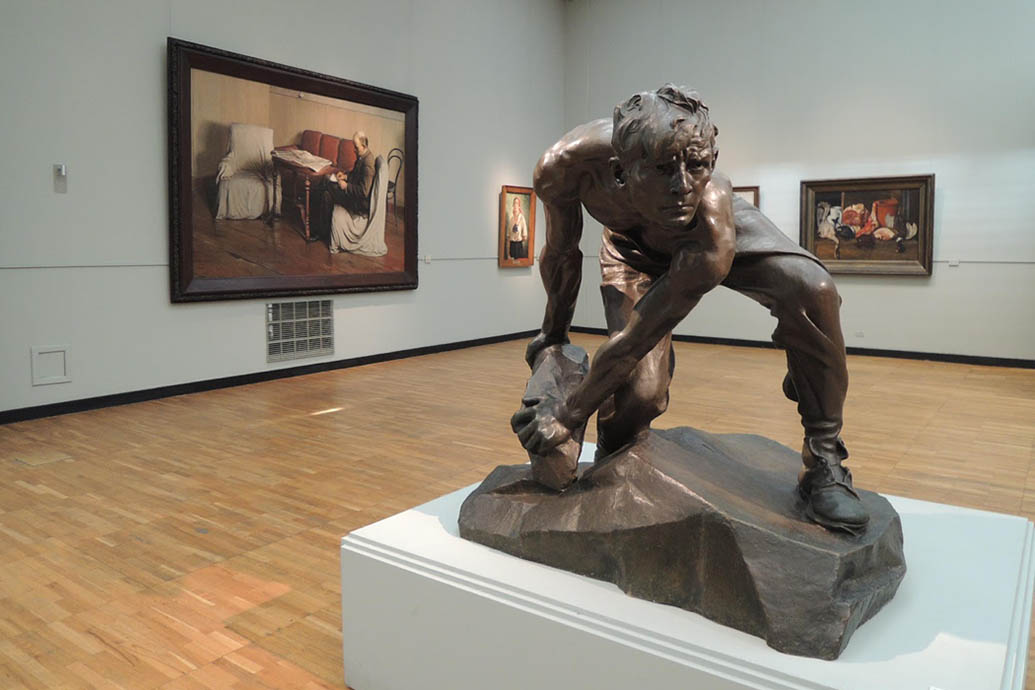 Portrait, not only requiring the achievement of similarities with the original, but also forcing the artist to focus on human psychology, has played a very important role in the work of many sculptors in the process of mastering the principles of realism. When, in the young Soviet State, the party and the government showed care and attention to the general development of physical culture and sports, sports-based compositions start to appear for the first time in the creative work of Elena Janson-Manizer. In 1926, Elena creates, brilliant, on the artistic merits, series of statuettes – Swimming Start, Female Basketball Player, Football Player, Putter, which in the 1930s were increased, cast in bronze and installed in the parks of culture and recreation of Moscow and Leningrad. The Football Player is one of the artist's most successful and perfect sculptures in terms of creativity. 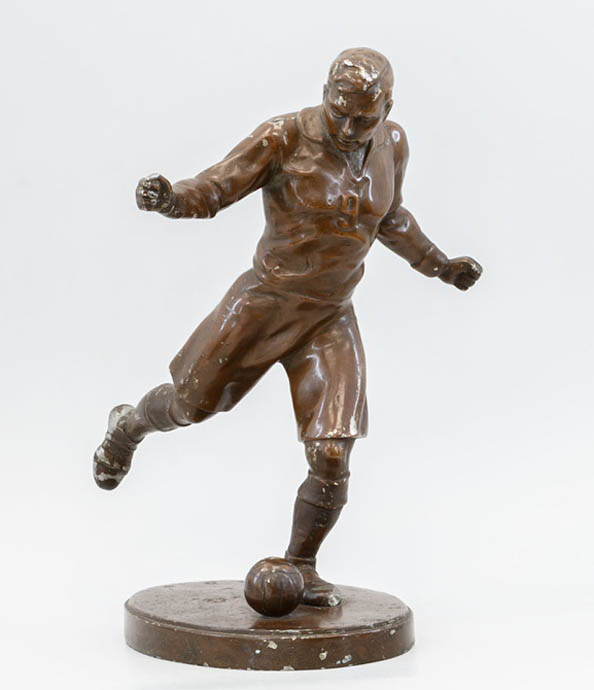 Sculpture of the Football Player, the 1926 model. Bronze E. A. Janson-Manizer.

The main advantage of the sculpture is a great realistic accuracy in the transfer of anatomical characteristics of the well-muscled human body, in a convincing display of rapid throw, run, and the moment of impact on the ball. Sculpture of the Worker, created in the period from 1936 to 1939, is a good example of single, one-copy, custom-made, gift items for representatives of the highest party and Soviet leadership of the USSR. This sculpture is the author's version, a small-scale sculptural replica of bronze, monumental sculpture of "worker", which Elena Janson-Manizer together with her husband Matvey Manizer created for the Revolution Square metro station of Moscow. 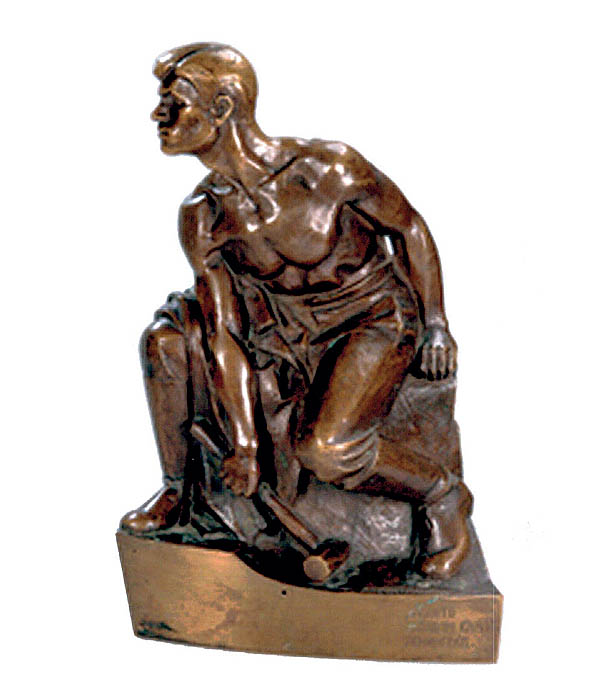 The sculpture is made at a high professional artistic level, with excellent sculptural and plastic study of the worker's figure in the manner of sculptural impressionism, and with impeccable quality of performance in the material. Its originality and uniqueness is emphasized by the time of manufacture, small number of works of the authorial small-scale sculptures art in bronze in the 1930s, and the fact that it was custom-made only, for presentation of gifts to the leadership of the party and the country. Despite the diverse nature of the work, Elena Janson-Manizer's favorite topic was always the image of dance. From 1934 to 1937, Elena created a series of seven sculptures based on ballets of Swan Lake, The Fountain of Bakhchisarai, Romeo and Juliet, Egyptian Nights. 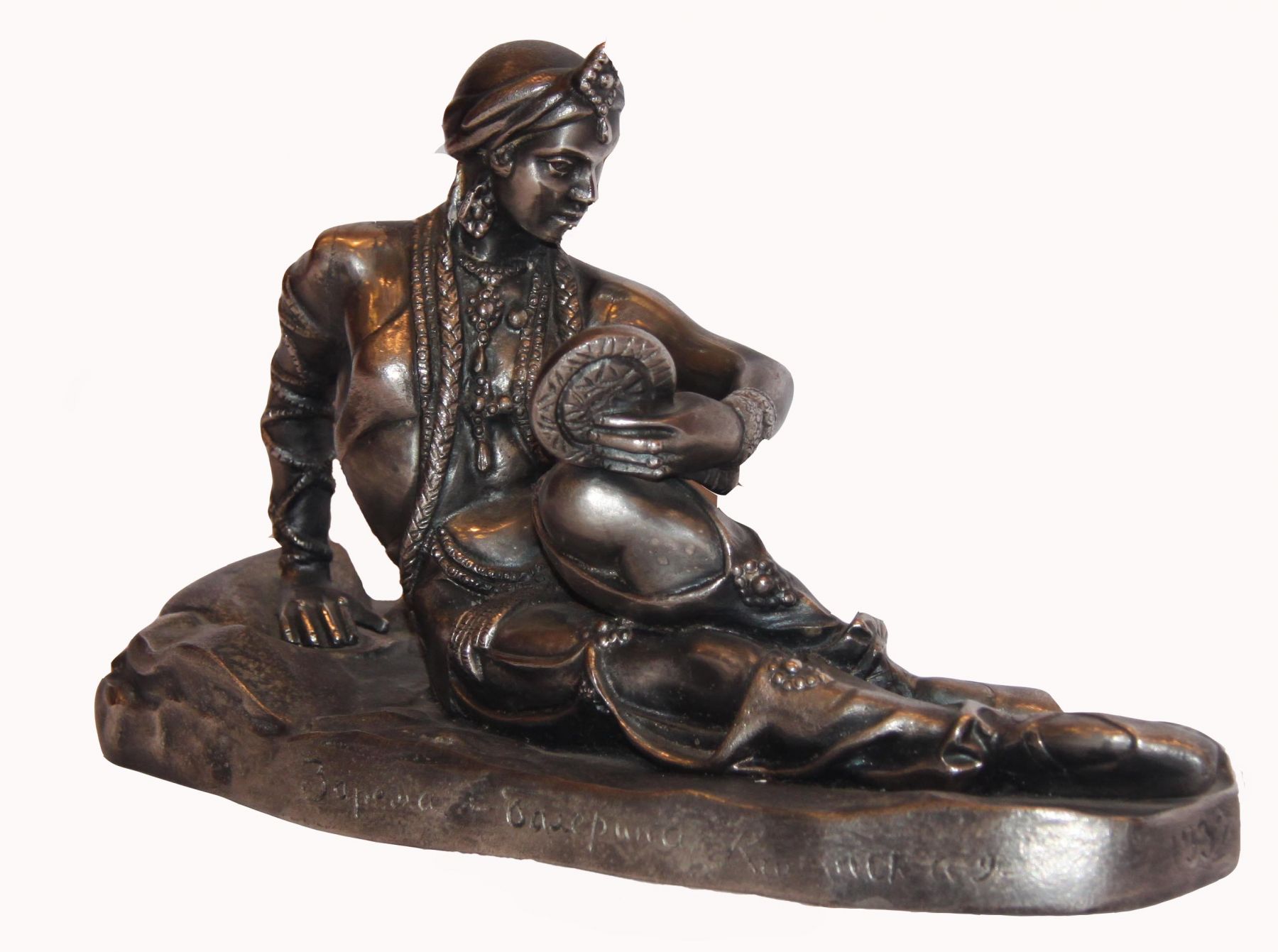 With a large portrait likeness, the sculpture of Speed Skater shows a Soviet sportswoman Maria G. Isakova, an undisputed champion of the world (1948-1950) and of the USSR (1945-1949) in speed skating. The statuette is made at a high artistic and technical level and has a great realistic fidelity in the transmission of the image of the famous sportswoman, shown at the time of the sports competition. 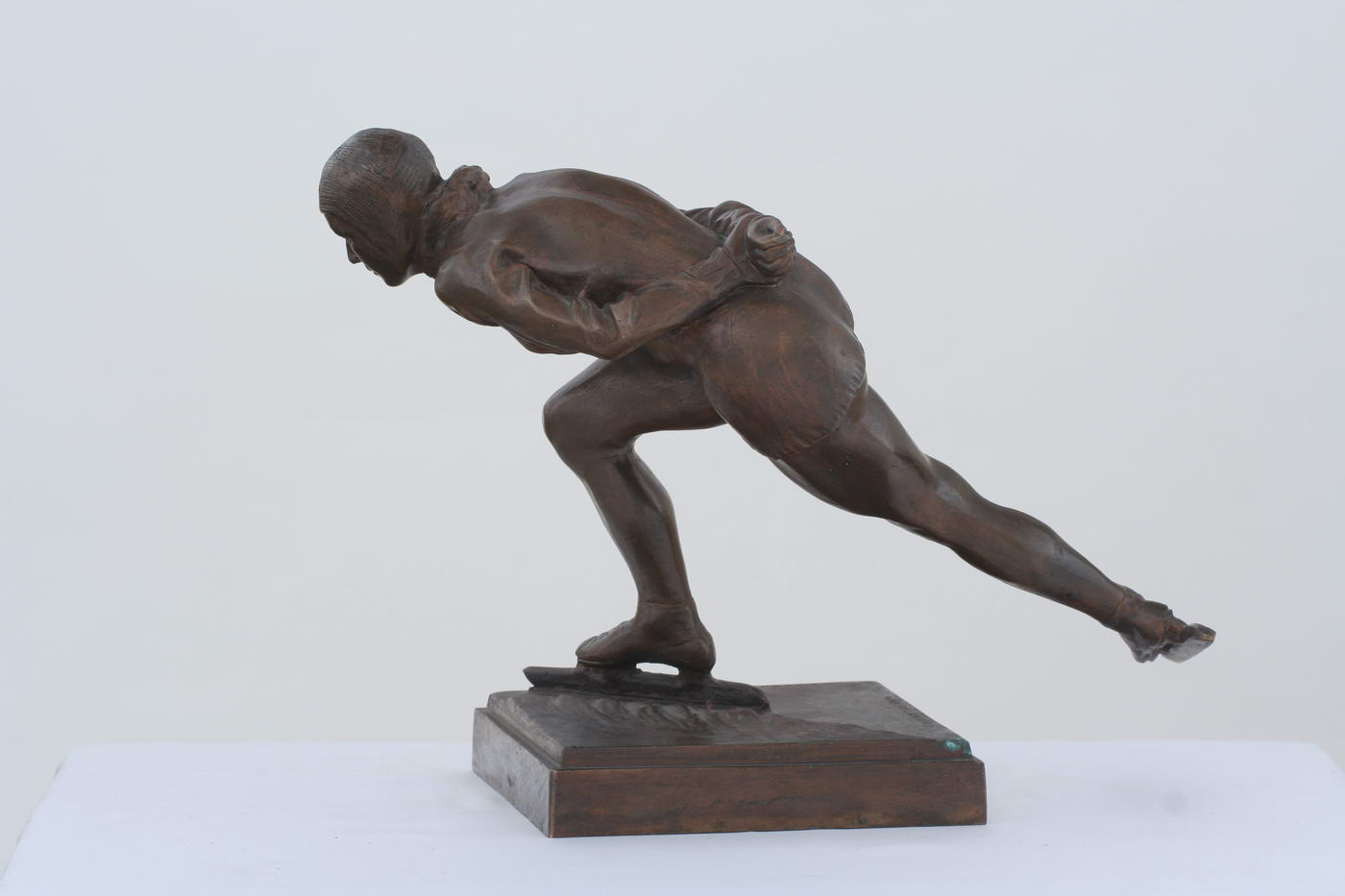 In the 1950s, Elena made a series of figurines: Giray Sitting, Giray Cloaked, Zarema Holding A Mirror, Zarema Holding A Dagger, Maria Wearing A Scarf, and Maria Sitting for the Lomonosov Porcelain Factory. In addition, sculptures: Ballerina Kaminskaya As Zarema, Maya Plisetskaya In Dance Of The Persian Slaves, Spanish Girl With A Fan, were successfully replicated (from 1950s to 1980s). Some of the statues made in porcelain were later repeated in cast iron. 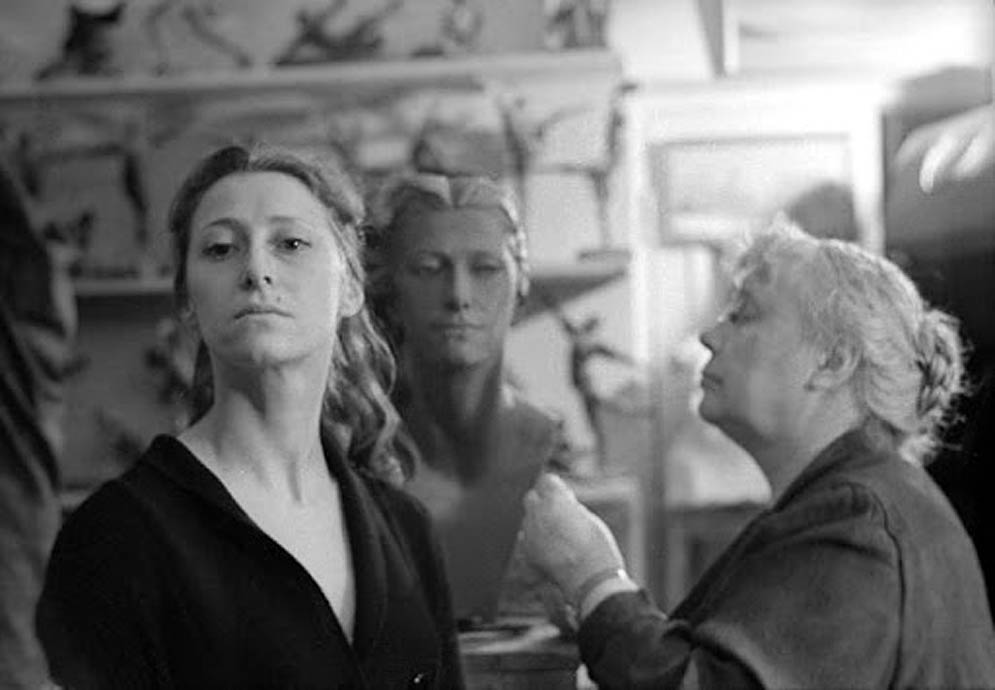 Maya Plisetskaya in the Studio of E. A. Janson-Manizer, 1960, Moscow 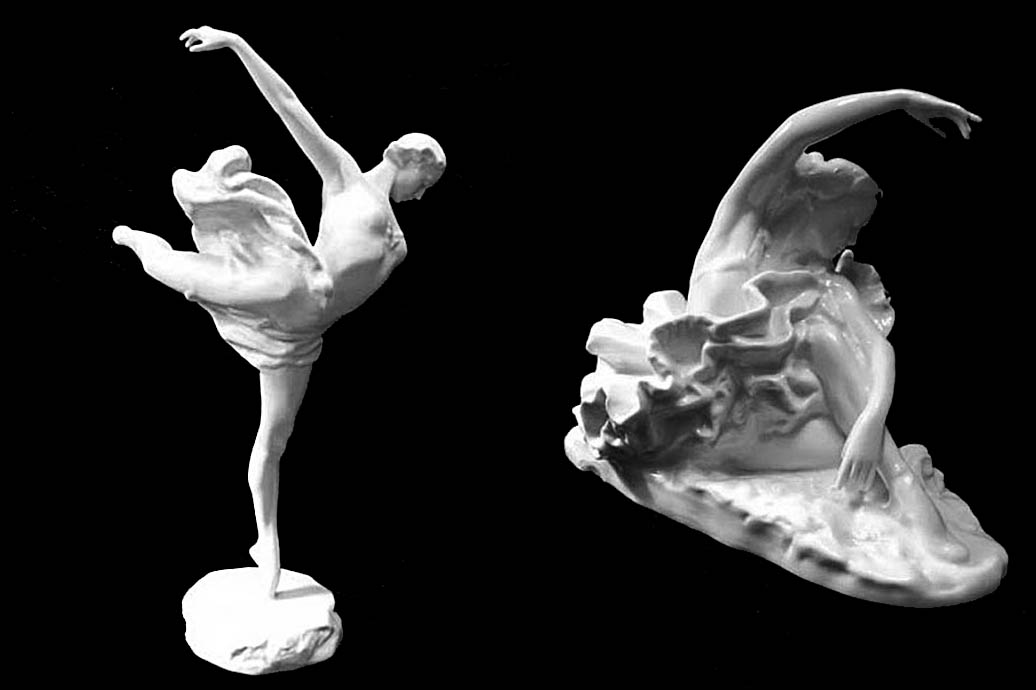 The versatility of Elena Alexandrovna Janson-Manizer's creative path is impressive. Elena participated in almost all exhibitions since 1926, including the all-Union one, dedicated to the fifteenth anniversary of the Workers' and Peasants' Red Army in 1933, performing a plaster composition "Shooting Club". She was the author of the sculptural group of Two Female Athletes. She took part in the design of the Dynamo metro station, created 24 stories for round porcelain reliefs dedicated to different types of physical education and sports. 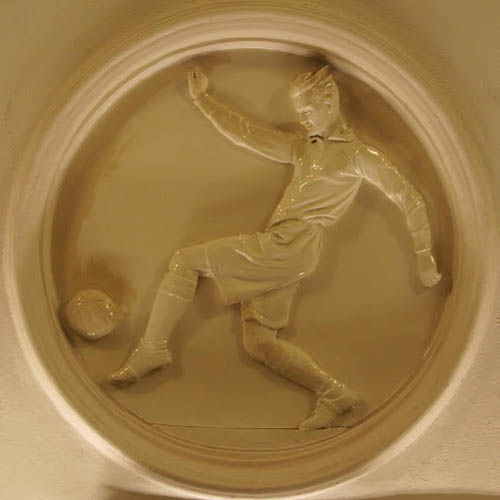 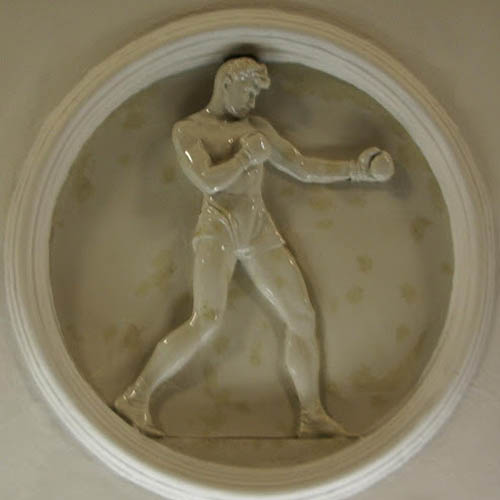 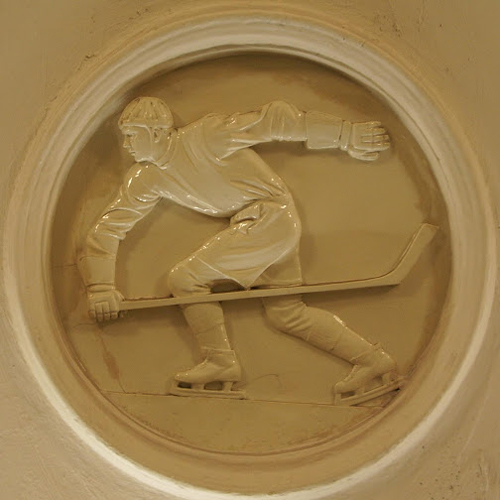 Bas-reliefs of the Dynamo metro station, E. A. Janson-Manizer.

She performed statues and sculptural portraits of M. G. Isakova, three-time world champion in speed skating, and A. V. Chudina, track and field athlete. In 1949, she created sixteen bas-reliefs on the topic of the multinational USSR and a relief portrait of I. V. Stalin, surrounded by banners at the Dobryninskaya metro station. She was the Member of the Artists' Union of the USSR. She was the Honored artist of the RSFSR from 1968. When creating sculptures on the topic of sports, artisans of the Lobortas House often choose incredibly complex angles and poses, by snatching certain instants of movement out and by solving complex compositional tasks at the same time. Plastic expressiveness of the sculpture conveys the beauty of movement, body and has a strong emotional impact. 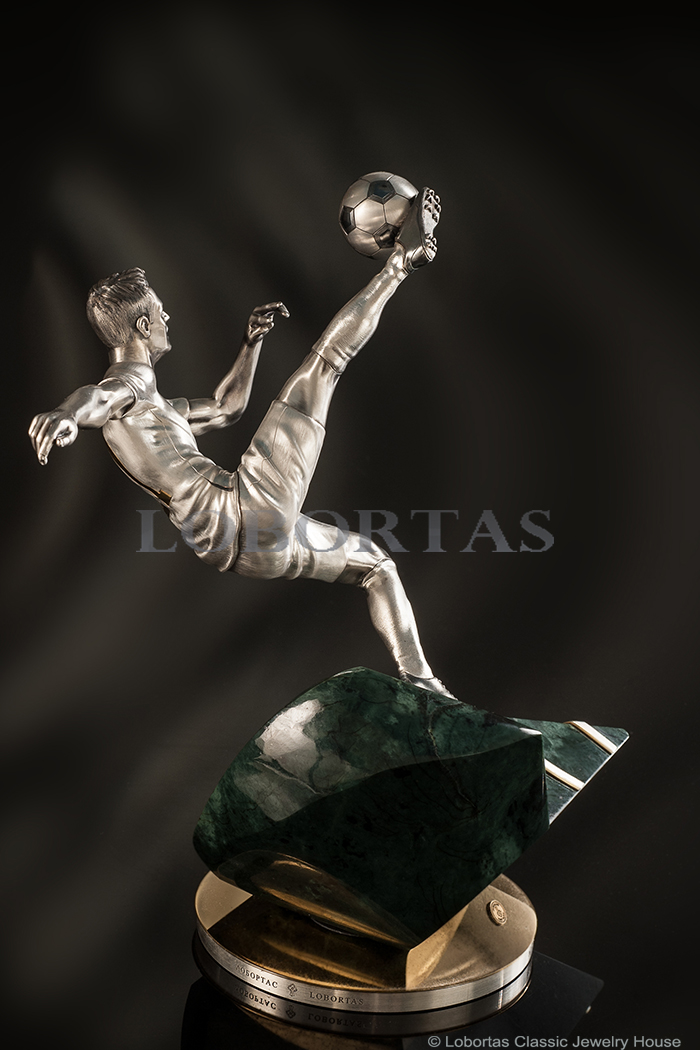 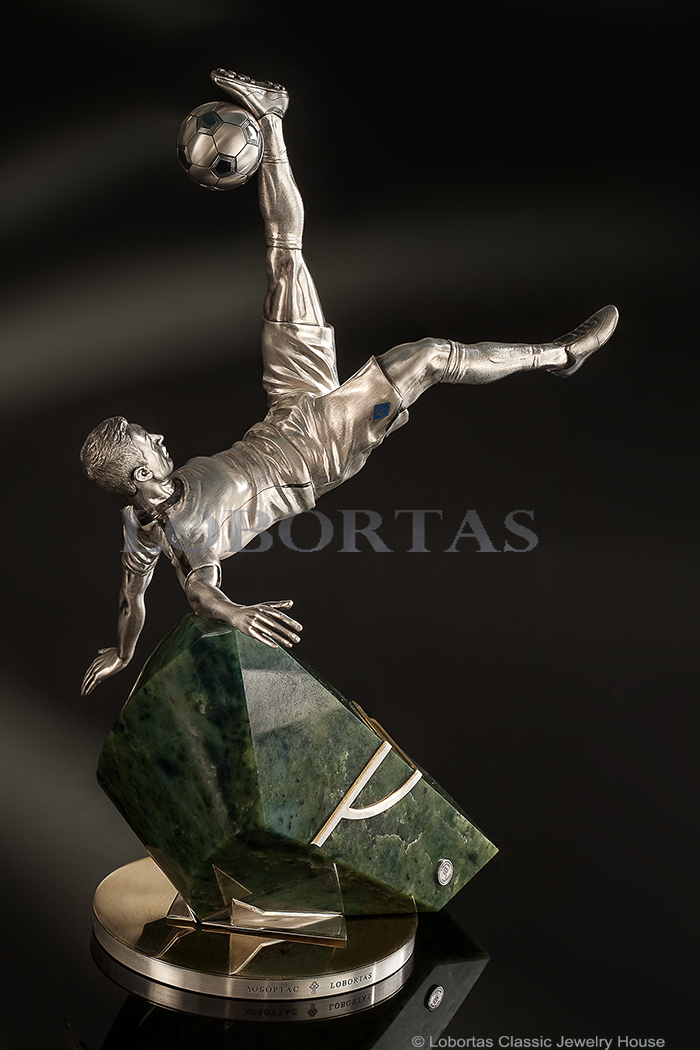 Football of the XXI Century. Precious sculpture. House of Lobortas