The expression of the progressive trends of Russian small-scale sculpture in the early 20th century is the art of Sergei Mikhailovich Volnukhin, Ilya Yakovlevich Ginzburg, Paolo Petrovich Troubetzkoy, Anna Semenovna Golubkina, Sergei Timofeevich Konenkov, Elena Alexandrovna Ianson-Manizer and few others. Along with the content renewal, the artistic language of sculpture changes as well. The importance of plastic and expressive form increases

Sergei Mikhailovich Volnukhin was born in Moscow, in a merchant family. The sculptor spent his almost entire creative life in Moscow, where he lived, worked and was associated with its main educational and artistic center, the Moscow School of Painting, Sculpture and Architecture (MSPSA), where he studied (1873-1886), and taught (1894-1918). An outstanding teacher, one of the founders of symbolism and modernism in Russian sculpture. 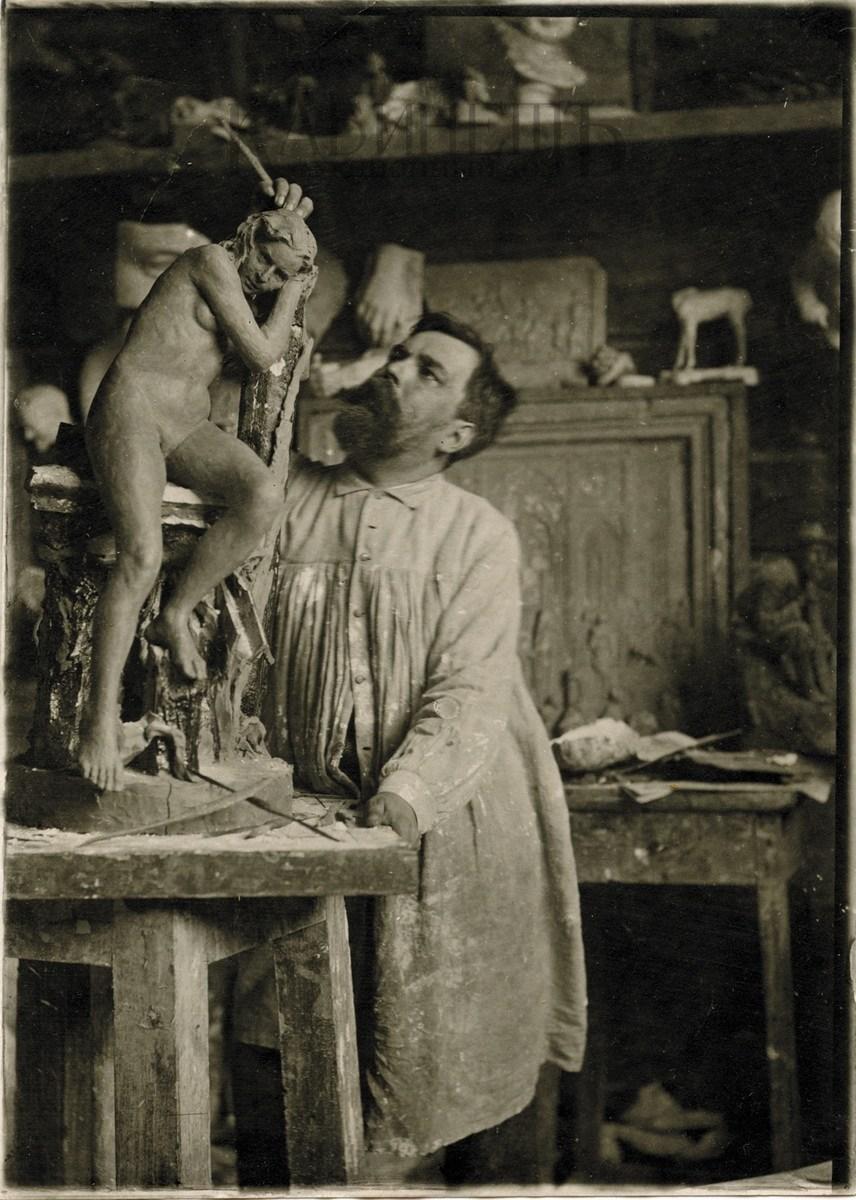 While combining teaching activities with an independent creative work in the field of sculpture, Sergei Mikhailovich made the scale models for the arts and crafts figurines, was engaged in decorative moldings to orders from Moscow architects for the factory of the Ovchinnikovs by making genre statuettes and allegorical compositions. Later, two main genre trends were determined in the sculptor's work: small domestic statuettes, often portrait busts. 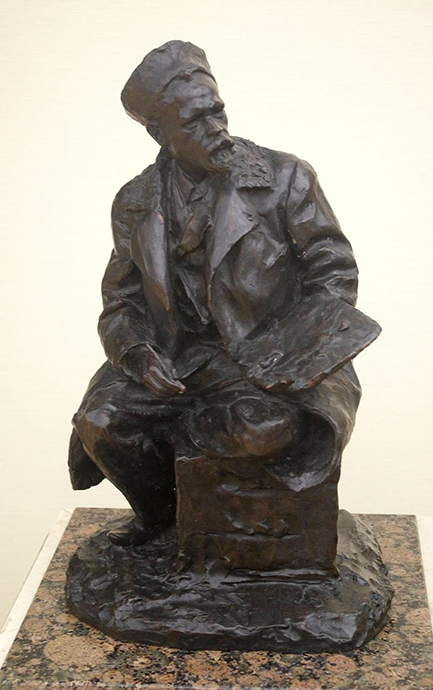 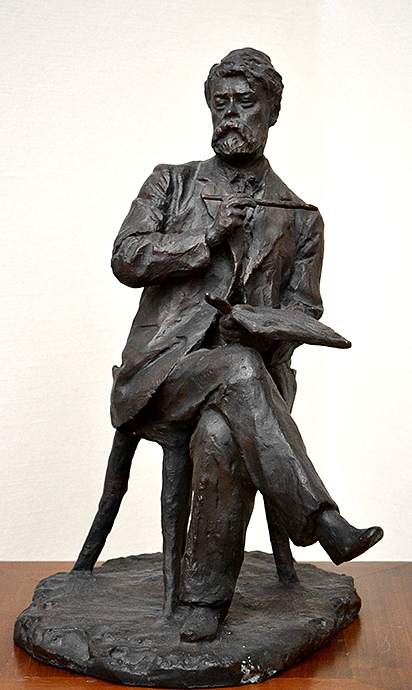 A portrait of P. M. Tretyakov (1899) is among the most famous busts. It was made shortly after the death of the famous gallery's founder. 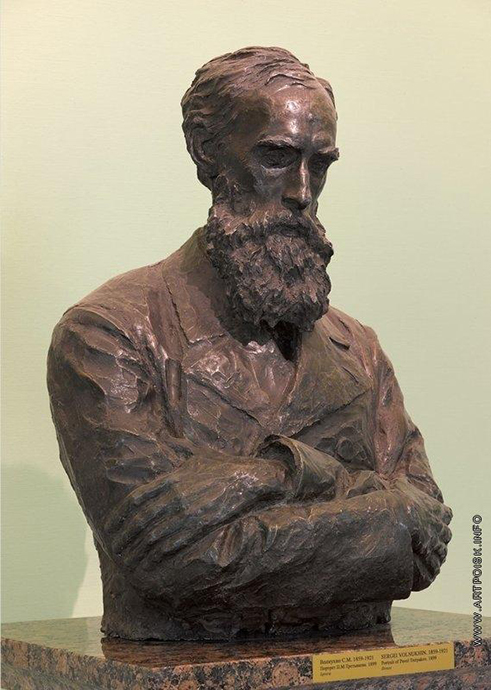 Yet when being a child, the future sculptor Ginzburg was carried away by carving various objects and figurines from a grinding stone while living in Vilna. M. M. Antokolsky, who came to Vilna in 1870, saw the boy’s first work and rated it high. From that time, the study of Ginzburg began with a famous sculptor, which then grew into creative cooperation and friendship that lasted until the death of Antokolsky in 1902. 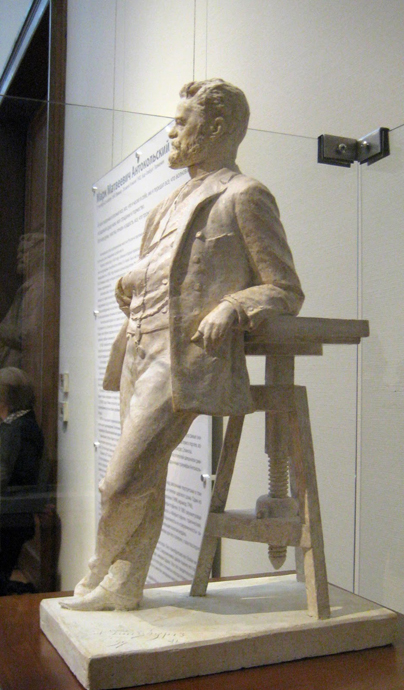 I. Ya. Ginzburg, The Portrait of M. M. Antokolsky.
State Tretyakov Gallery.

In 1878, Ginzburg was admitted to the Department of Sculpture of the St. Petersburg Academy of Arts. In 1886, for the program work — the bas-relief of Cry of Prophet Jeremiah on the Ruins of Jerusalem – he got a gold medal and the title of the 1st degree class artist. The sculptor worked mainly in the plastic art of small forms. 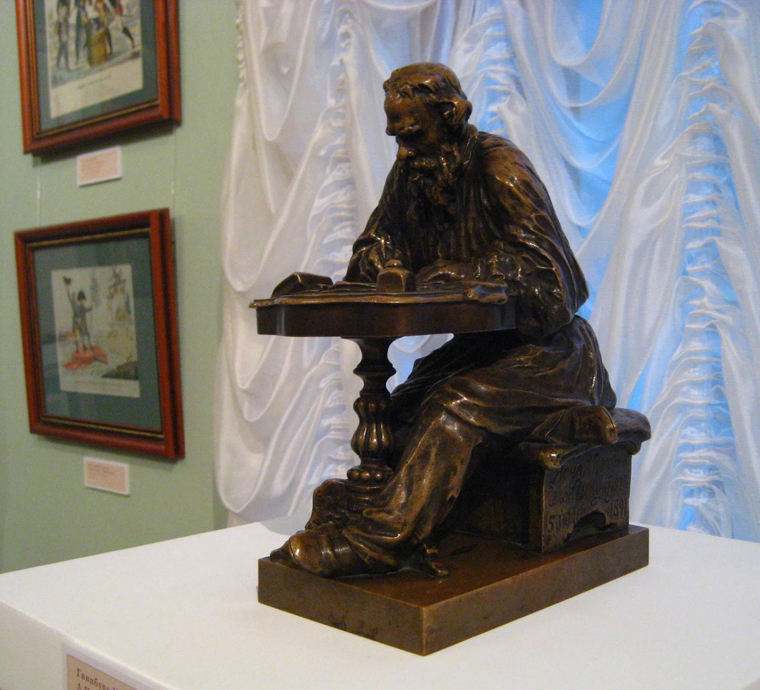 I. Ya. Ginzburg, Leo Tolstoy Working at the Round Table, 1891
The State Russian Museum, St. Petersburg.

Ginzburg developed a specific form of small plastic art. It was a special kind of portrait figurines depicting artisans and artists and reproducing their images in the state of everyday creative activity. These are statuettes of plaster and bronze showing the artists I. I. Shishkin, V. V. Vereshchagin (both – 1892), I. E. Repin (1897), V. I. Surikov (1914), writers L. N. Tolstoy (1891), M. Gorky (1894), composer and pianist A. G. Rubinstein (1898) and others. 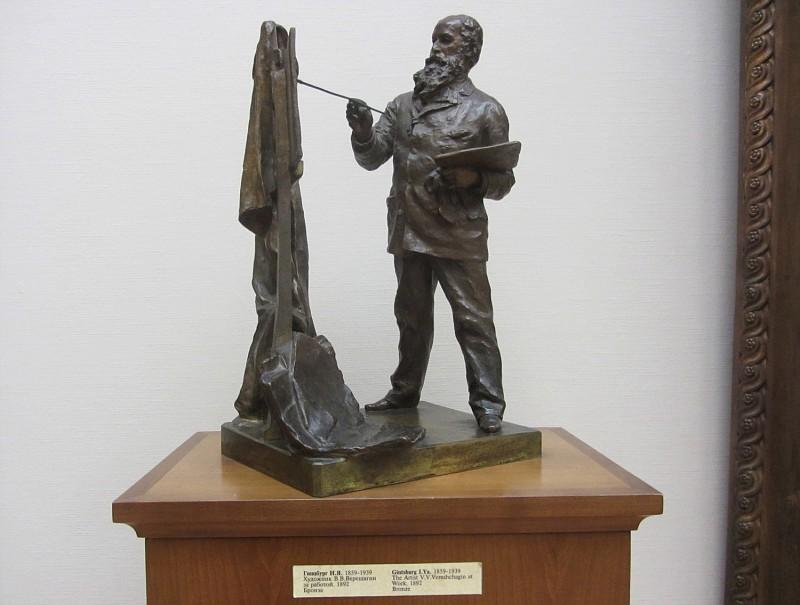 I. Ya. Ginzburg, The Artist V. V. Vereshchagin at Work, 1892
The State Russian Museum, St. Petersburg.

In general, the field of portrait art has become almost the main one in the sculptor's work. In addition to portrait statuettes, Ginzburg makes numerous busts of representatives of the artistic intelligentsia – I. N. Kramskoy (1886, plaster cast; 1887, bronze), D. V. Grigorovich (1884), V. S. Solovyova (1900). He was engaged in teaching activities: in 1918, he was elected to the post of Lead Professor of the Sculpture Workshop of the Petrograd Free State Art Studios; in 1921-1923, he was a dean of the sculpture faculty of Vkhutemas (Higher Art and Technical Studios). 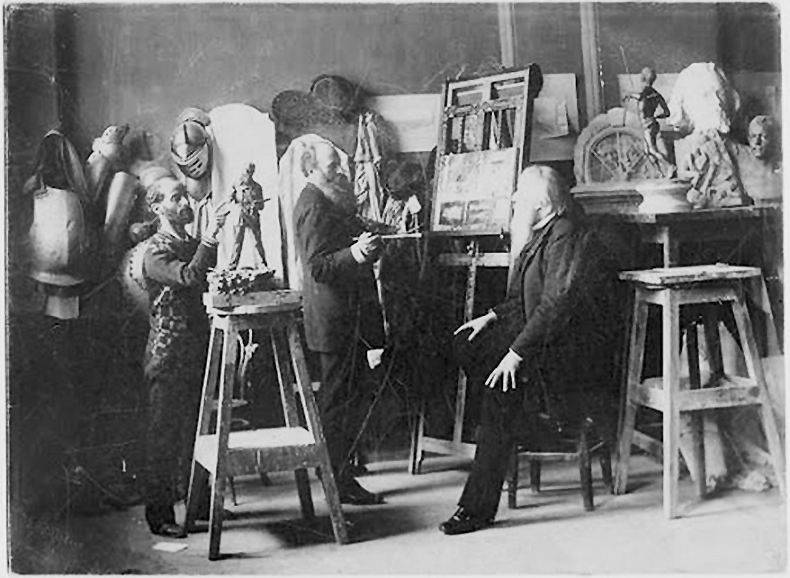 V. V. Vereshchagin and V. V. Stasov in the workshop of the sculptor I. Ya. Ginzburg
The photo by A. Nasvetevich. 1892/Photo: Courtesy of M. Zolotarev

Paolo Petrovich Troubetzkoy (1866—1938), the son of Russian Prince and American woman, was born, raised, educated and started his creative life in Italy. In Russia, he worked intermittently between 1898 and 1906. By 1898, he managed to create a number of unconditional masterpieces, participated in many international exhibitions and was already a mature artisan. 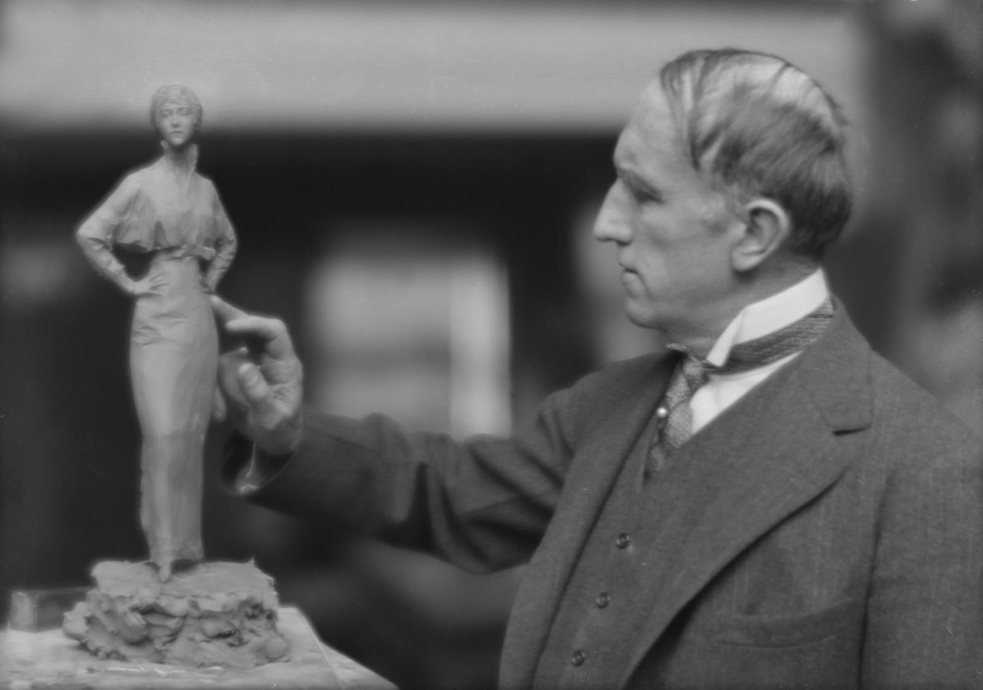 Twice (in 1906-1914 and in 1921-1932) his workshop was located near Paris; in 1914-1921 he lived and worked in Hollywood, where he bought a small house and built a spacious studio. In 1932, Troubetzkoy returned to Italy and ended his life in the town of Pallanza on the shore of Lago Maggiore. Everywhere, he felt at home and worked with full creative energy. 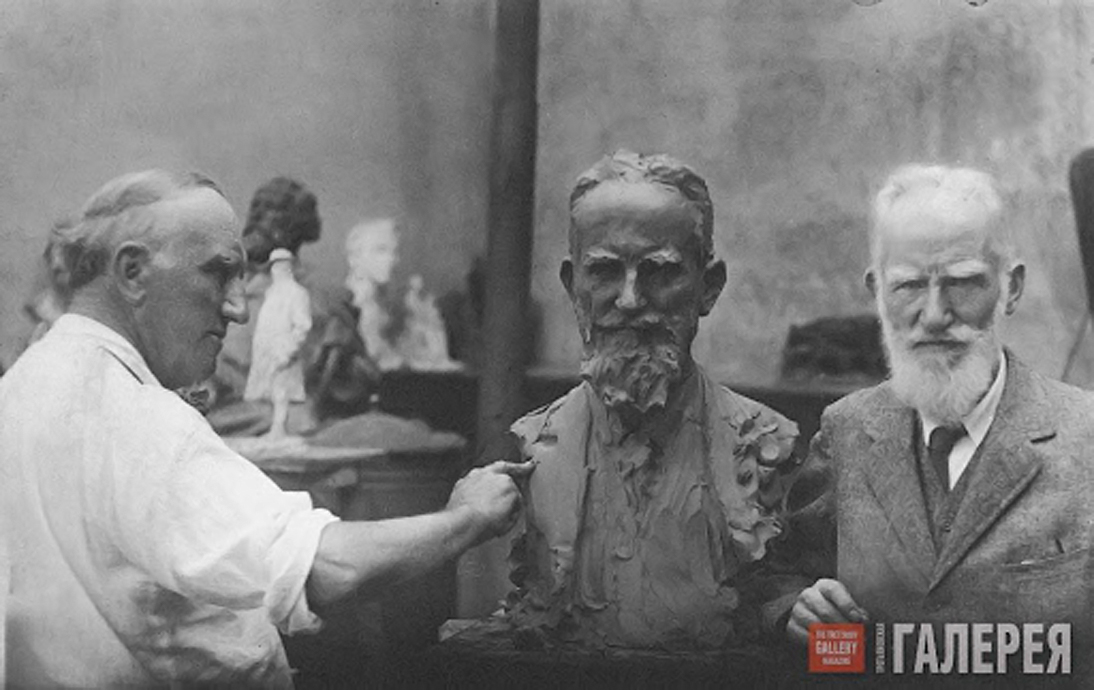 Paolo Troubetzkoy belonged to the happy type of artists, who come to the world with the already established specificity and their unique face. They are not destined to come from anyone and, as the sculptor himself said, "to leave no offspring in art", they just need to be born on time. 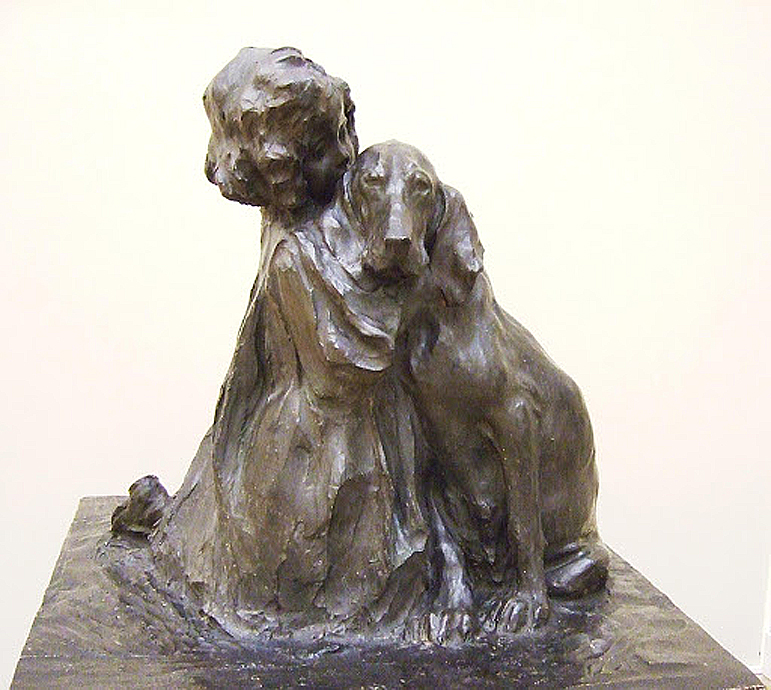 He had a huge success, got the glory of the innovator and even in some way the halo of the head of the new Moscow school, although the main burden in the revival of Russian sculpture lays on the shoulders of other people. 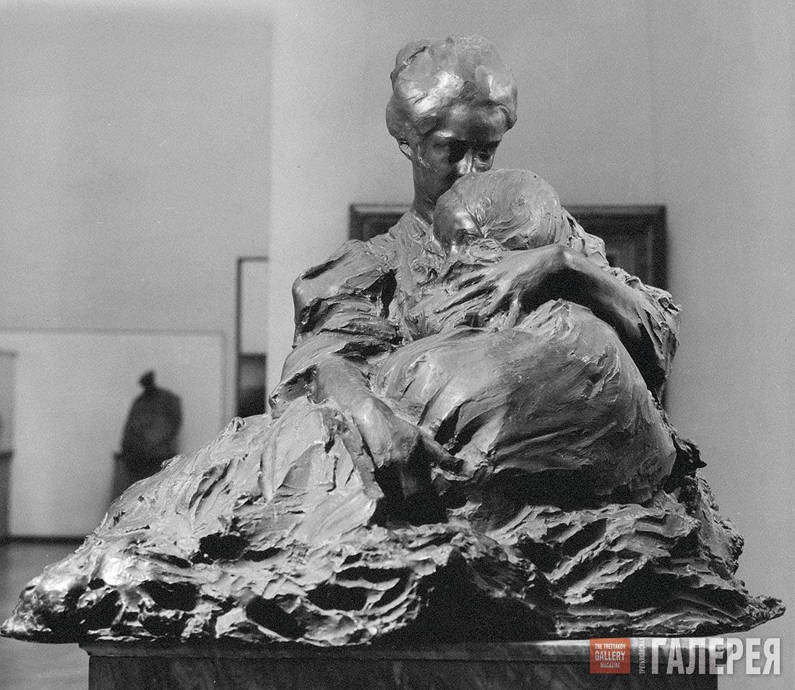 Troubetzkoy did not receive a systematic art education, but the aesthetic views of his contemporaries were familiar to him from his childhood and were close to the nature of his talent. Paolo Petrovich quickly managed to develop his own plastic style, his handwriting in the sculpture, which, despite the large number of imitators, no one was able to repeat in full. 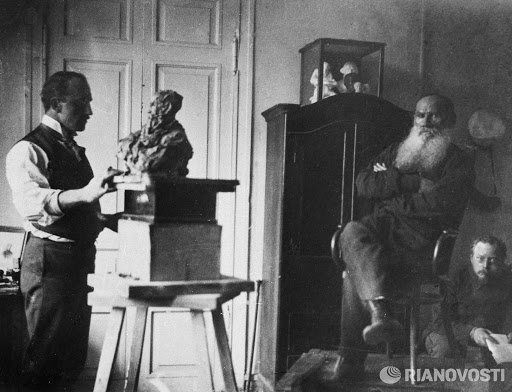 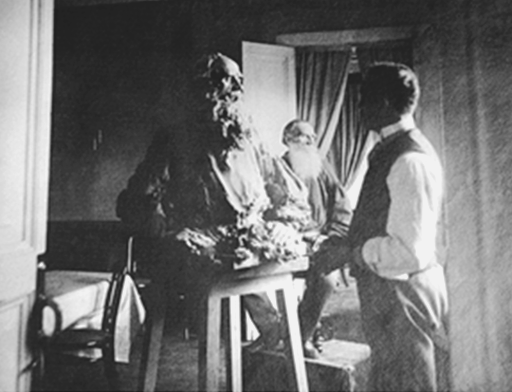 It is not known whether the sculptor was happy or upset by the fact that since 1900, when he exhibited his works in the Russian Department of the Exposition Universelle in Paris and initiated, as Auguste Rodin put it, the "Russian Triumph" in the world, his name became associated with the Russian school of sculpture. 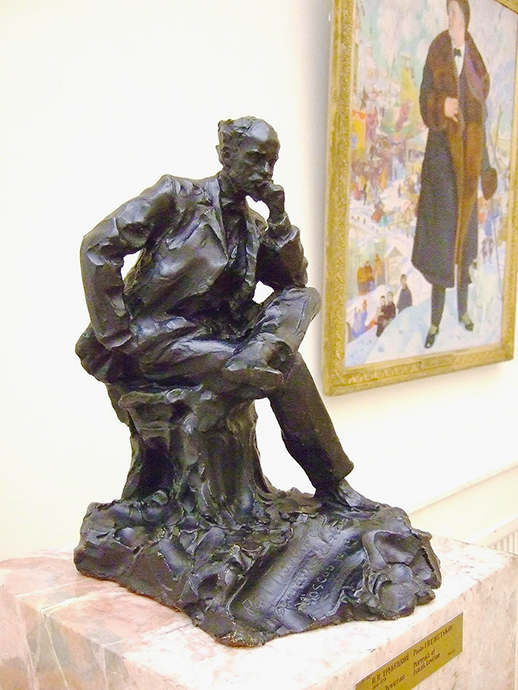 Unsurpassed works by Troubetzkoy and a halo around his personality in Russia are largely due to the fact, when he barely managed to scatter across the Russian exhibitions as a firework, he disappeared from the artistic horizon as rapidly as he arose. The appearance of Troubetzkoy in Russia at the turn of XIX-XX centuries was an important event for Russian sculpture. Oddly enough, that his levity would help to finally disavow the impotence of obsolete academic shape and to get rid of regard for it. 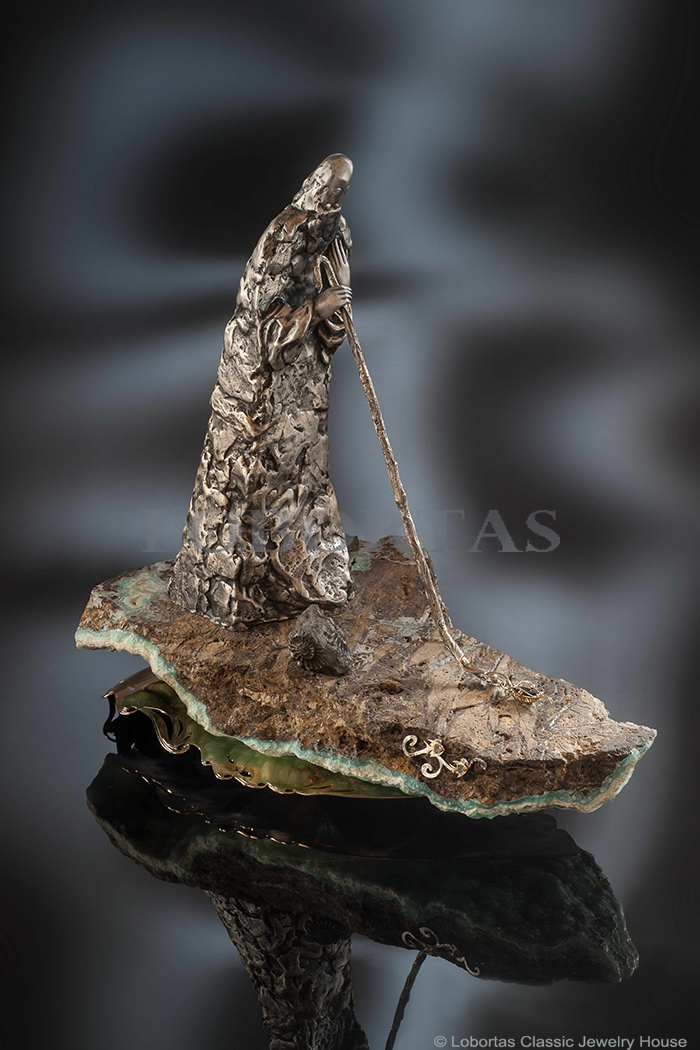 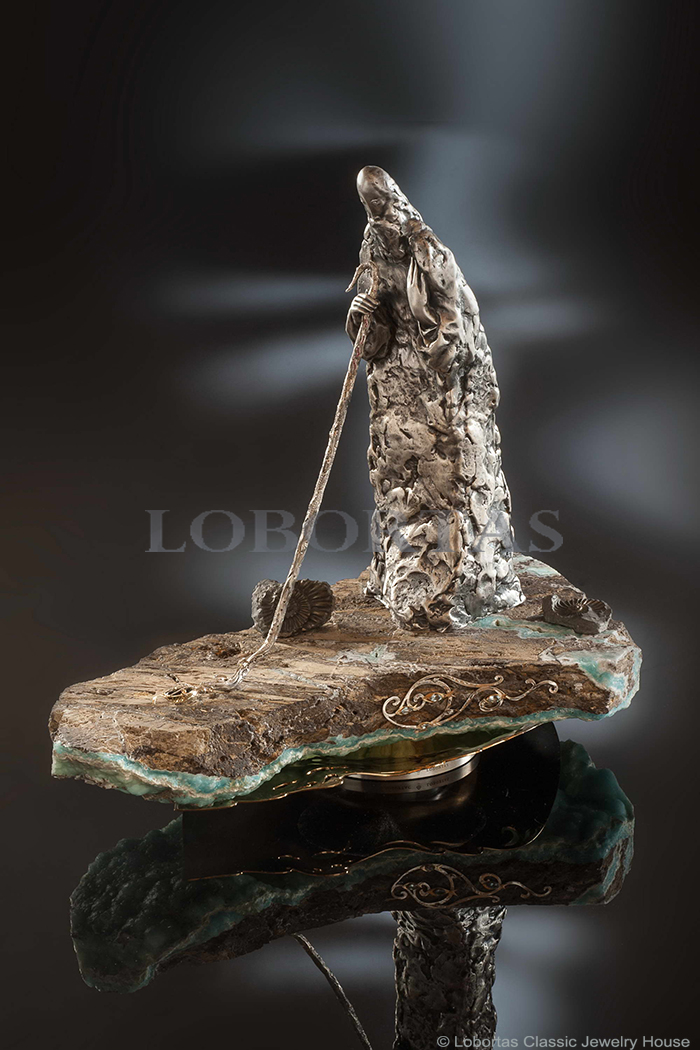