Sculptor Vasily Yakovlevich Grachev is considered one of the 19th century's best artisans of small plastics. The main theme of the works are genre scenes depicting people, horses, episodes of historical and military themes. Grachev's works are characterized by vitality, realistic interpretation of the plot, careful study of details and textured surfaces, as well as masterful transmission of motion dynamics and expressive elaboration of details, especially the small ones.

Since the 1830s, in Russia, the so-called "cabinet sculpture", which represented small objects for decorating private offices, started to gain popularity. It could be writing utensils of bronze, frames for miniatures, bells, figures or other things purchased for a practical use. Often the bronze was used not as the main material, but as a frame for numerous cabinet objects made of wood, marble and other materials. Grachev was one of the prominent representatives of the objet d'art genre in Russia. 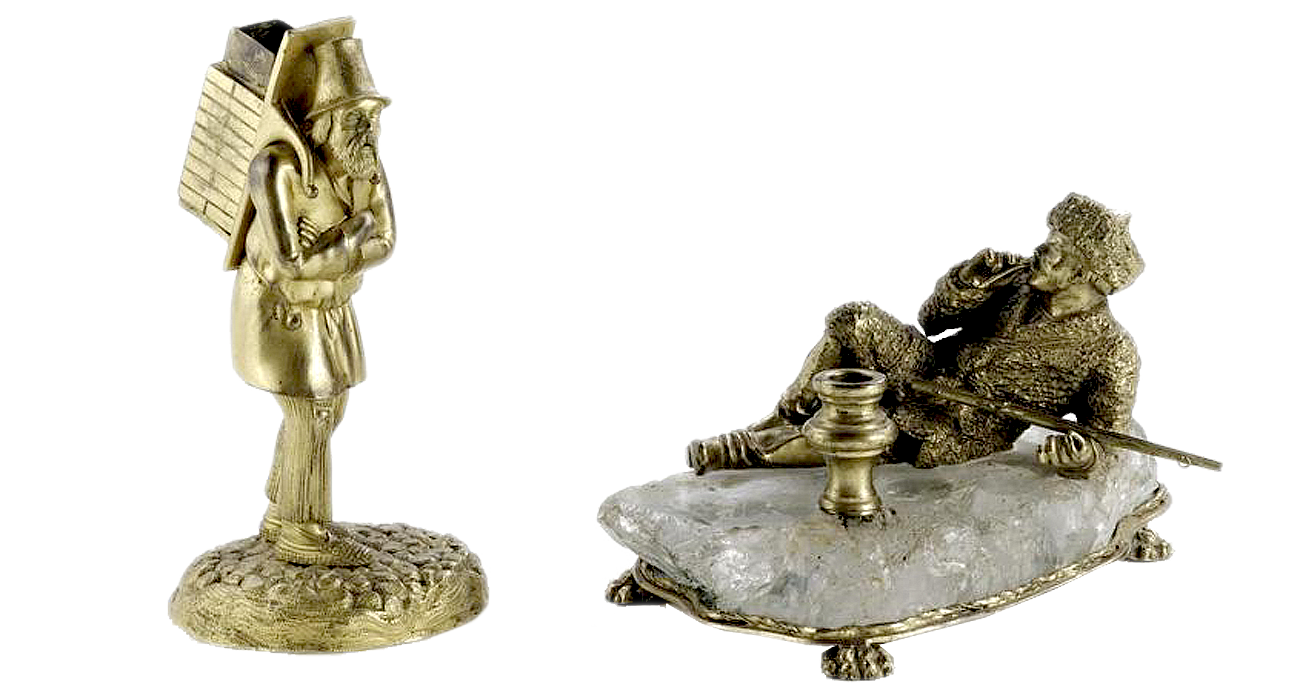 Animals are very common as the characters of the 19th century's sculptures, among which a horse was a favorite one. In the works by Grachev, it is present especially often, being a silent witness to numerous scenes. Horses in his sculptural compositions are depicted with amazing accuracy. Even in such inanimate material as bronze, the author manages to convey the play of every muscle, every movement of this beautiful and noble animal. Here the horse quickly rushes, straining all its forces, in the composition of Galloping Cherkessians, here it is startled by a sound and takes a wait in the sculpture of The Horse At Waterhole, but dutifully waits until the master says goodbye to the beloved one in the Cossack Lovers Bidding Farewell. In the works with several characters sculptor necessarily demonstrates their emotions, interest in each other. 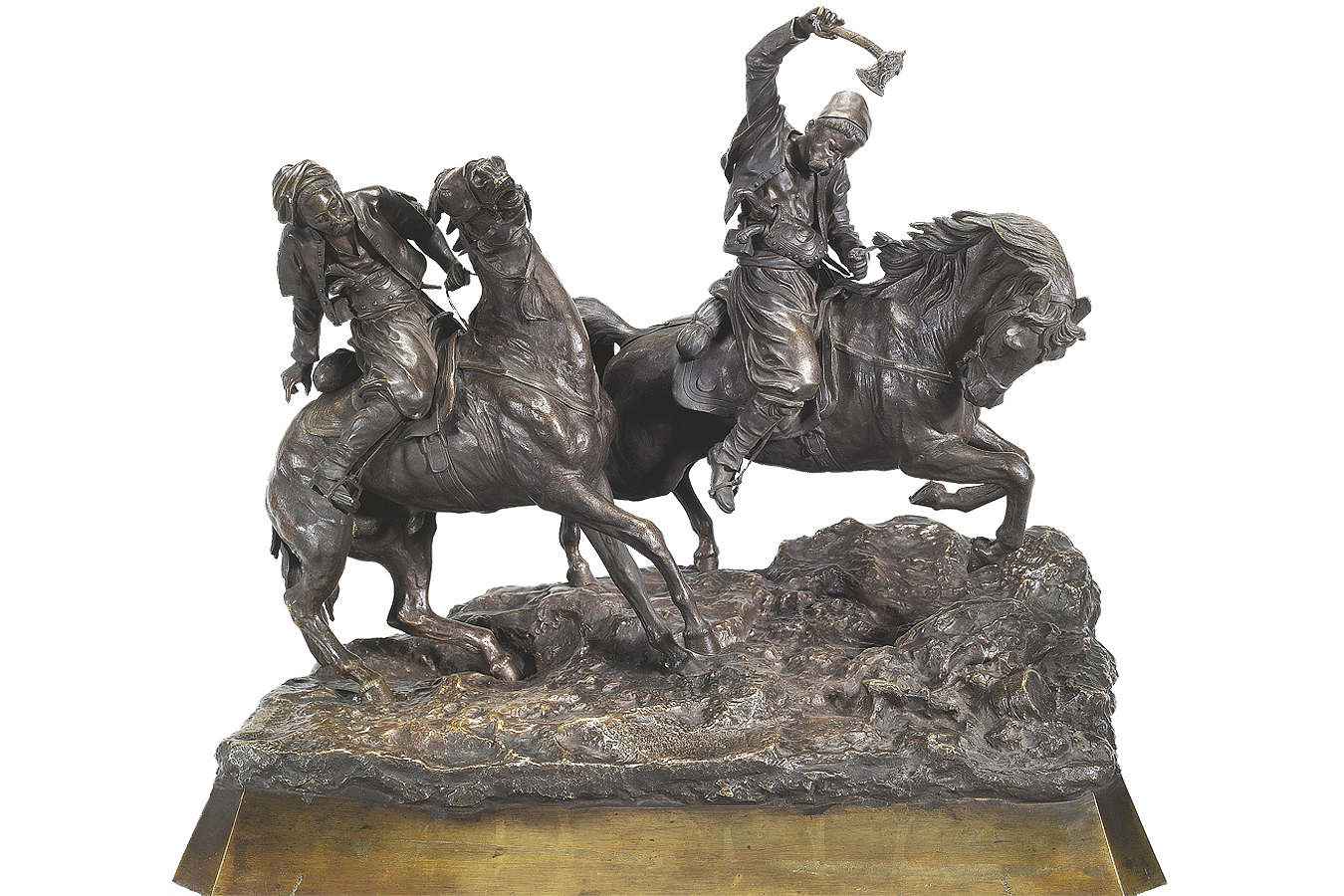 There is a version that the sculptor Lanceray concluded with Grachev a tacit agreement that the latter will interpret his works in his own way. This explains the significant similarity of a number of their compositions, in which Grachev changes individual details, such as clothing. It is interesting that Grachev does not just copy the works by Lanceray, but transfers them to a new timeline. Therefore, the work of Zaporozhets After A Battle, made by Lanceray, turns into Don Cossack by Grachev. 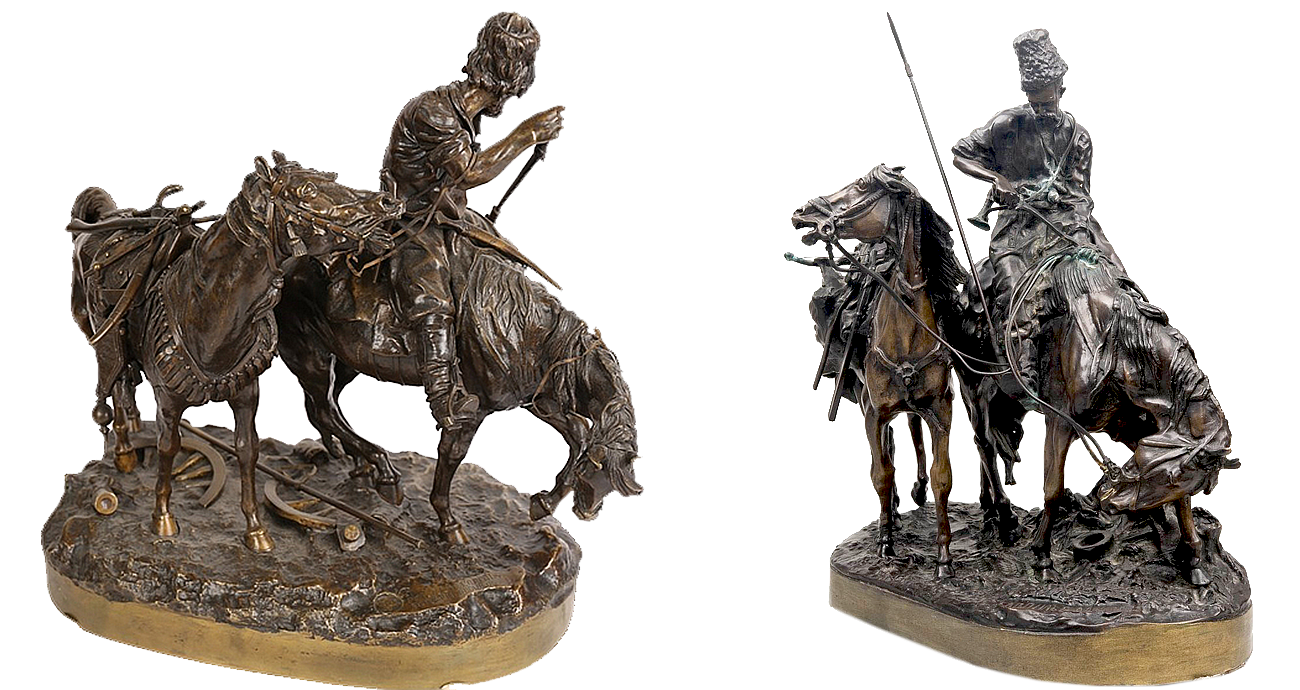 If you compare both works, you can find their significant similarity. Lanceray presented Zaporozhets, taking his trophy – a gentry horse – having shown the warrior's condition as well. Cossack looks tired and after a bloody battle habitually wipes his sword on the mane of his gallant horse. Grachev has fully preserved the intent of the author, having left the former location of the figures, their postures, clothing, and ammunition. However, in fact Grachev made the transfer of the character to another time, because of what he had to change the details of the figure group as well. In the hunting theme, the author invariably follows his tradition of detailing the plot as much as possible, which made the sculpture very interesting for the viewer. 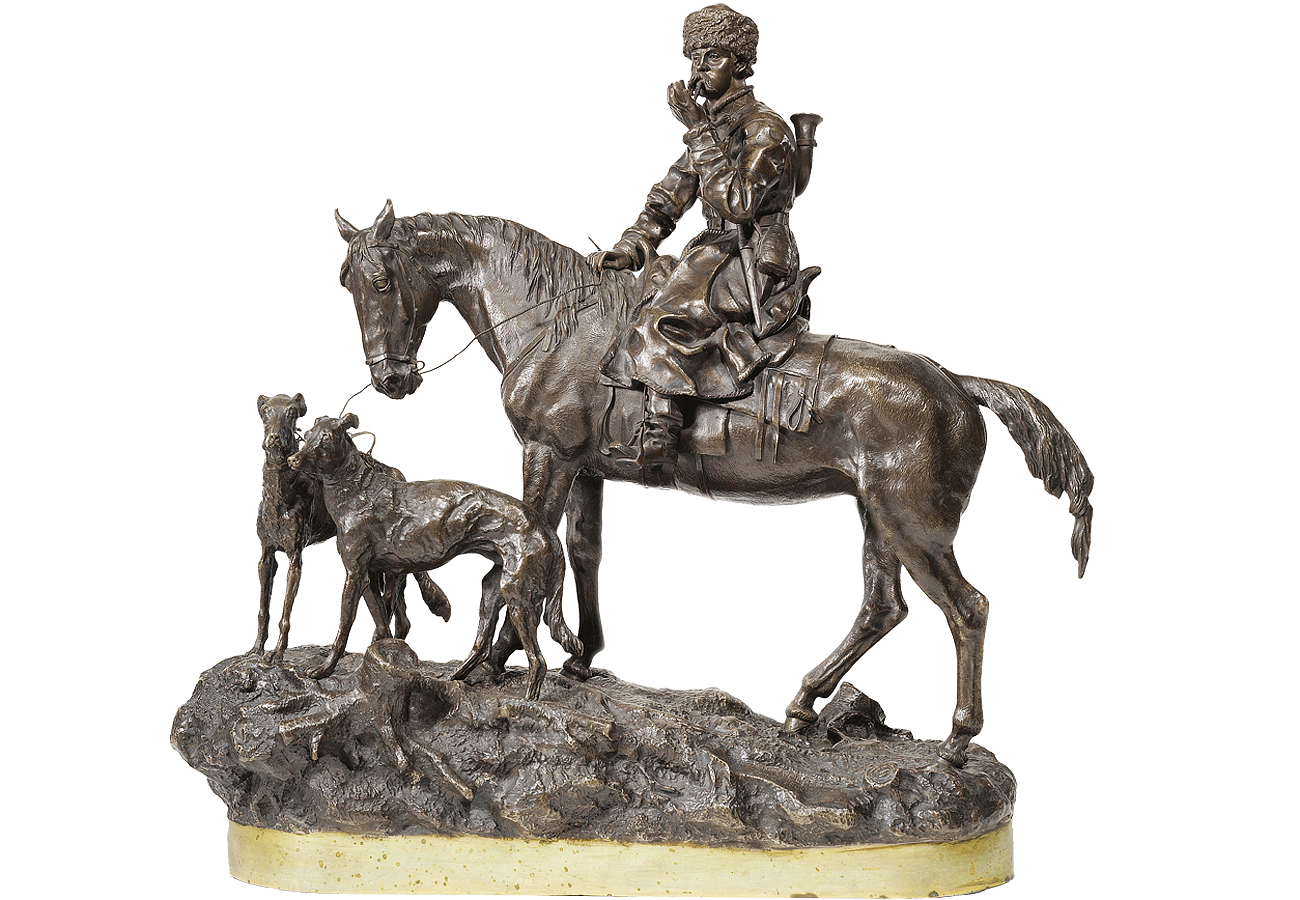 In historical themes, Grachev resorts to the subject of rulers in his works, without depriving such sculptures of numerous details of royal attributes. For example, he created a series called "Royal Hunt", consisting of a number of figures. Grachev created an equestrian figure of Ivan the Terrible based on one scene of the A. K. Tolstoy's Prince Silver, in which the falconers report to the Tsar of his falcon to have flown away. 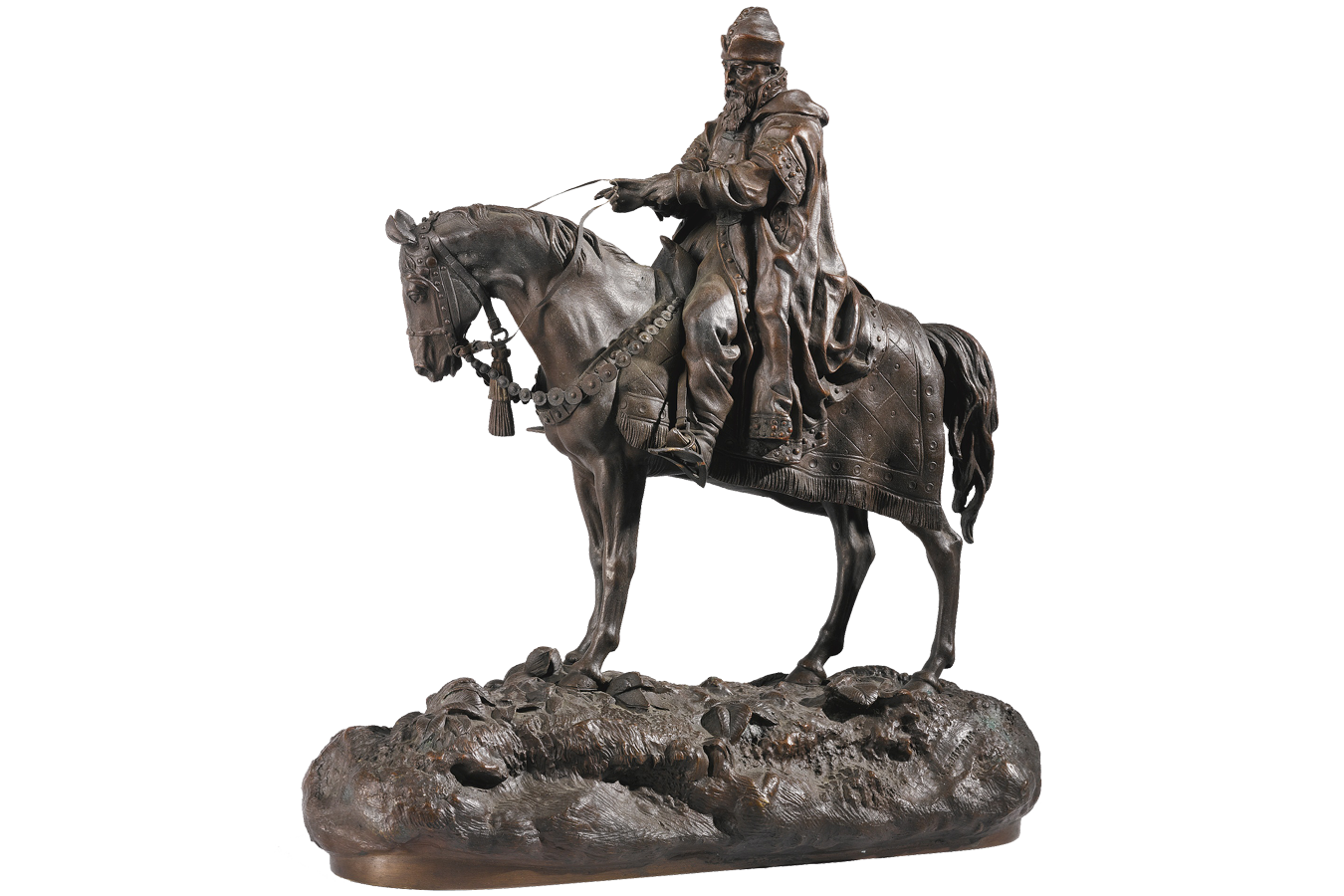 In the works by Grachev, the interaction between several characters, which with incredible accuracy conveys their relationship and describes the time of the event in detail, can be often observed. For example, in the work of Young Lovers, a man and a woman, who met on a date, appear before us. At the same time, the woman in this work is a symbol of femininity, care, tenderness. This is expressed in her appearance (long braid, elegant dress, jewelry) and in a gentle touch to someone whom she likes. The man enchantedly hears her words, her caresses. 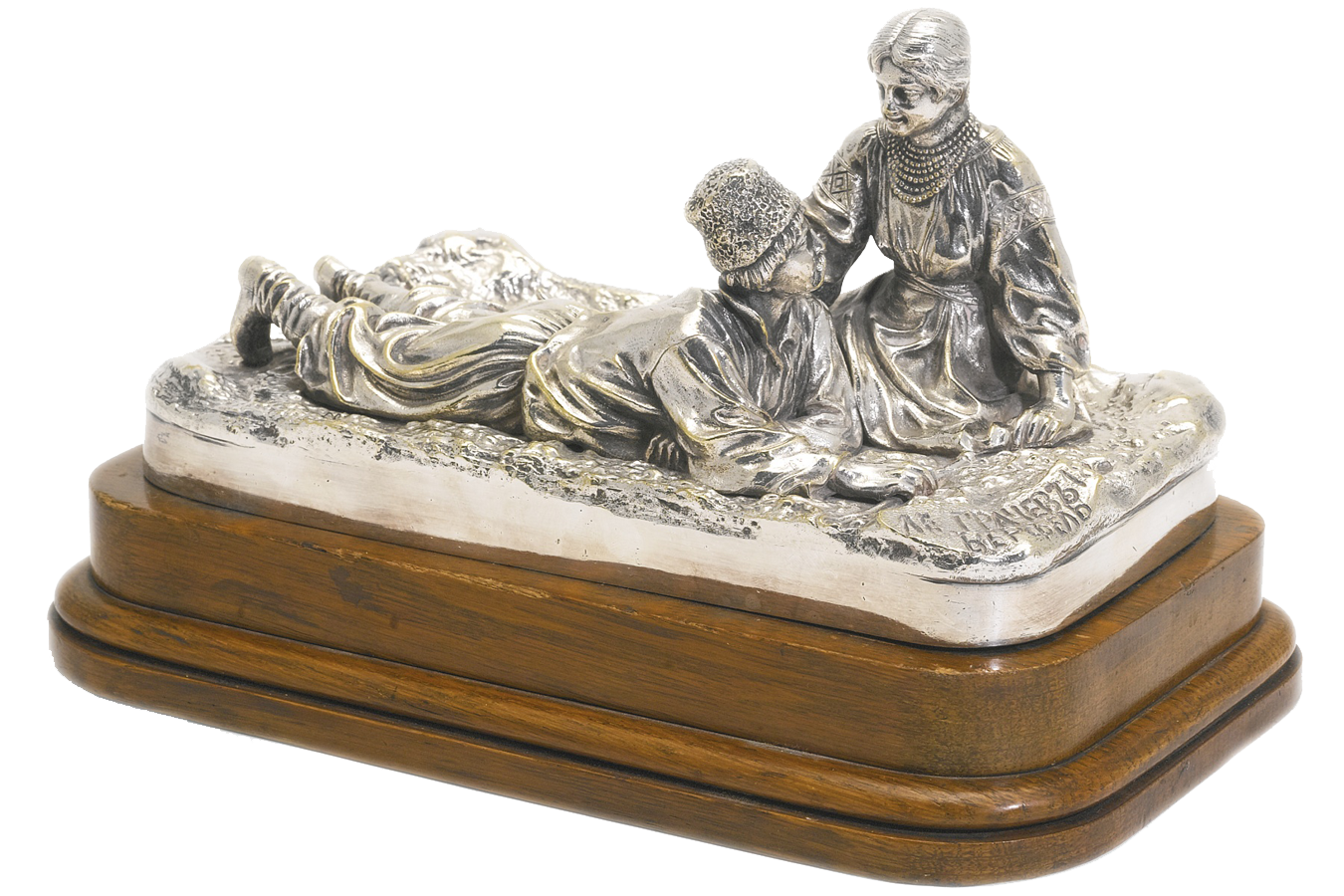 Evgeny Alexandrovich Lanceray is considered the founder of the Russian cabinet sculpture, through which the Russian school of plastic art became known around the world. His trips to Russia, travel to England, France, Austria, Belgium, Algeria and many other countries played a great role in the formation of the famous sculptor. Lanceray studied the works of famous French and Russian sculptors, visited museums, galleries and watched a lot. His love for sculpture began with childhood resentment. Being a boy, Lanceray loved to study the life of animals and made their sketches for a long time. Nevertheless, when he came to the smithy and asked the blacksmith to forge him a painted horse made of metal, that person invariably refused. 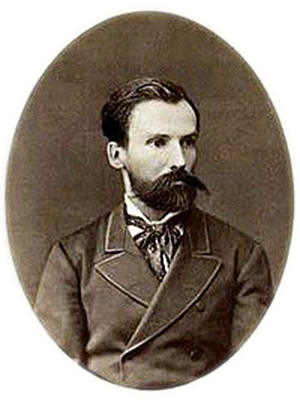 Then the father advised his son to sculpt the moulds of horses out of wax. Although Eugène Lanceray did not have a special education, he intuitively sensed the shape of objects and knew how to convey it in his works with incredible accuracy. Interestingly, Aivazovsky and Klodt, who immediately spotted a talented sculptor in the young Lanceray, asked his father not to give the child to the academy of arts, lest the nugget should be spoiled by classical stereotypes. 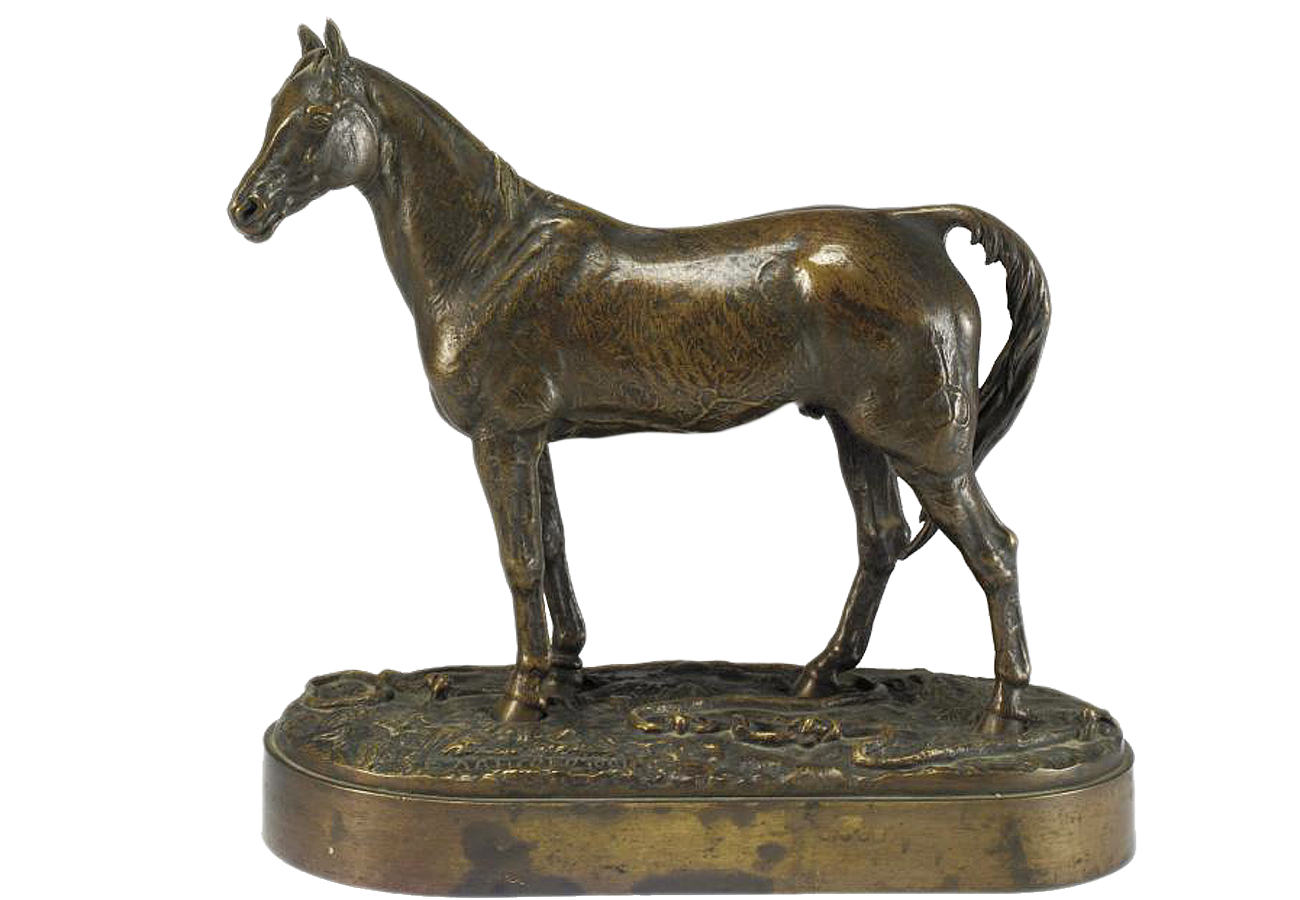 Later, the passion for animals resulted in numerous bronze works, which glorified the sculptor all over the world. Lanceray's interest in horses was so great that he created many compositions with the presence of this noble animal and became famous as a large animal sculptor. By working on the next figure group, the sculptor did not create any "mediocre" horse. He carefully drew not only the animal itself, but also picked up the rock that corresponds to the rider. So his warrior sat astride the Arabian horse, Englishwoman was astraddle the field hunter (English half-blooded breed), and for Cossack, indeed, he necessarily matched a steppe horse up. 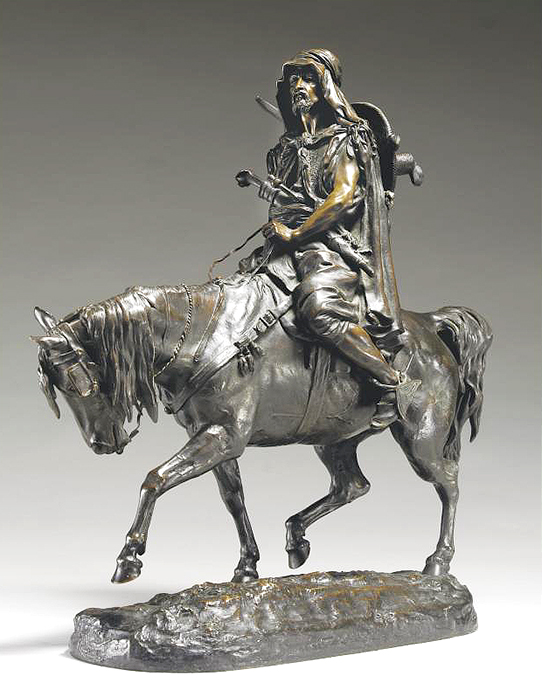 In particular, the work of Arab Warrior attended the exhibitions in Paris and the most significant art displays in St. Petersburg, where it gained a considerable success. The popularity of Lanceray's works is largely due to his identity. He did not tolerate templates and stencils, and preferred the truth of the composition to imitation of other people's works. In the small sculpture of The Capture Of The Wild Horse, the author managed to show all the tension that reigns in this scene. Lanceray was able to accurately convey the state of both horses, one of which is submissive under the master, and the second one was desperately fighting, trying to break free from the neck loop. The torque voltage was transmitted with the help of the smallest details – fear in the eyes of the animal, the posture of the rider, drawing every muscle in the bodies of animals. Nothing escaped the eyes of an experienced artisan. 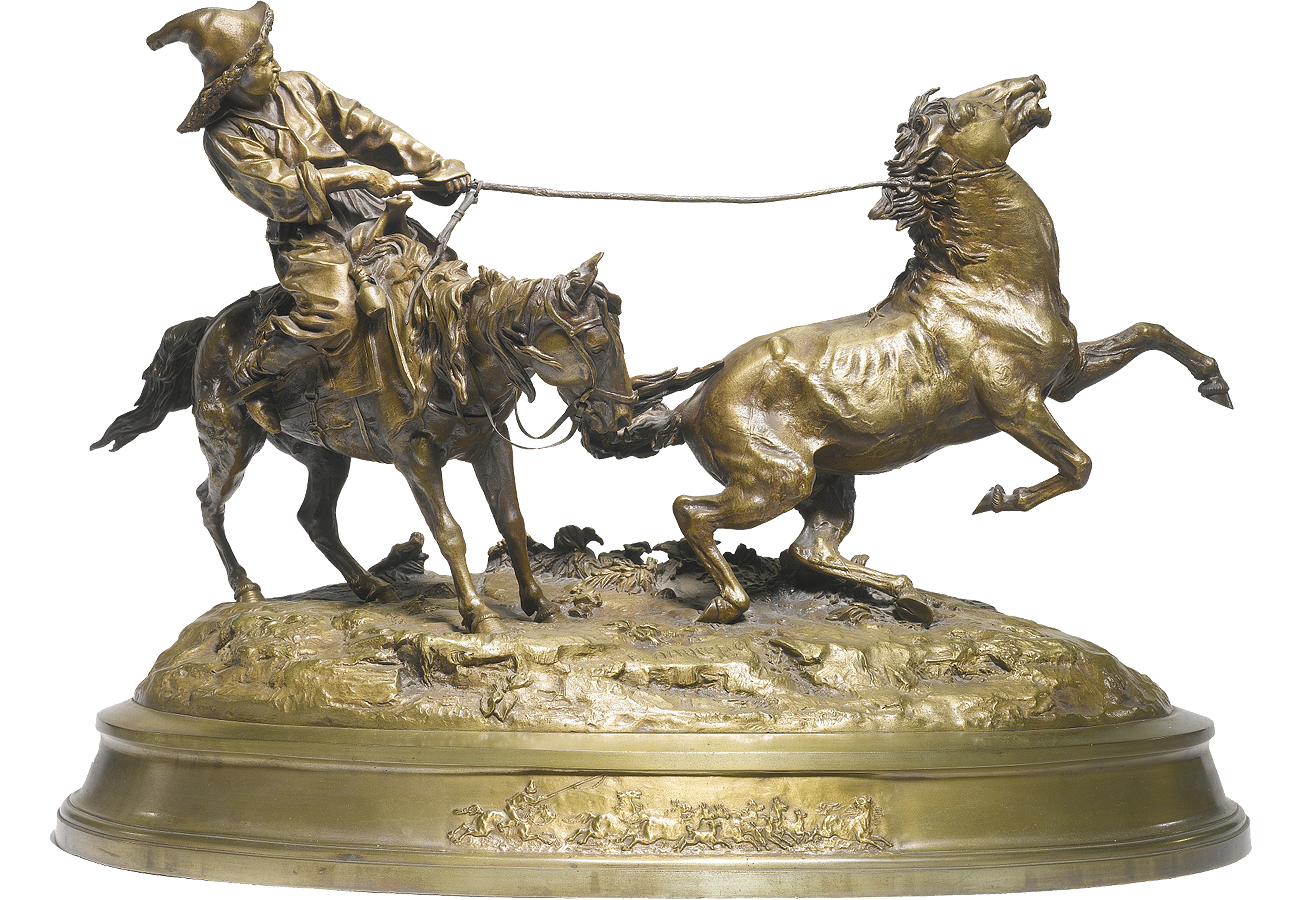 One of the best works of Lanceray is the sculpture of Prince Svyatoslav. He portrayed commander exactly as historians describe him – with a broad chest, strong neck, a tuft of hair on the bare head, which signed of his origin. Grand Duke of Kiev is depicted as militant and self-disciplined, ready to fight with his enemies to his last. Prince Svyatoslav appears before the audience at the moment when he sends his army to fight. According to the descriptions of the Primary Chronicle, Svyatoslav was a brave warrior, fast, like a leopard; in the campaigns, he was unpretentious, did not take any carts, ate simple food, slept without a tent. So he was captured by Lanceray in his characteristic manner of detailing the sculpture. He matched to a strong commander, resolutely leading his soldiers into battle, the horse, a powerful animal, ready to fight together with his master in the heat of battle. 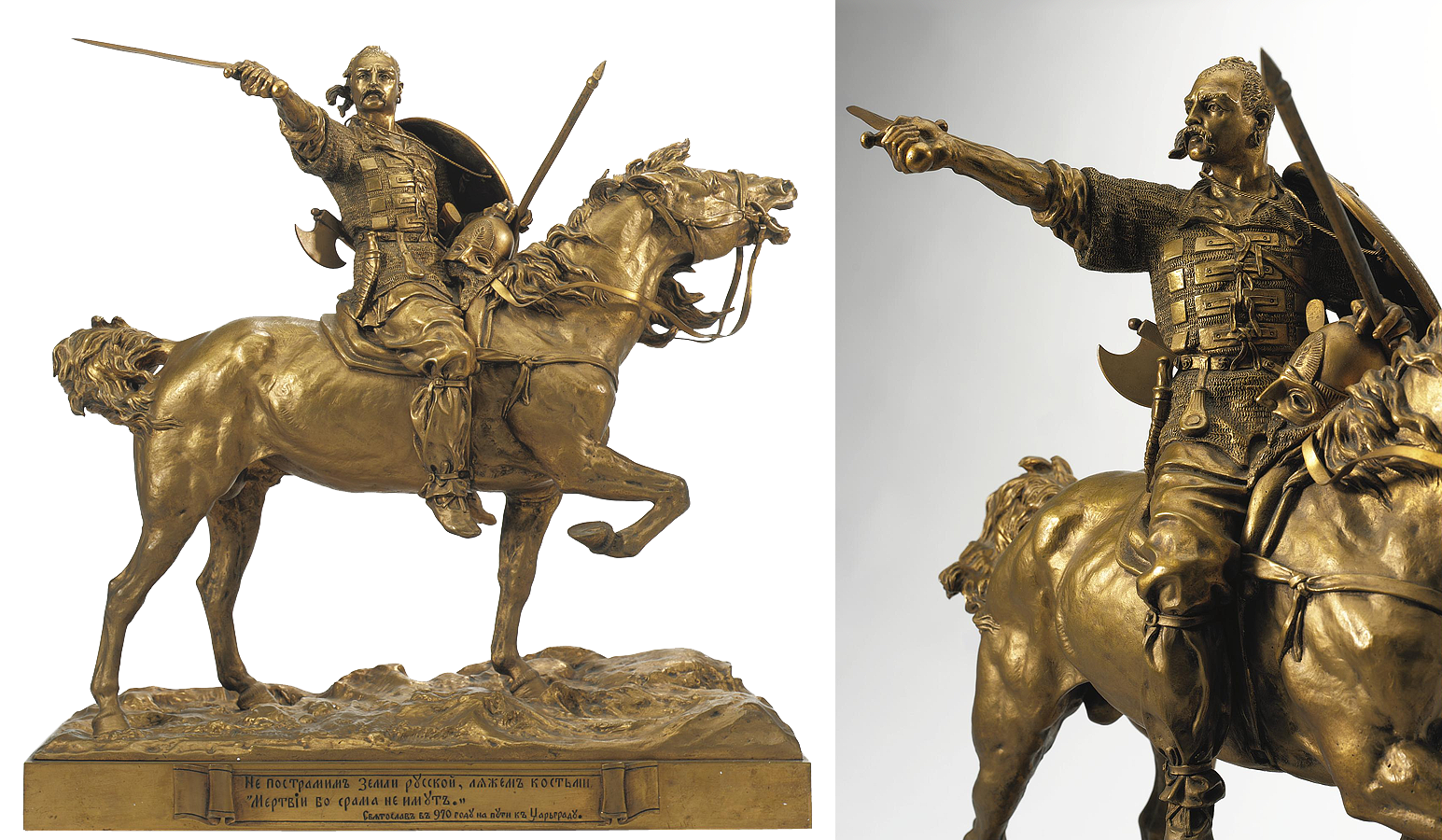 The work of Svyatoslav on the Way to Tsargrad is a kind of testament of the greatest sculptor to the world of art, his last work, which he had managed to perform before he died in the spring of 1886. Young and full of energy Lanceray created in his short life as much as many can not in 70-80 years of their lives. In total for the creative activity, the sculptor has created about four hundred works, the majority of which were private orders. That is why sculptural masterpieces exist in a single copy. Most of them are kept in the Russian Museum, the State Tretyakov Gallery and some other museums. Increasingly, the stone came into common use of the small plastic part. Work in stone developed in two main directions, on the way of generalization of the form, emphasizing the monolithic block and increasing the volume. 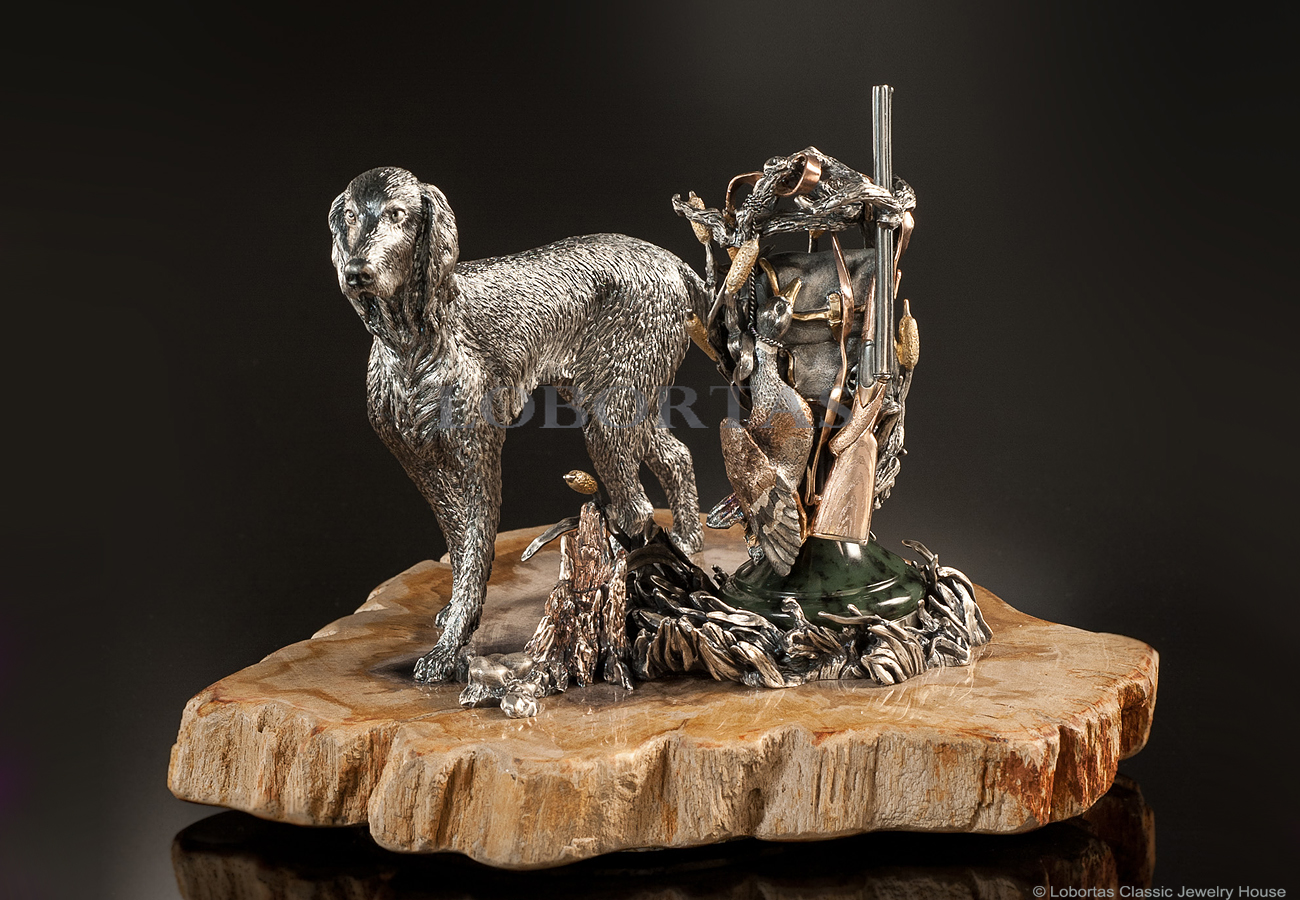 The same animalistic or genre sculptures, mounted on bearings made of marble, jasper, jade, lapis lazuli, agate, onyx or other stones, turned out to be more popular than simple bronze. The same thing was applied to the cabinet sculpture where the bronze was combined with semi-precious stones. 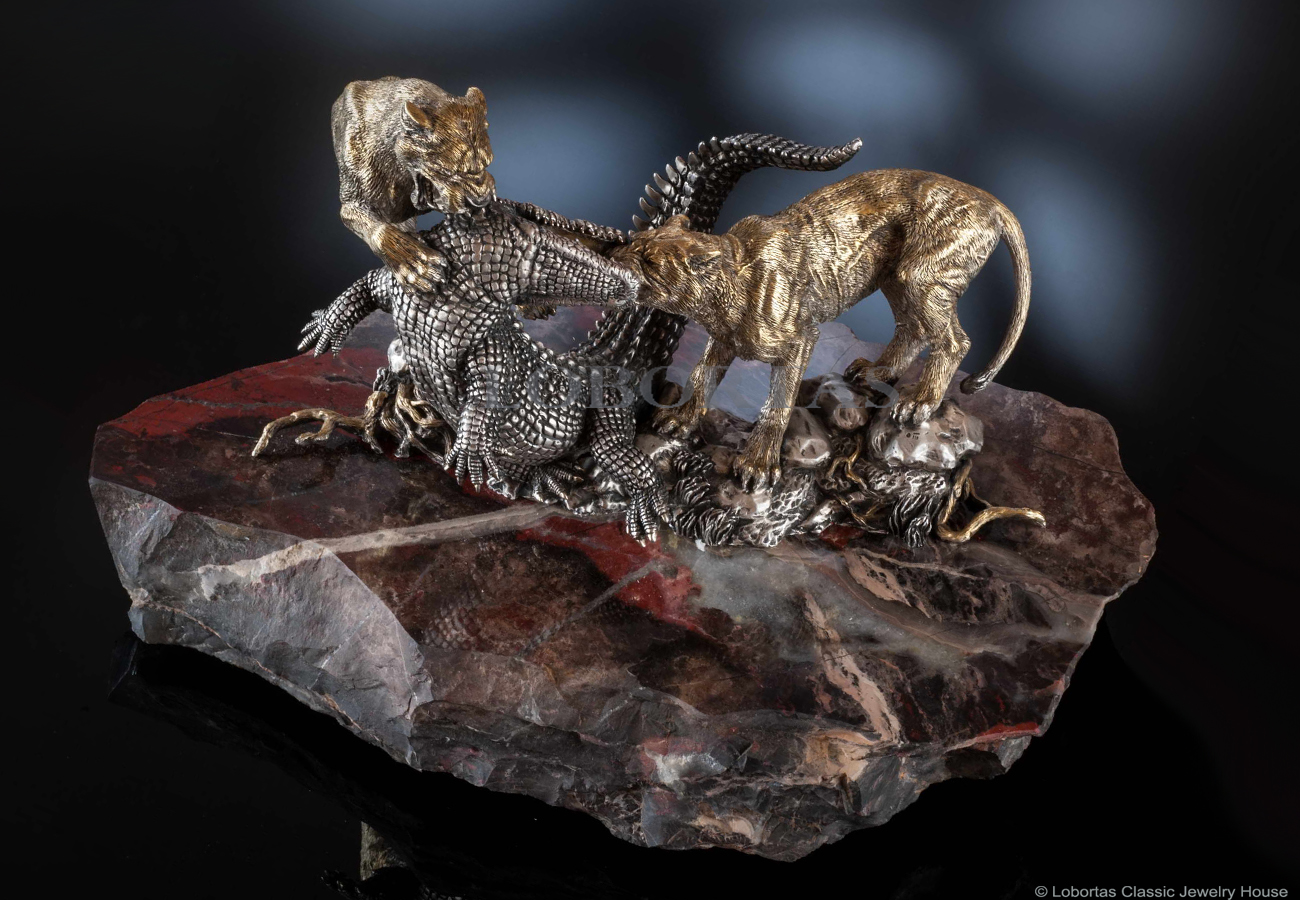