C&E: What if we compare Faberge and such famous companies as Cartier, Boucheron, Tiffany?

The world Paris exhibition of 1900 was a triumph not only for Faberge. Map of France the unique masterpiece of stone-carving art was made by Russian stone carver of the Ekaterinburg Imperial Lapidary Works for the world exhibition of 1900 in Paris. The Map was intended as a gift to the French Republic. 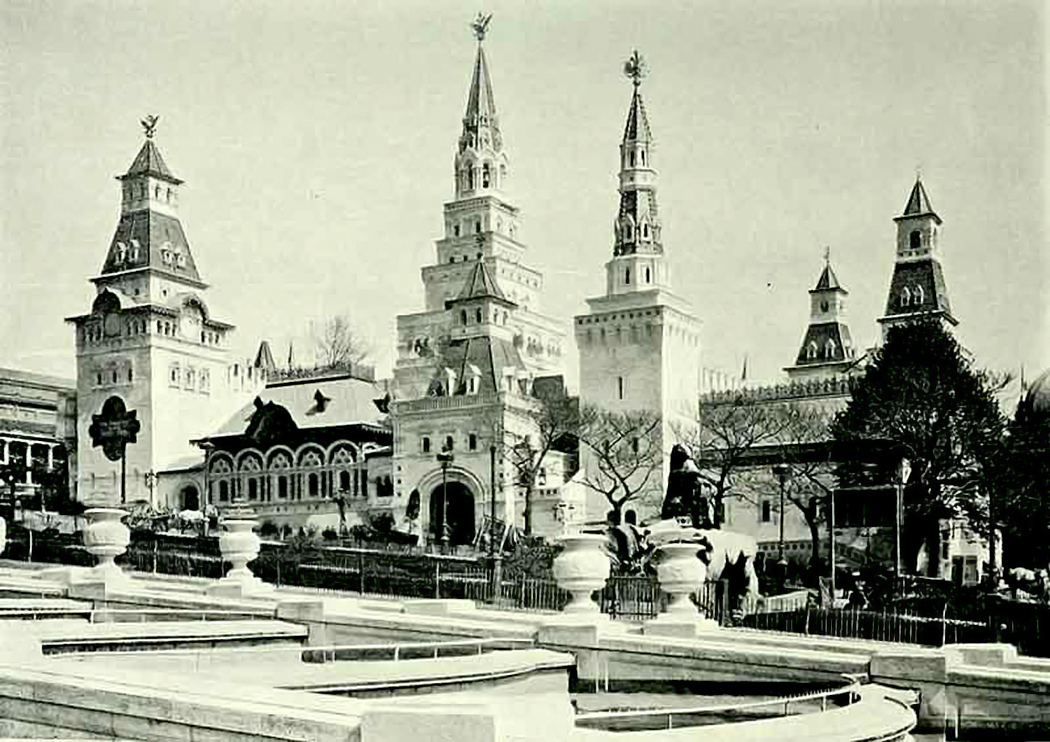 Russian pavilion at the Paris exhibition, 1900.

Work on the mosaic canvas was carried out in 1897-1900. Famous Ural miner Danila Kondratievich Zverev (1858-1938) selected the stones and participated in the manufacture of the Map. It took 25 months of hard work of the whole team of Ekaterinburg Imperial Lapidary Works, who worked in three shifts (in two years there were only 15 holidays) to make the map. It was made under the project of Vasily Vasilyevich Mostovenko (1850-1917), Director of the works, and under his direct supervision. He demanded an especially subtle and careful work from the artisans. 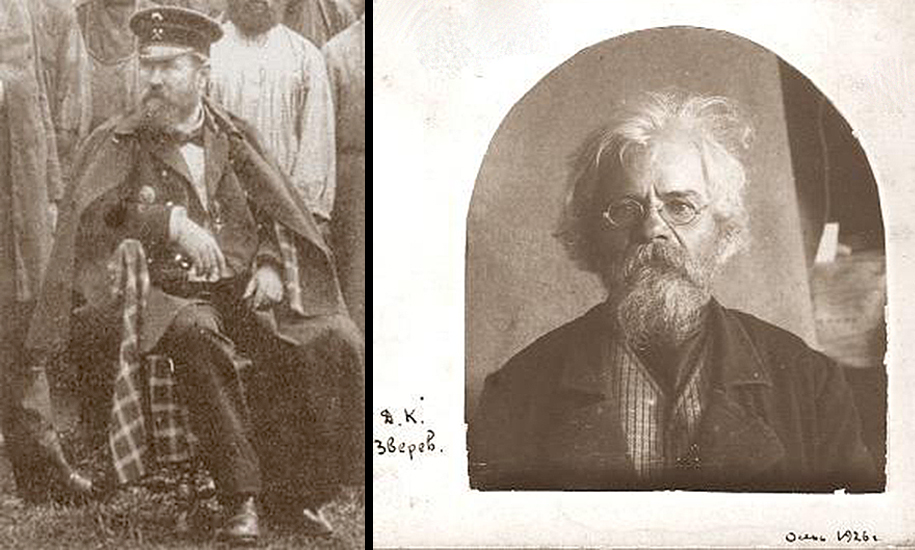 Mosaic map of France got the highest award at the exhibition, and V. V. Mostovenko, the Director of the Works, got the Commandeur Degree of the Legion of Honor. Currently, the work is stored in the Museum of Compienne in France, in the Chateau de Compienne. 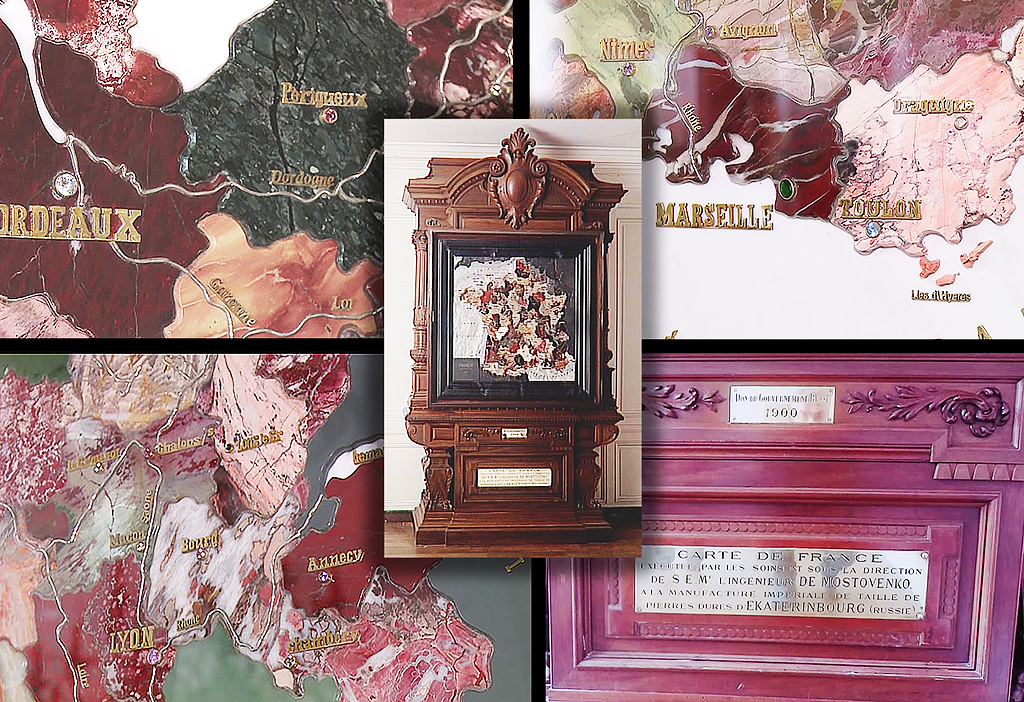 Along with Faberge, Aleksey Kuzmich Denisov-Ural'sky and Avenir Ivanovich Sumin made an equally significant contribution to the domestic stone-carving art.

Avenir Ivanovich Sumin (1869-1913) became famous for his stone-carving works mainly animalistic figures, most of which were the gifts for Royal children. The workshop located on Nevsky prospect, in the house No. 46, was called "Siberian Ural Stones" and was founded by his father Ivan Sumin, holding the post of lapidary foreman at the stone stockhouse of the Cabinet of His Imperial Majesty in 1869. In an effort to withstand competition by reducing the cost of production while maintaining and even improving the quality of performance, Ivan Sumin always vigilantly followed the latest technology, which is why he earned a bronze medal "for the distinct lapping of artificial and precious stones" at the All-Russian Exhibition in Moscow in 1882. 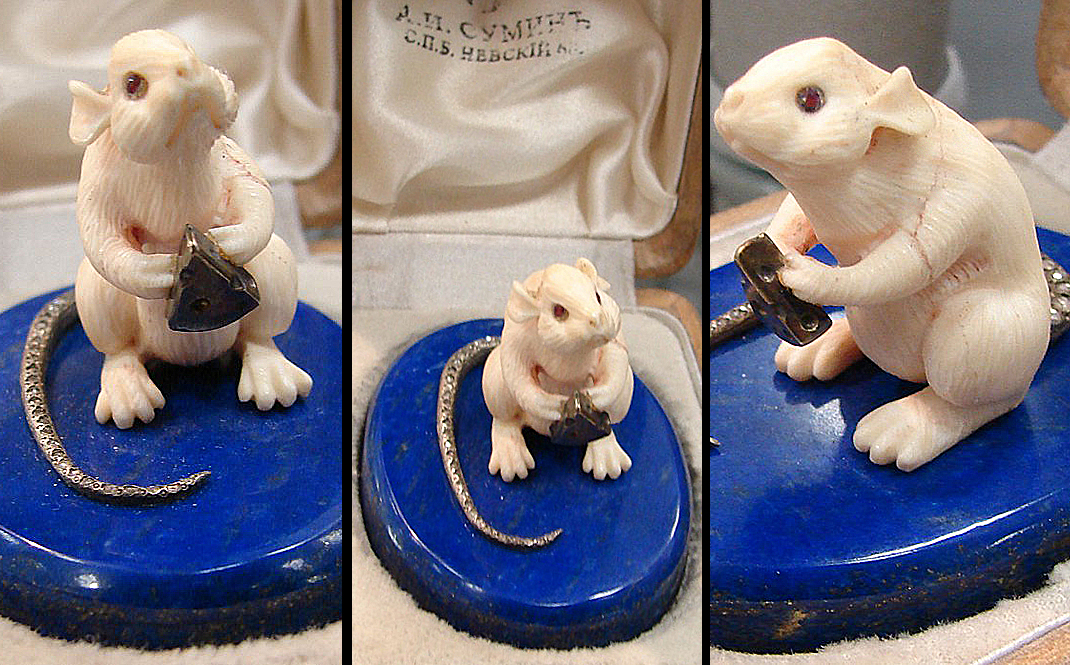 A. I. Sumin Mouse Statuette.

After the death of Ivan Sumin in 1894, his heir, Avenir Ivanovich Sumin, headed the firm. Avenir Sumin signed as "Ювелир Сумин", which means "Sumin the Jeweler". His miniature sculptures depicting all kinds of animals were at prices 3-5 times lower than that of Faberge, while being not inferior in quality. In may 1913, Avenir Sumin got the title of the "Supplier of Empress Alexandra Feodorovna". However, Carl Fabergé had to contend with him for not long time: Avenir Sumin died in the autumn of 1913.

Alexey Kuzmich Denisov-Ural'sky (1864 — 1926) was born in Ekaterinburg in the family of a stone-carver. From a young age, Alexey mastered the intricacies of stone-carving business – from the simplest actions to the creation of separate works. In 1882, he first showed his works of stone at the All-Russian Art and Industrial Exhibition in Moscow. 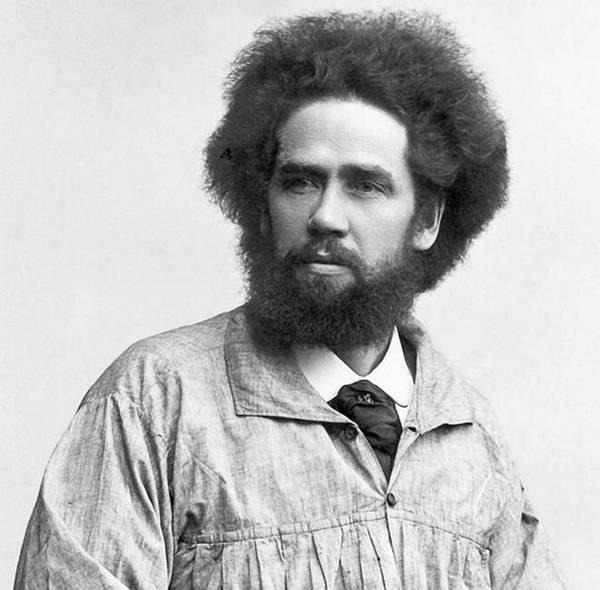 For a short time, he studied at the Drawing School at the Imperial Society for the Encouragement of the Arts in St. Petersburg. In the late 1880s, the master stone carver and self-taught artist went to conquer the Northern capital, having behind him the experience of participation in major national and international exhibitions in Moscow (1882), Ekaterinburg (1887), Copenhagen (1888), Paris (1889). In 1891, he opened Ural in Painting, the first solo exhibition in Ekaterinburg. 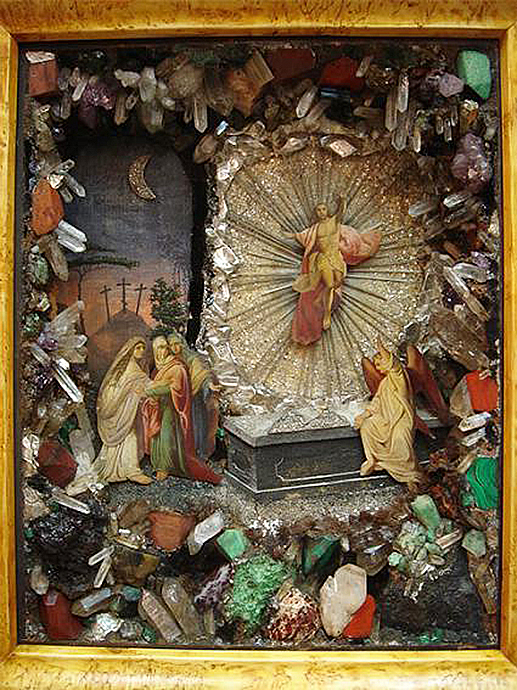 A. K. Denisov-Ural'sky Stacked image of the Ural gems.

In the early 20th century, he finally moved to live in St. Petersburg and added the word "Ural'sky" to his name. He founded the Mining Agency for the Distribution of Minerals of Russia. A. K. Denisov (Ural'sky) and Co. 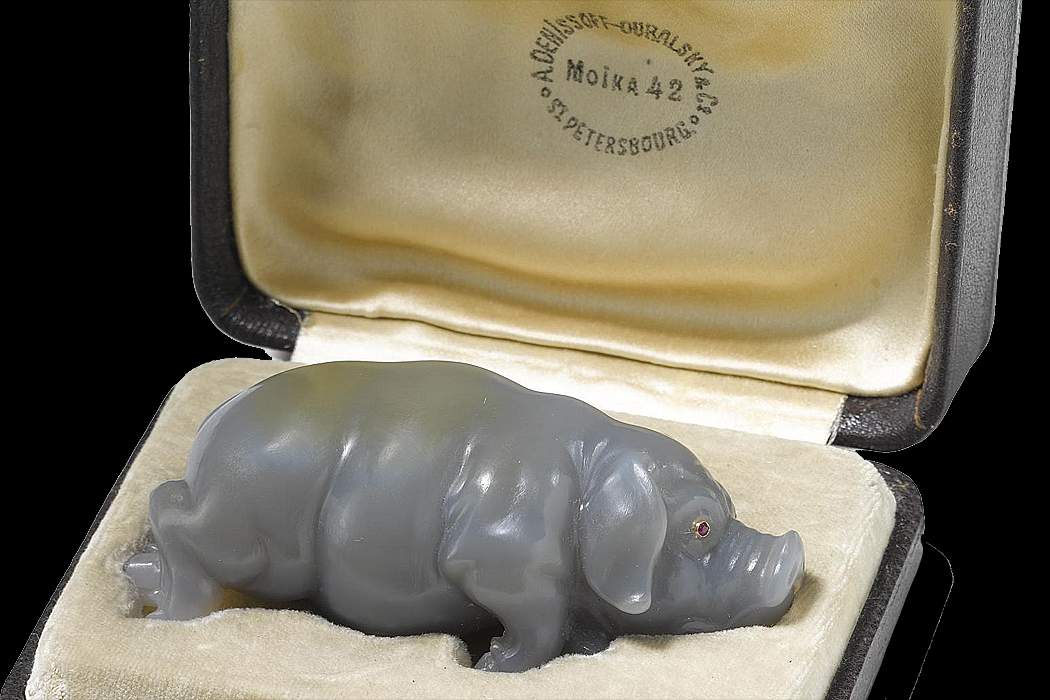 In 1912, Alexey Kuzmich became one of the co-founders of the Russian Gems Society for the Promotion and Improvement of Handicraft and Lapping, on the basis of which the famous St. Petersburg enterprise specializing in the processing of ornamental stones appeared. 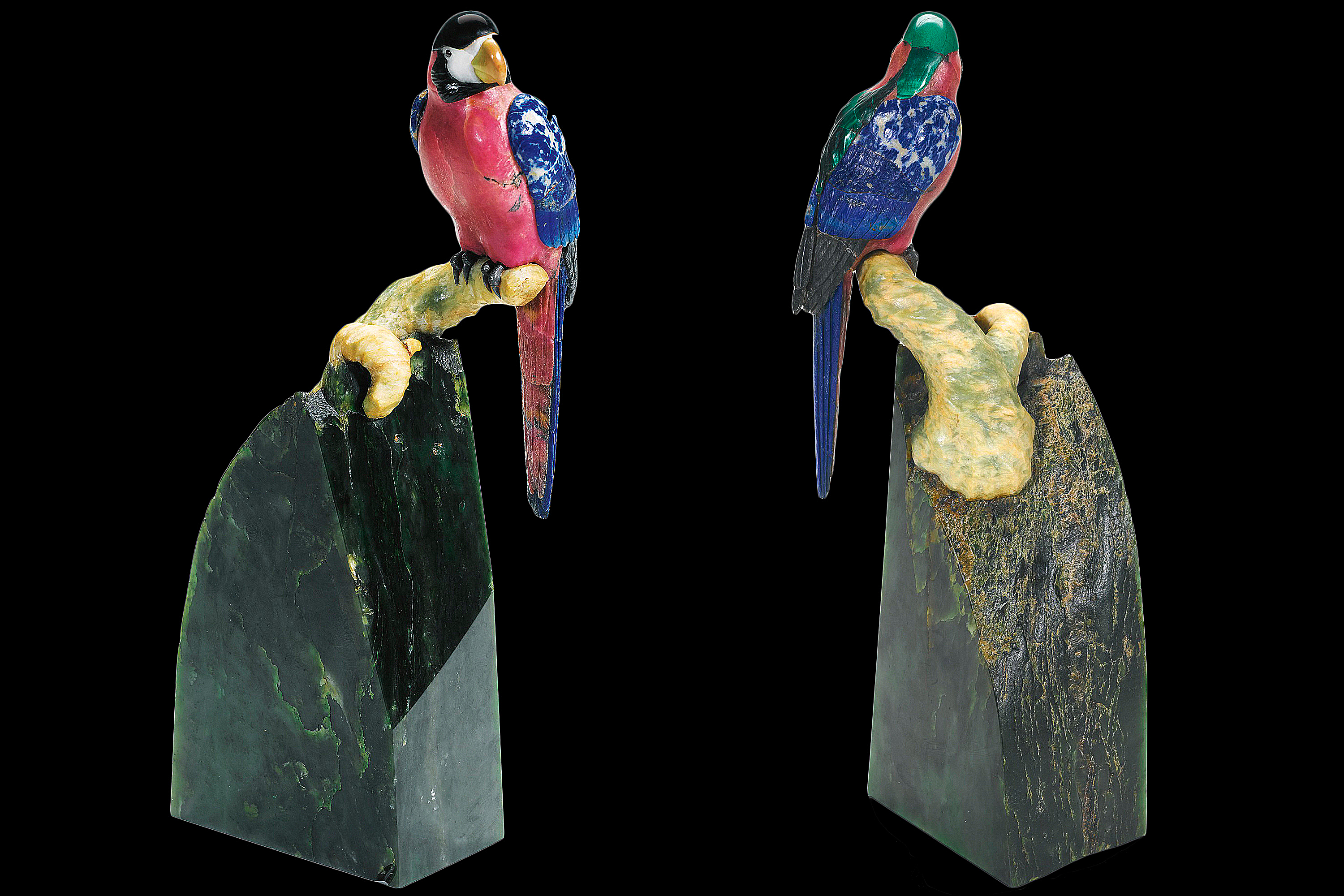 Remarkable stone-carving works are authored by Denisov-Ural'sky, he made sketches for jewelry, his company traded mineralogical collections, and he was a rival for Faberge and a supplier for Cartier. The beginning of the World War I, the losses of the Russian army and the suffering of the people force the artist to take a fresh look at his work. He takes part in a charity exhibition of painters. Events make him turn to his favorite stone and start creating a special series of allegorical images of the warring powers. 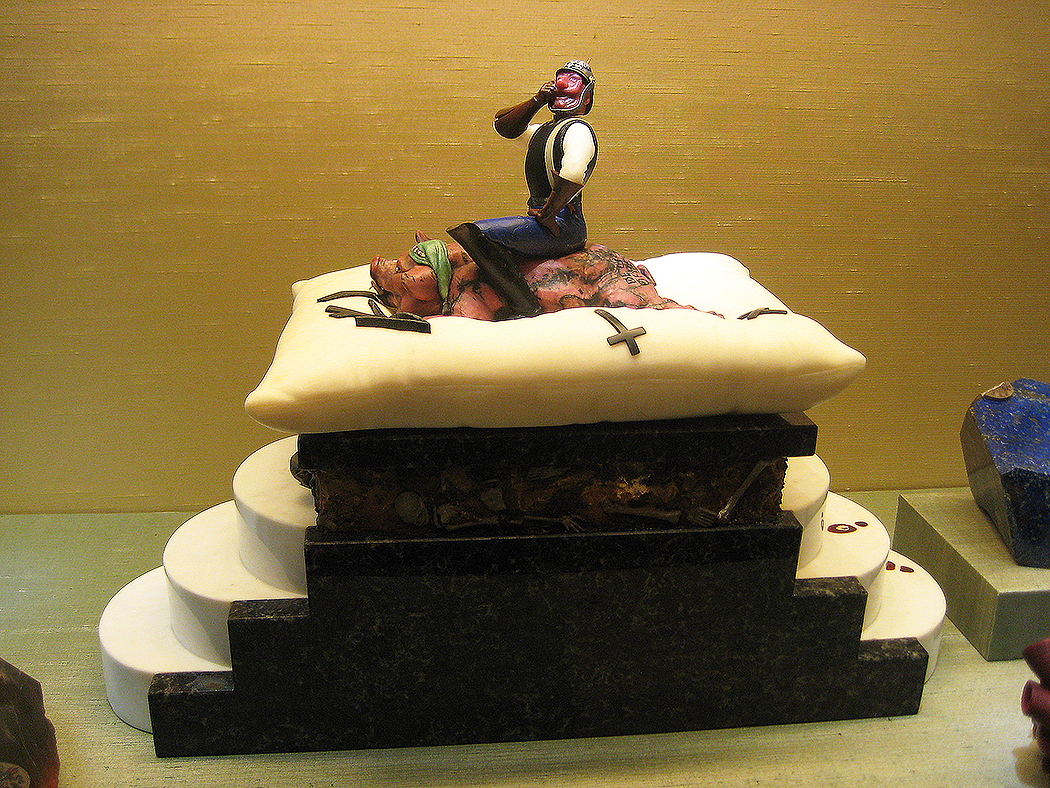 Allegory of Germany. Germany (opponent). Kaiser Wilhelm II sits on a high three-step throne with the inscription WILHELM II, riding a pig lying on a large white pillow. Along the perimeter of the throne, there is the relief image of human skulls and bones; on the steps, there are bloody footprints; on the pillow, there are black crosses, a symbol of death. On the back of the figure of the pig, there is an inscription "Deutschland über alles" (Germany above all). Warring Powers, allegorical figures of the states taking part in the World War I is a cycle of statues of the Ural semi-precious stones, were created in St. Petersburg in the workshop of Alexei Kuzmich in 1914-1916. 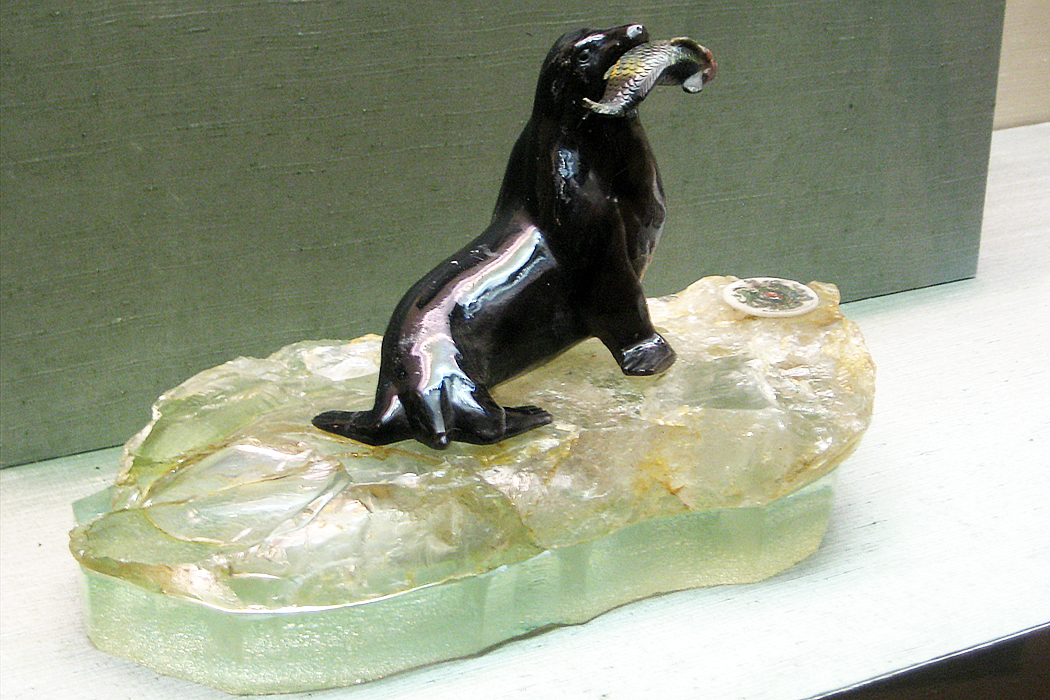 All compositions are made in an extremely complex technique of "three-dimensional mosaic": details are carved from different types of stone and fastened together with pins and glue. These works became the basis of the last lifetime exhibition of the artisan.

When processing the stone, the main task of artists and stone carvers of Lobortas is to emphasize the beauty of the material and to identify its individual artistic expression. In a work of art, these qualities are embodied through thoughtful composition, the use of surface texture of the material, pattern, color and special optical effects, as well as technical means of stone processing.

Sea of Galilee. House of Lobortas.
Photo by Vladislav Filin.

The artistic idea and artistic image of the future work often prompt the author of the inherent properties of the material. The variety of color of the stone, change in its color depending on the lighting and surface treatment, the manifestation of additional hidden effects in its depths – all this contributes to the creation of highly artistic images.