The sculptor Demétre Chiparus, one of the most famous students of Ferdinand Preiss, specialized in the dancer figurines is considered one of the brightest representatives of Art Deco, who worked in the style of chryselephantine technique. Chiparus paid special attention to the transfer of the texture of exotic costumes. In this, he surpassed even his teacher Ferdinand Preiss. Diaghilev's Russian ballet, which had a huge impact on the artistic community of Europe, was a special love and source of inspiration for Chiparus. 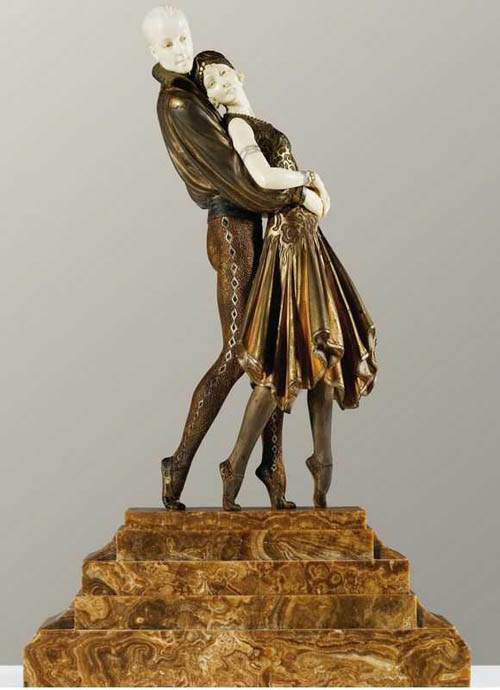 The future sculptor was born in Romania in 1886, but in 1909, he moved to Italy, where Raphaello Romanelli taught him. This journey is not over for him, and three years later he emigrated to Paris, the capital of world art, by continuing his studies at the Parisian Académie des Beaux-Arts. There he took lessons from Antonin Mercier and Jean Boucher, the famous masters of his time. Nevertheless, their influence on the formation of the artistic style of Chiparus was quite modest. 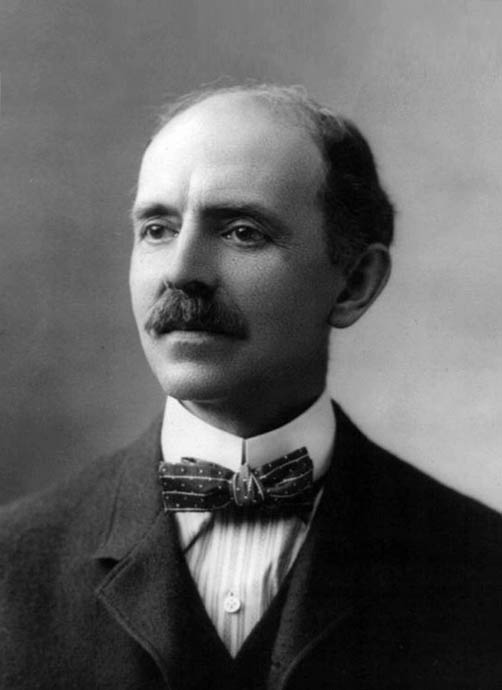 In the early 1920s, people talked about Demétre Chiparus as an interesting and original sculptor. By that time, his works, structured by showiness, decorativeness, elegance became recognizable, the artisan's hand was already determined; his unique manner was formed. 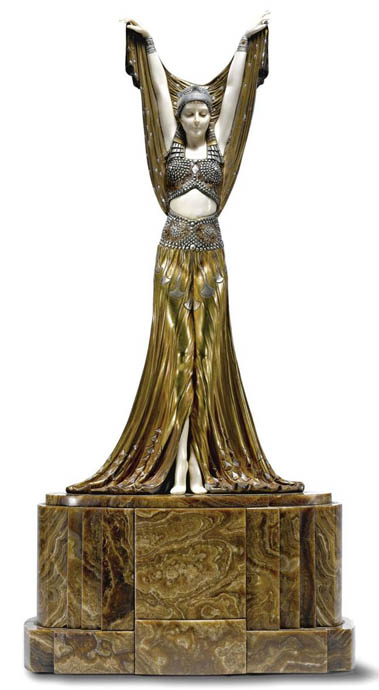 The combination of "warm" ivory and pliable bronze became his trademark. Created by his hands, charming dancers of different eras and peoples are stunningly beautiful. Indian, Persian, French, Egyptian and Russian beauties are spinning, standing on tiptoe, bend their Swan necks, and pull refined wrists… 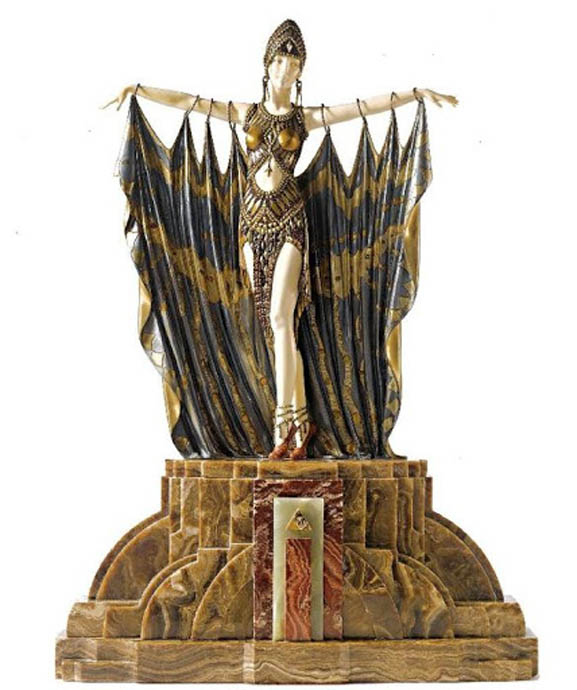 Their intricate outfits, recreated in bronze, amaze the imagination. It seems simply unthinkable that the metal fell so lightest folds, turned around slender legs twisted in pirouette, hugged the chiseled waist, became a velvet, silk or the finest lace. Each fold of fabric is about to sway, each movement is waiting for completion; each bend of the body is the very perfection. 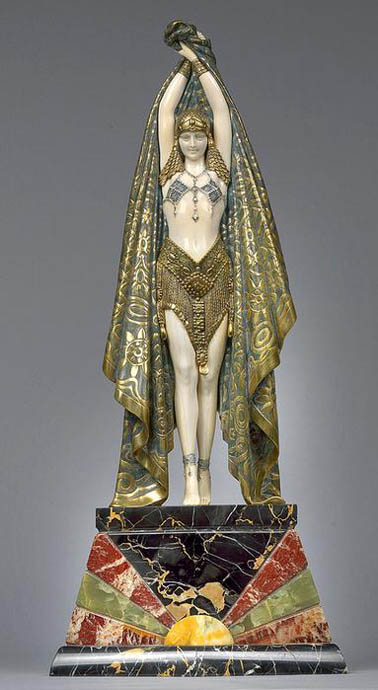 Meanwhile, everyone who has seen his creations, discover a new attractive world created by a talented sculptor and striking special subtlety, stunning plastic, jewelry attention to every detail. 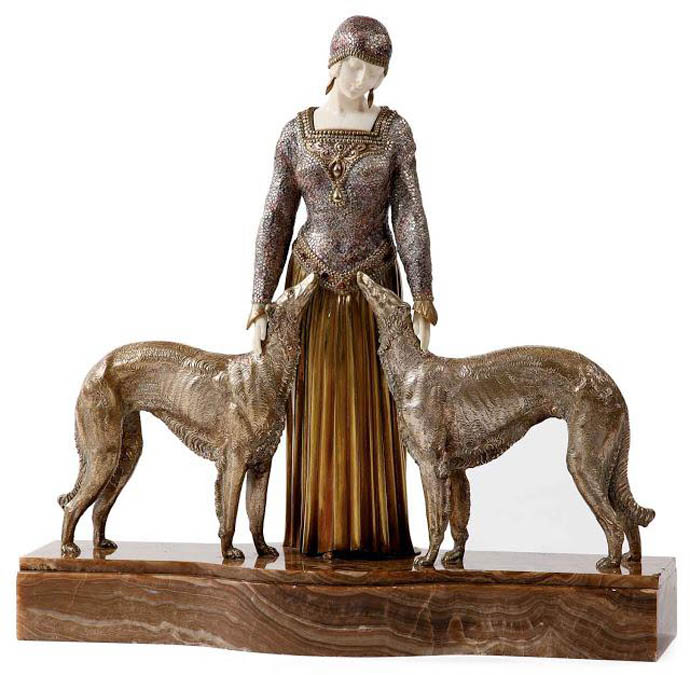 Few people know that Chiparus, being a successful sculptor, painted pictures. They were painted not for commercial sale, but for personal pleasure. Amateur artist, Demétre preferred sketches with his wife Julien Lhuillier, very rarely painted landscapes and still lives. Chiparus met Julien, who was younger than him by sixteen years, in 1924. They eventually married in 1939, having lived together for fifteen years. They had no children. Although Chiparus made his sculptures based on specific living models, it was inevitable that Julien's features, consciously or subconsciously, were attached to the images of dancers and medieval ladies. 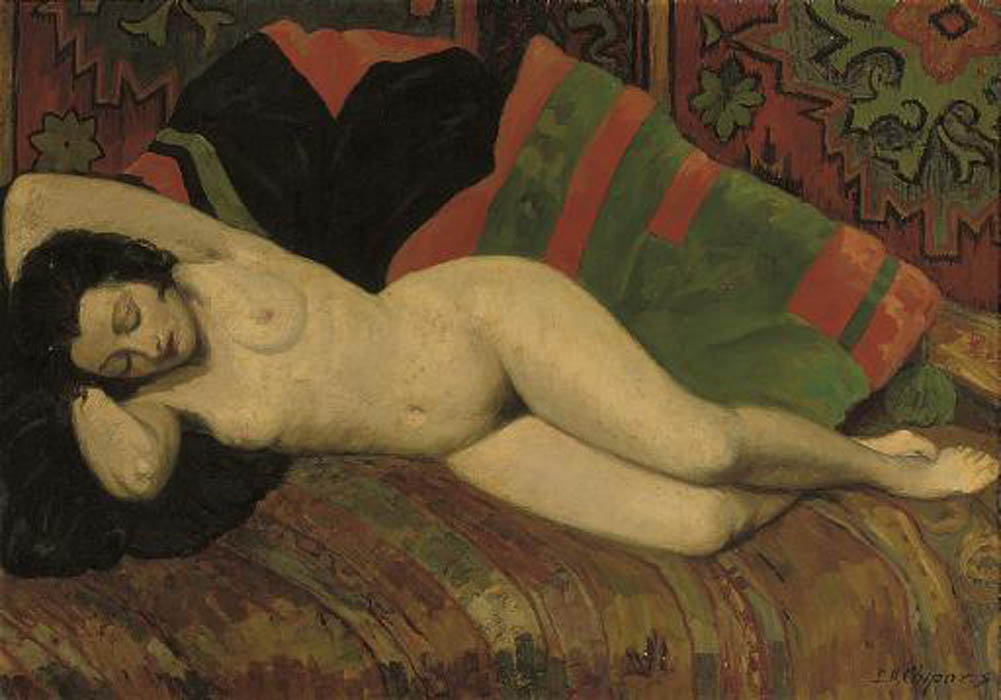 Enthusiastically accepted by the public, Chiparus is at the highest point of success from the mid-1920s to the early 1930s. In 1928, he and Julien moved from a tiny Studio on the Baro Street, to the elite Parisian suburb of Ney, on the Seine, to the house at 56 Boulevard Argenton, which they renovated in an extravagant style and built a large studio in the garden for the artist. 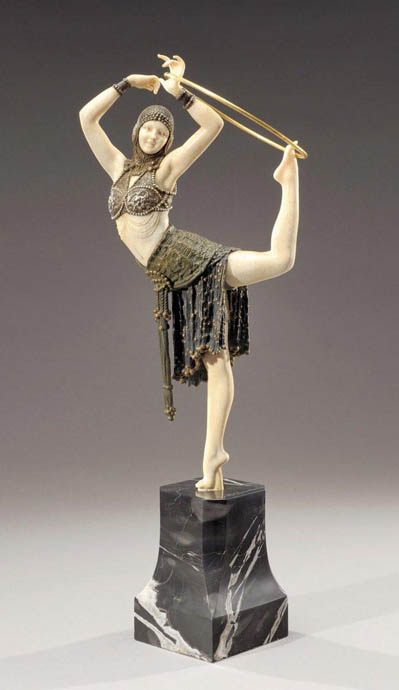 Models for sculptures by Chiparus were often specific dancers of the Parisian stage. Thus, the Hoop Dancer, created in 1928, depicts Zoula de Boncza, talented dancer from the Parisian theater of Folies Bergere, a first dancer of The Belgrado Royal Opera and a Mime dancer of l'Opéra-Comique in Paris, and the figures of the Persian Dance sculptural group had the features of the famous dancers of the Russian troupe of Vaslav Nijinsky and Ida Rubinstein. 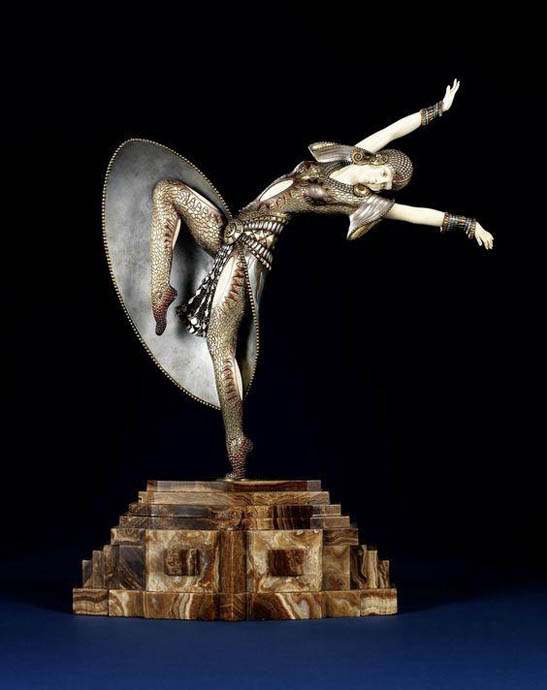 Almeria was one of the most famous and refined of his works. Almeria is probably one of the three most desirable figurines by Chiparus for the collector and is very rare at auctions. Almeria is believed to be modeled after Bronislava Nijinska, the ballerina, choreographer and ballet master, who was a member of the Sergei Diaghilev's Russian Ballet company and the sister of his former friend Vaslav Nijinsky. Her image is one of the most refined and visually dramatic studies of Chiparus. It was her figure to have embodied the plasticity and drama of avant-garde dance in perfection. 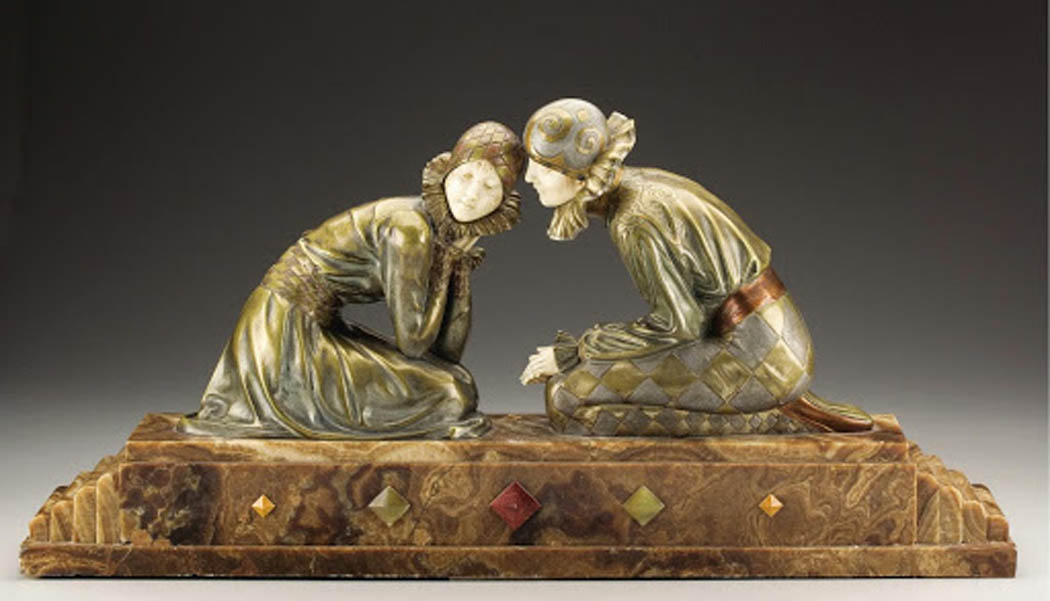 The couple lived in grand fashion, but by 1936, both the house and the expensive furniture were sold to pay the accumulated debts. Chiparus and Julien moved into an apartment at 7 Dekam Street, in the chic but less expensive Parisian site of Trocadéro. During the late 1930s, the luck left the sculptor completely. With the sudden outbreak of World War II, the Nazis closed most of the foundries that produced his works, as they belonged to the Jews. 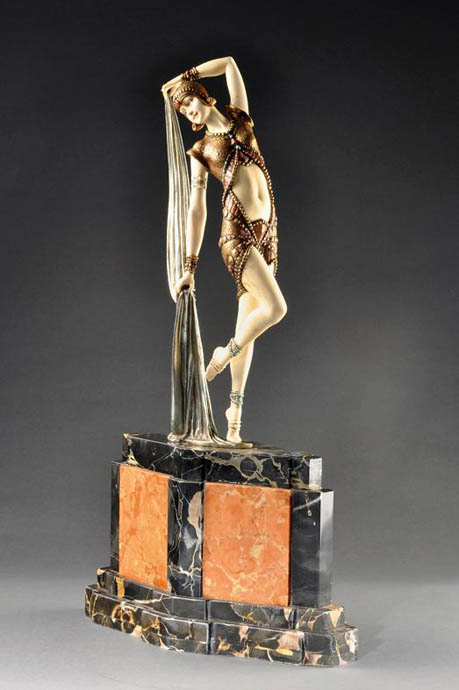 The last address of the Chiparus family is a tiny studio apartment in the 14th district of Paris. Demétre took such a twist of fate with equanimity, almost ironically. He continued to sculpt for his own pleasure, without regard to the prospect of sales, trying to maintain his inner harmony. 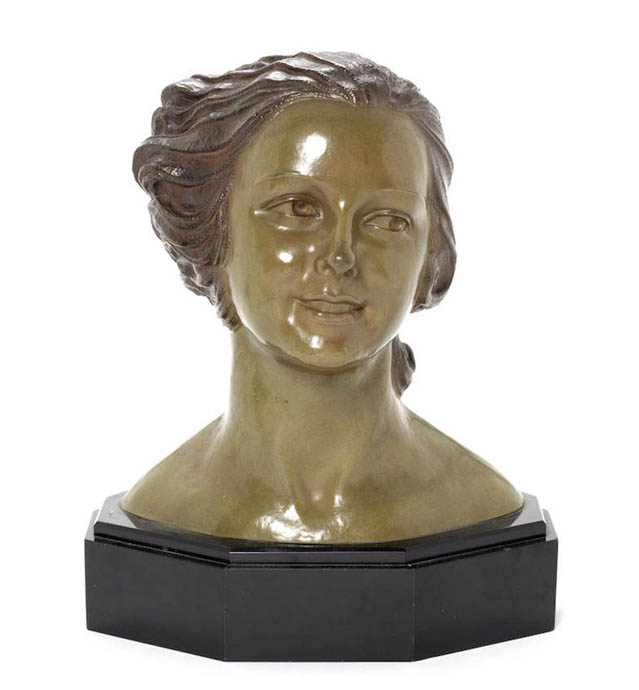 Later, the final period of the artisan's work fell on the years of World War II and the time of Nazi occupation of Paris. Extant rare terracotta sculptures by Chiparus, created in 1942-1943, were exhibited at the Paris Salon. It can be assumed that the extant terracotta models, not immortalized in expensive bronze, not cast in spiatra in high volume, often of a personal nature, give us some kind of great artisan’s creative soul kept a secret. 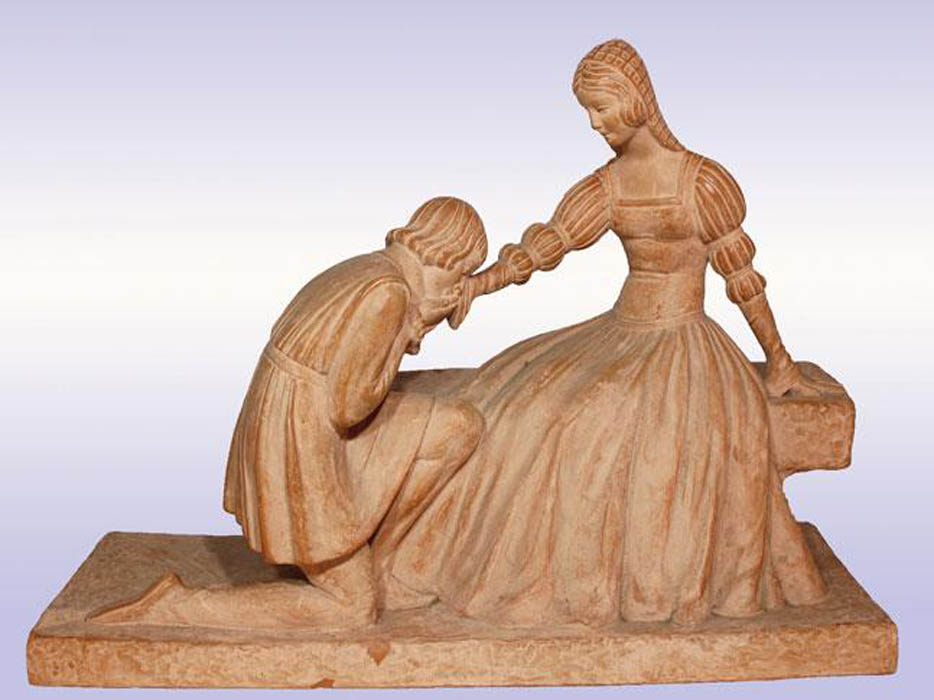 January 22, 1947, Demétre Chiparus, who was experiencing hard times, died of a blow upon his return from the Vincennes Zoo, where he constantly went to make sculptural sketches. Precious creations of Demétre Chiparus became a kind of synthesis of several artistic movements of the early twentieth century. They included cubism, constructivism, futurism and, to a large extent, Art Deco. Nevertheless, a unique hand of the artisan marked the technique of creating figurines and artistic and decorative style. In general, the sculptures by Chiparus became the absolute embodiment of the Art Deco era, striving for luxury and refinement. They were a response to the demands of their time in the most elegant form imaginable. Carriage of the figure in space, the transfer of its movement, posture, gesture, chiaroscuro modeling, enhancing the relief of the form, architectonic arrangement of volume, the visual effect of its mass, weight relations, the choice of proportions, specific in each case, the nature of the silhouette, are the main expressive means of sculpture created by artisans of Lobortas. 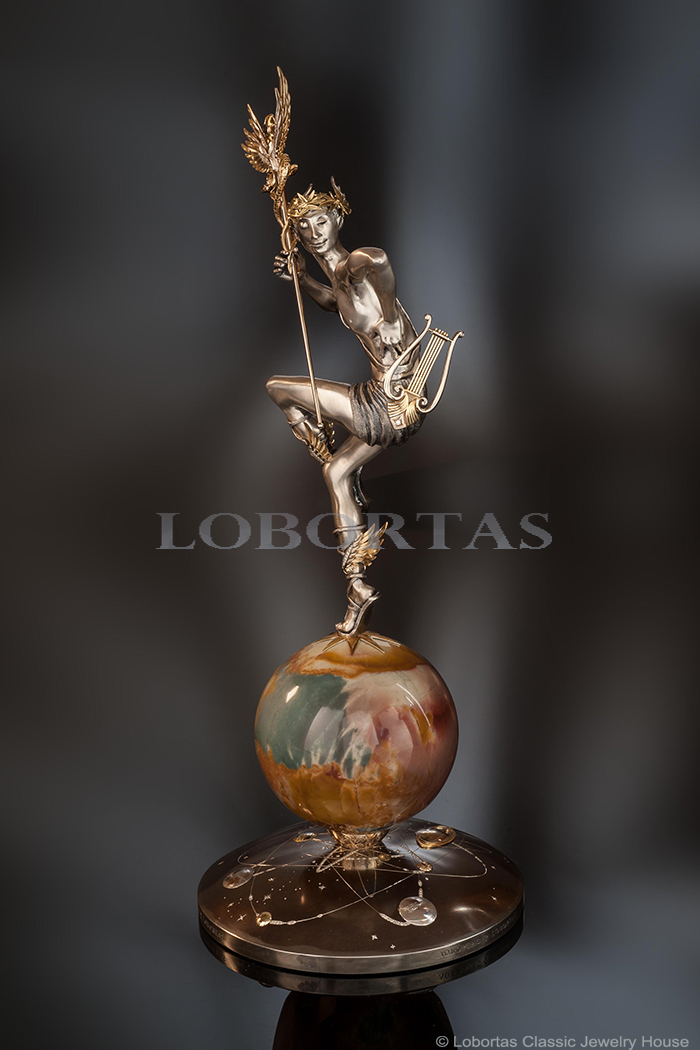 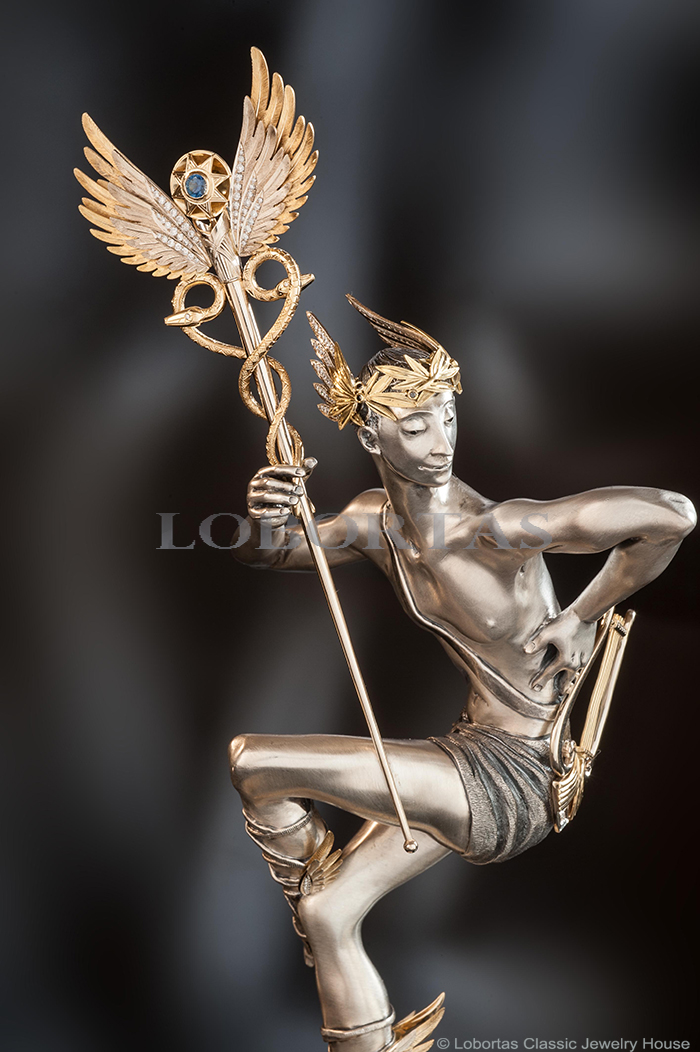