Luxurious and brilliant Art Deco, takes its origins in the 1920s-1930s, during a short respite between the cataclysms that shook countries and continents, as a kind of escape into the illusory world of comfort and traditional bourgeoisie, with its craving for comfort, chic, external presentability, attention to detail. People want beauty, elegance and respectability. And for a while, such a distraction appeared. The demand for painting, sculpture, interior details, made in the style of Art Deco, was very high. Art critics dubbed the way, in which Johann Philipp Ferdinand Preiss, Demétre Chiparus, Josef Lorenzl, Claire Jeanne Roberte Colinet, Pierre Le Faguays, Enrique Molins-Balleste, Max Le Verrier, Georges Lavroff and several other sculptors created, as "chryselephantine technique."

The founder of this style is a German sculptor Johann Philipp Ferdinand Preiss (1882–1943). He was one of the leading sculptors of the Art Deco period, who worked in the style of chryselephantine technique. 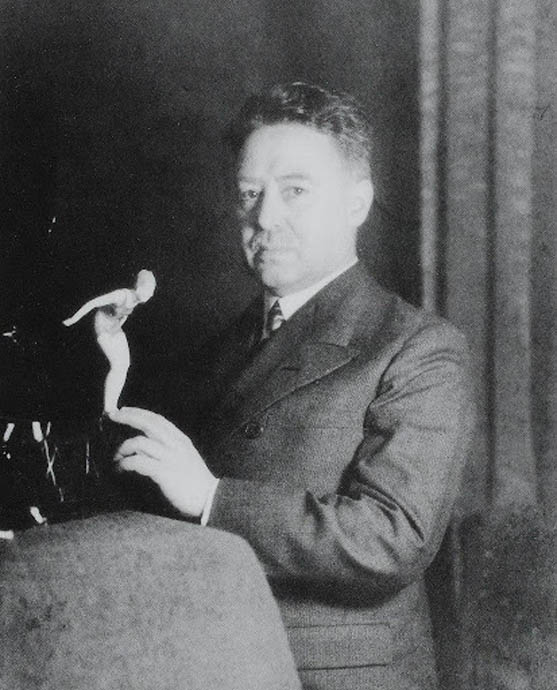 Ferdinand Preiss was born on February 13, 1882 in Erbach (Odenwald), in a large family. In 1897, having lost their parents, six children remain under the care of friends and relatives. Ferdinand lives with the family of Philip Willmann, the famous ivory carver. He studied the skill of carving from him. In 1901, Ferdinand left the Studio of Willmann and went first to Milan, then to Rome and Paris, earning a living as a fashion designer. In Baden-Baden, Preiss meets Arthur Kassler, who becomes his companion and they found the company Preiss & Kassler, with a workshop in Berlin. 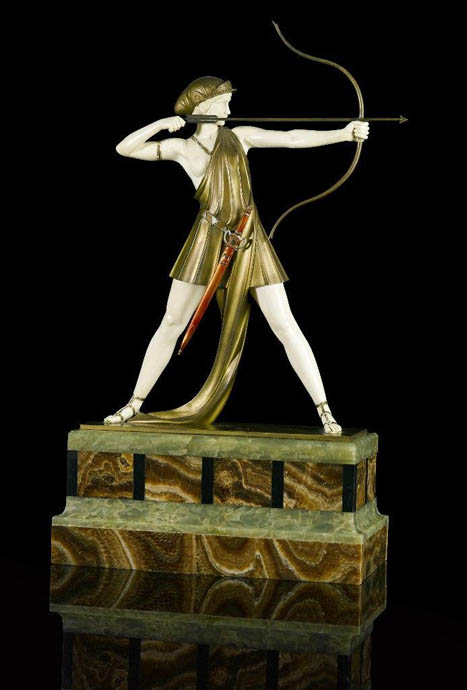 In 1907, Ferdinand Preiss married Margaret Hilme, a native of Berlin. Soon they give birth to a son Harry and a daughter Lucy. The Preiss & Kassler collection consists of small figurines of ivory, including statuettes of children and figurines, the motifs of which were mainly focused on classical ideals. Since 1910, Preiss & Kassler began to produce figurines by connecting bronze with ivory. By the beginning of the World War I, the company had six employees. All of them were outstanding ivory carvers from Erbach. 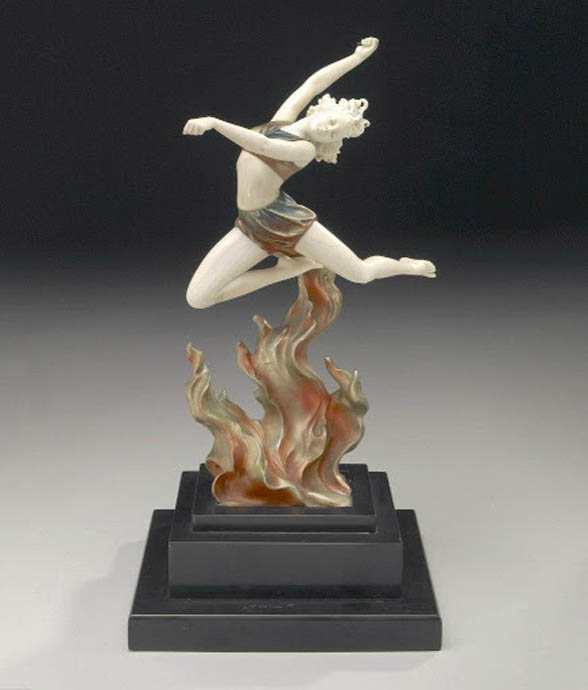 "The Flame Leaper" by Ferdinand Preiss.

Immediately after the war, Preiss & Kassler have restored their business that reaches full flowering in the 1920s. Preiss was the artistic Director, while Cassler devoted himself to the commercial side of the business. 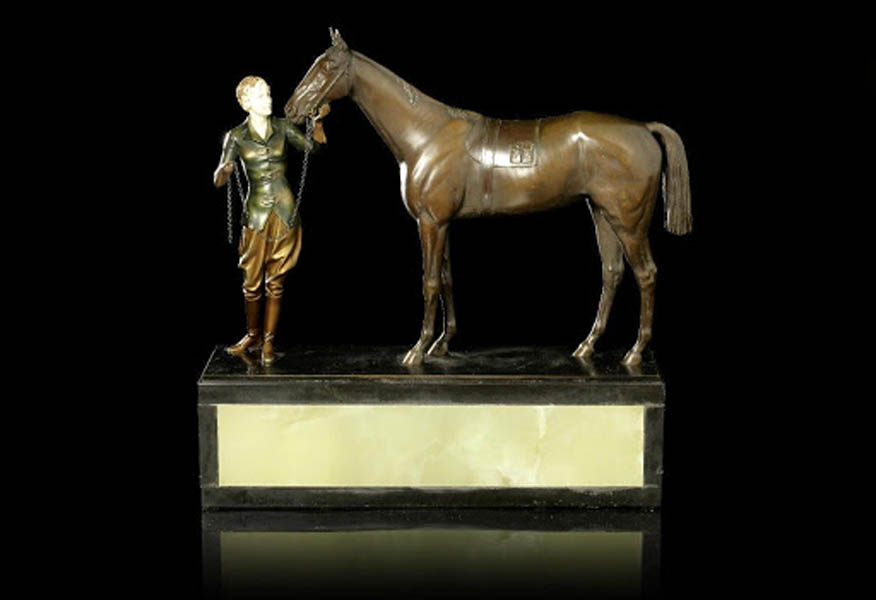 Statuette in the style of Art Deco. Ferdinand Preiss.

The popularity of the sports in the late 1920s has increased in all segments of the population, which was reflected in the works of the company. Ferdinand Preiss creates the series of The Olympians, dressed in sports clothes of young people playing tennis and golf, tossing spears. 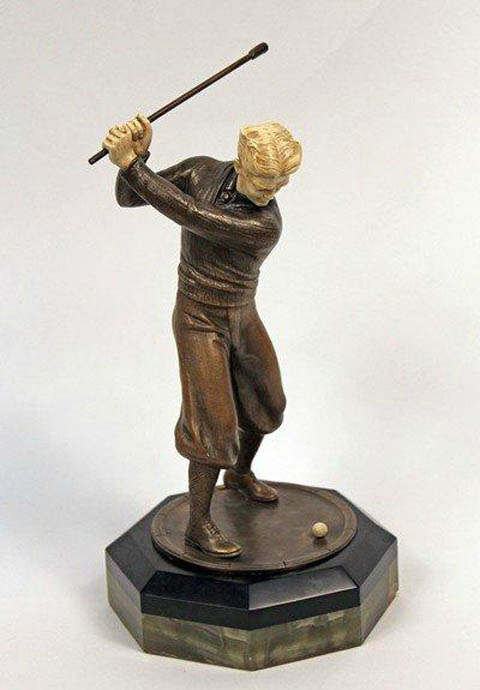 Almost all models were developed by Ferdinand Preiss himself, and were released in limited edition. Since 1914, the company's works have been exported to England and the United States. In England, the companions even created a small company to assemble sculptures from parts made in Germany. Freed from several operations of the technological process, the German company could produce more products, and the presence of the English company exempted from the English tax on imports. 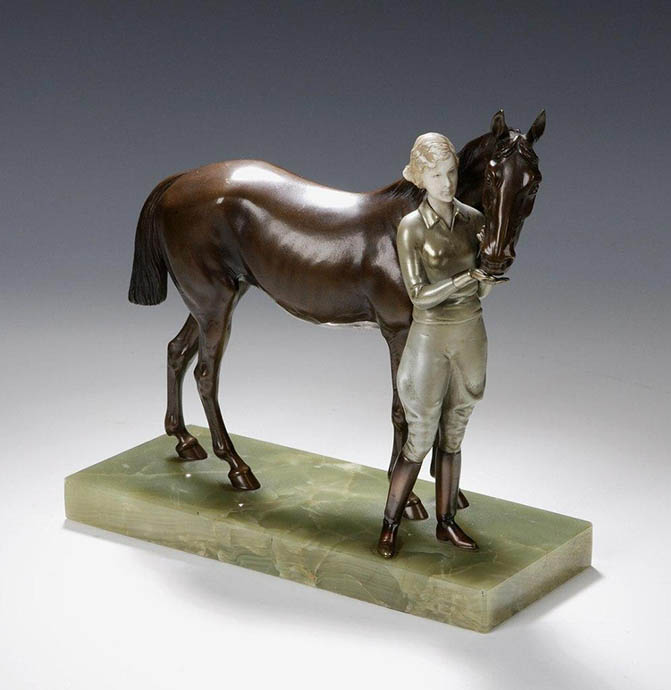 Statuette in the style of Art Deco. Ferdinand Preiss.

The company of Preiss & Kassler existed until 1943. Ferdinand Preiss died the same year, aged 61, of a brain tumor. The warehouse with the stock of samples at the Ritterstrasse in Berlin burned down completely in 1945 at the end of the war during the bomb explosion. Ferdinand Preiss figurines made of bronze and ivory are among the world's most expensive ones. Joseph Lorenzl (1892-1950), the Austrian sculptor, one of the most important sculptors of the art Deco period, whose creative activity fell on the 1920s-1930s, also equalled Ferdinand Preiss in skill. 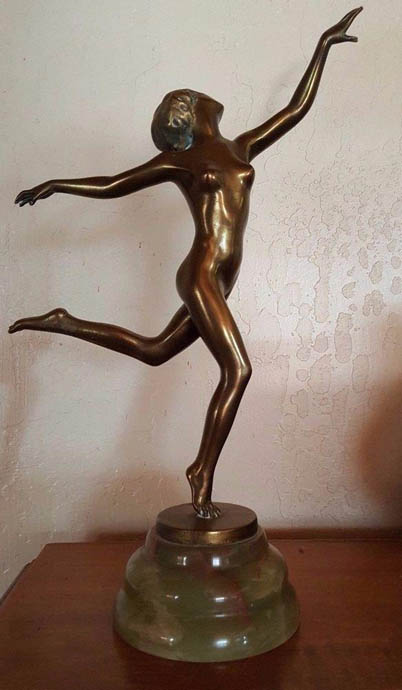 For his life, Joseph Lorenzl created a lot of "cabinet" sculpture, which played the role of a stylish and very prestigious artifact in the interiors of the time. A distinctive feature of his works is a generalized, idealized image of thin, slender young women with a serene calm expression. In his artistic practice, Lorenzl often used expensive technique of chryselephantine. 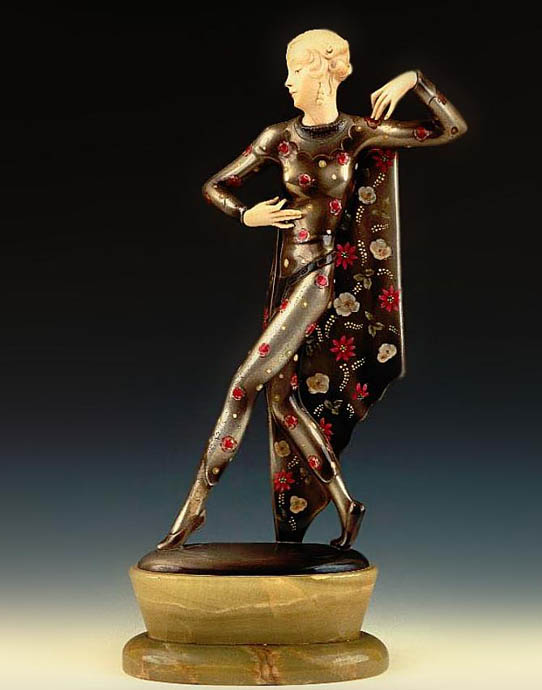 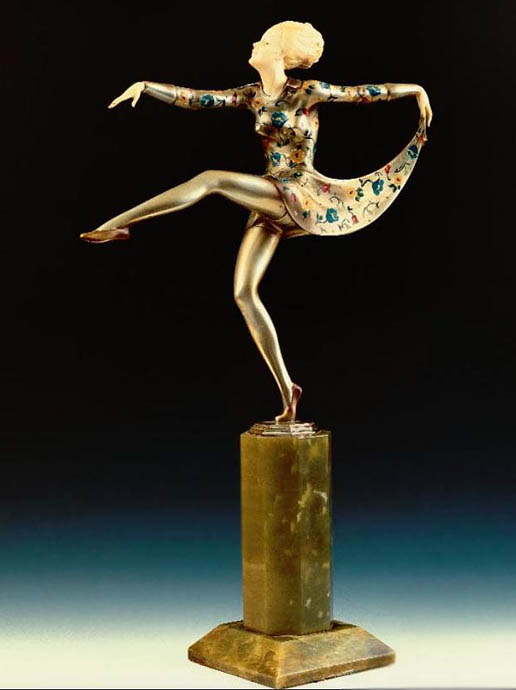 Many of his dancers are depicted naked or in unusual "provocative" poses, subtly emphasizing the sensual plasticity of the young female body. Claire Jeanne Roberte Colinet deserved the first place among the female sculptors of the Art Deco period. Her sculptures, most of which depicted beautiful and energetic odalisques or exotic dancers, have been exhibited posthumously in the Salon des Artistes Francais for almost 30 years. 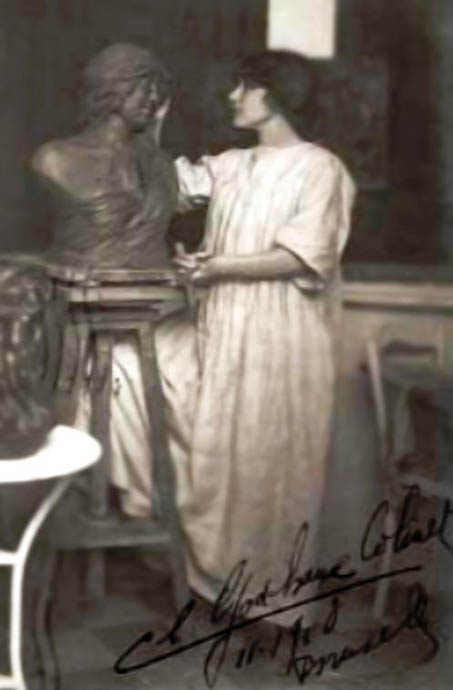 Colinet was born in Brussels in 1880. It is known about her life a little, except for the masterpiece works that she created during her successful career as a sculptor, which lasted for more than 40 years. 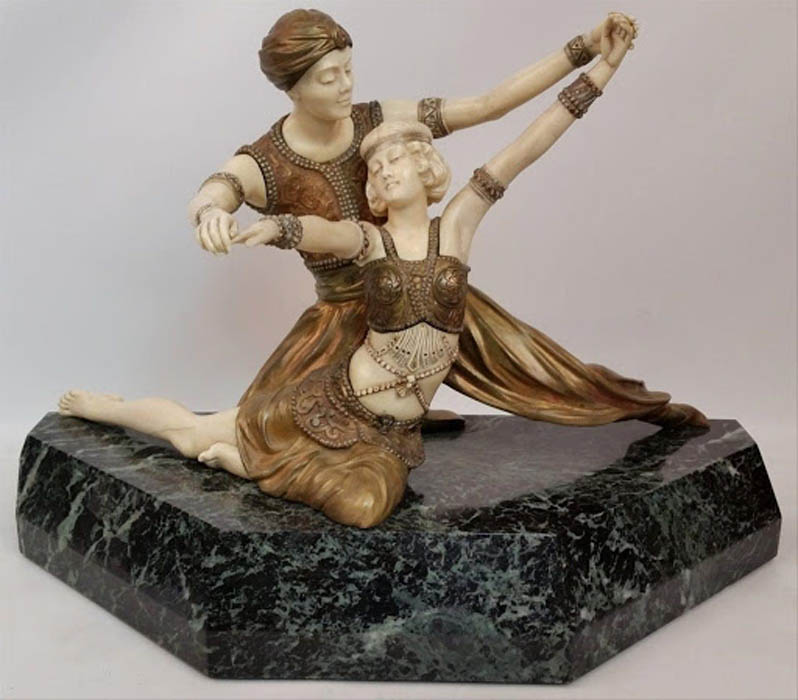 In 1910, Colinet emigrated to France, where she privately studied sculpture under the gaze of Jef Lambeaux. Her first exhibition will be held at the Salon des Artistes Francais in 1913, and she will become a permanent member of the organization in 1929. 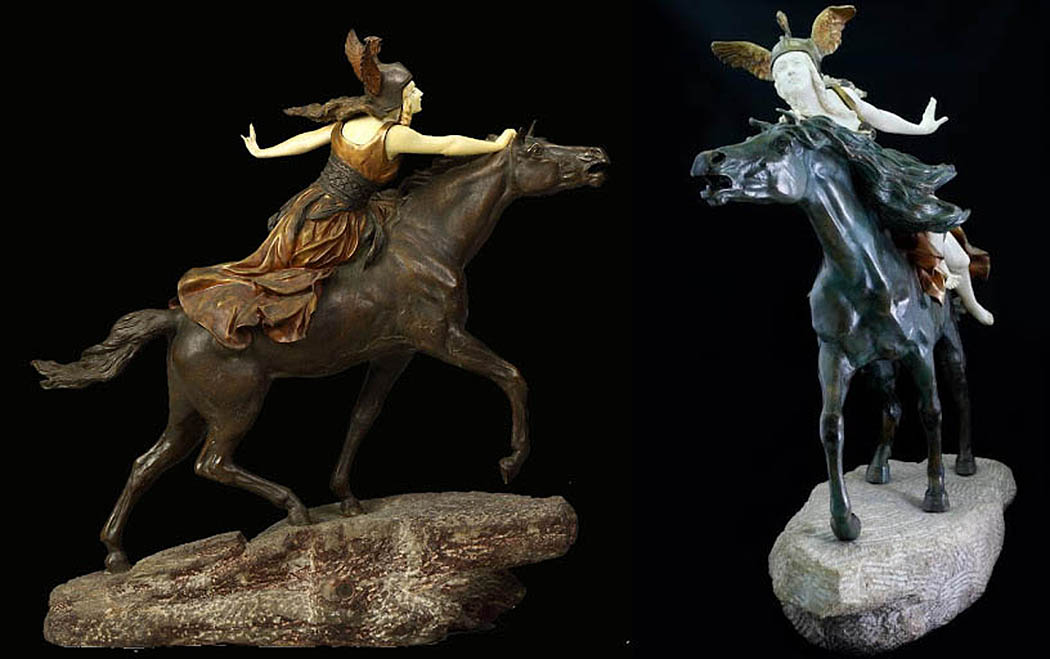 The talent of the sculptor and performance of Colinet are impressive. Her works are regularly exhibited at the Salon des Artistes Francais and Salon des Independents in Paris. 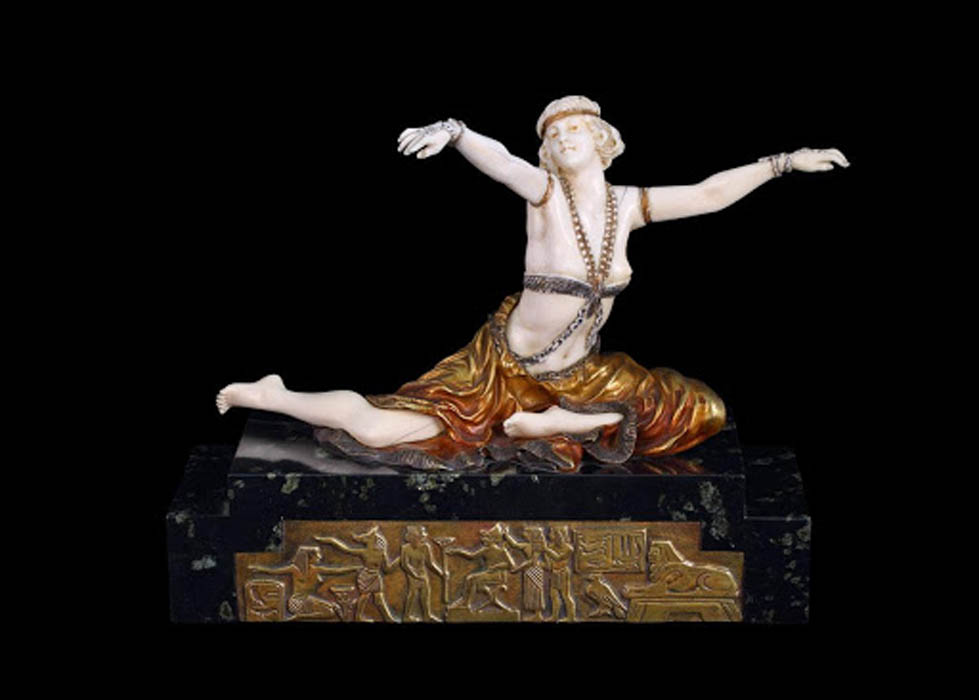 From 1937 to 1940, Clare Colinet exhibits her works at the Salon des Independents in Paris. Some of her recent work was influenced by the revival of the orientalist movement, which was popular in Europe from about 1860 to 1880. Around the same time, Claire joins the Union of Women Painters and Sculptors. 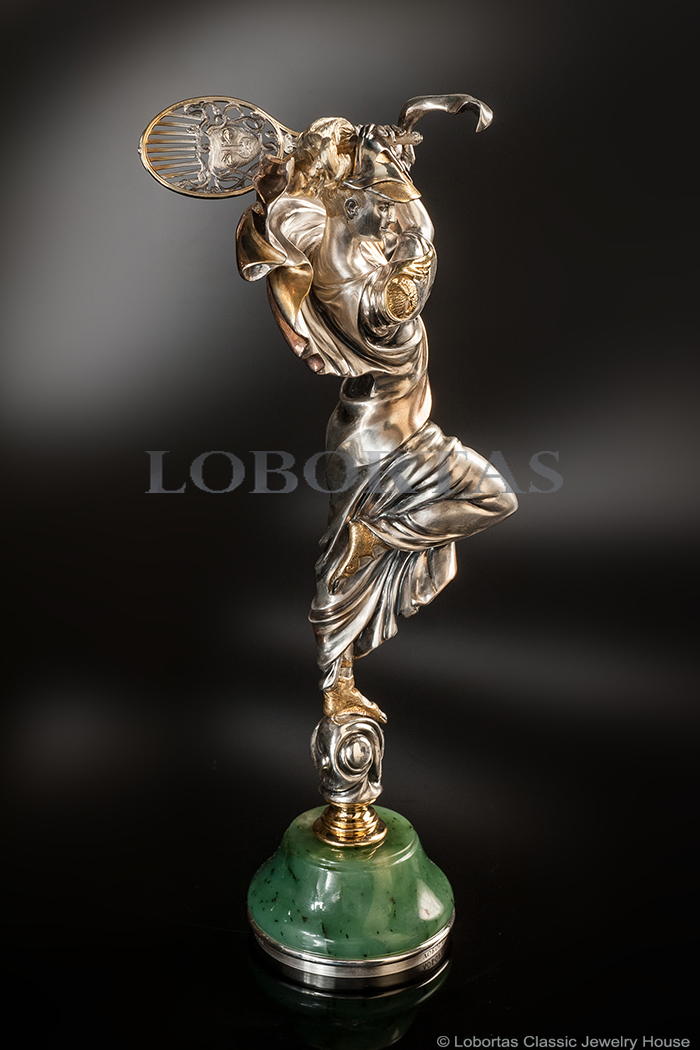 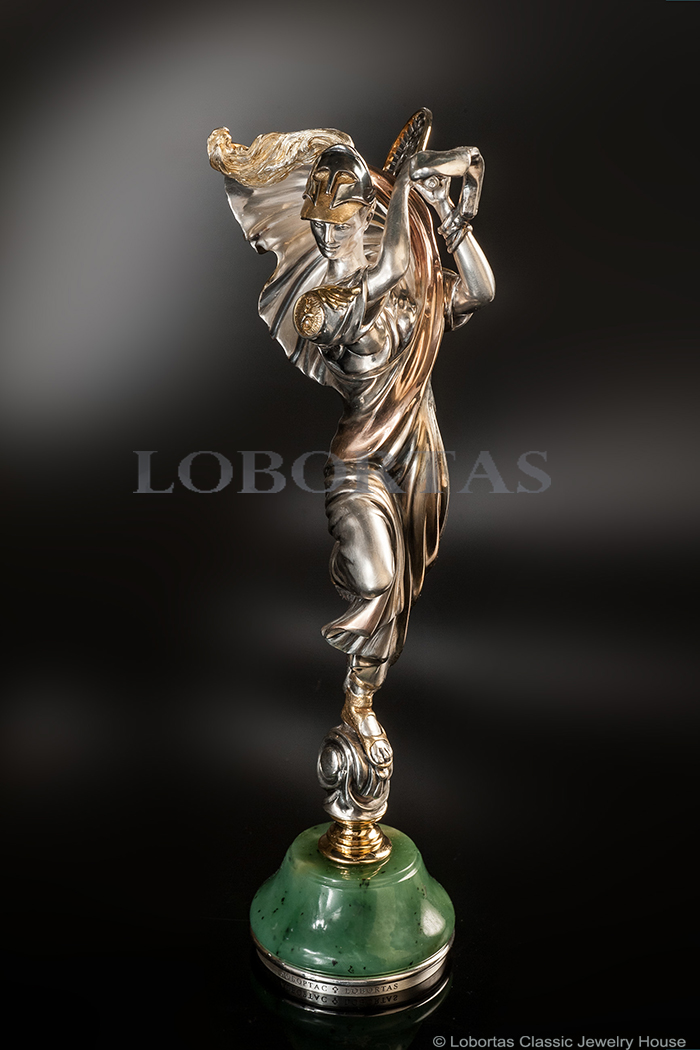 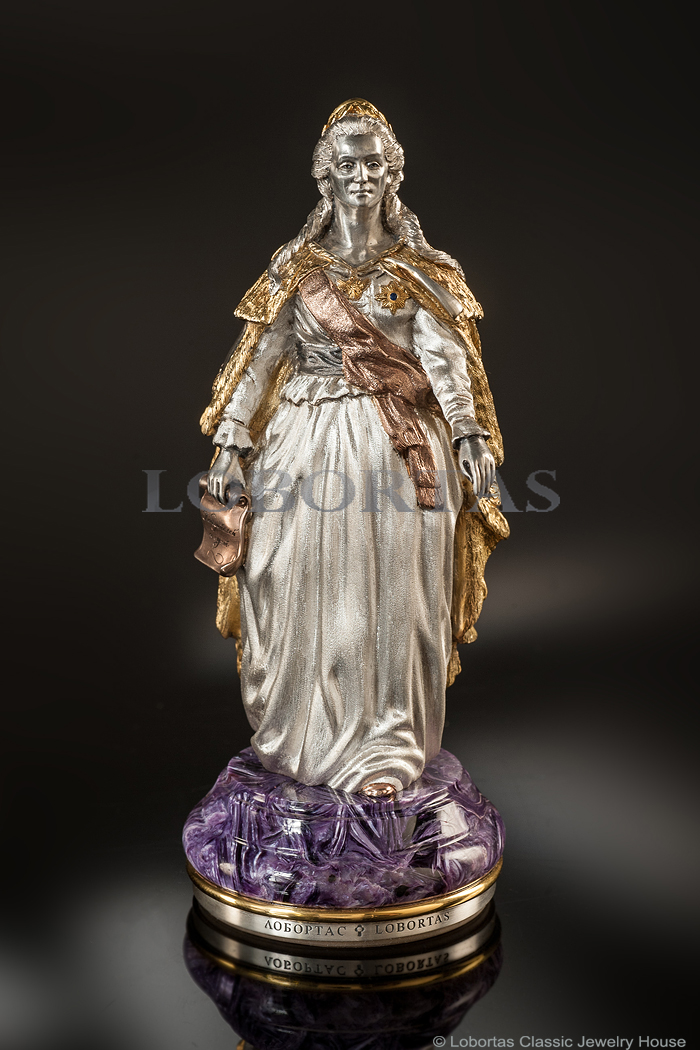 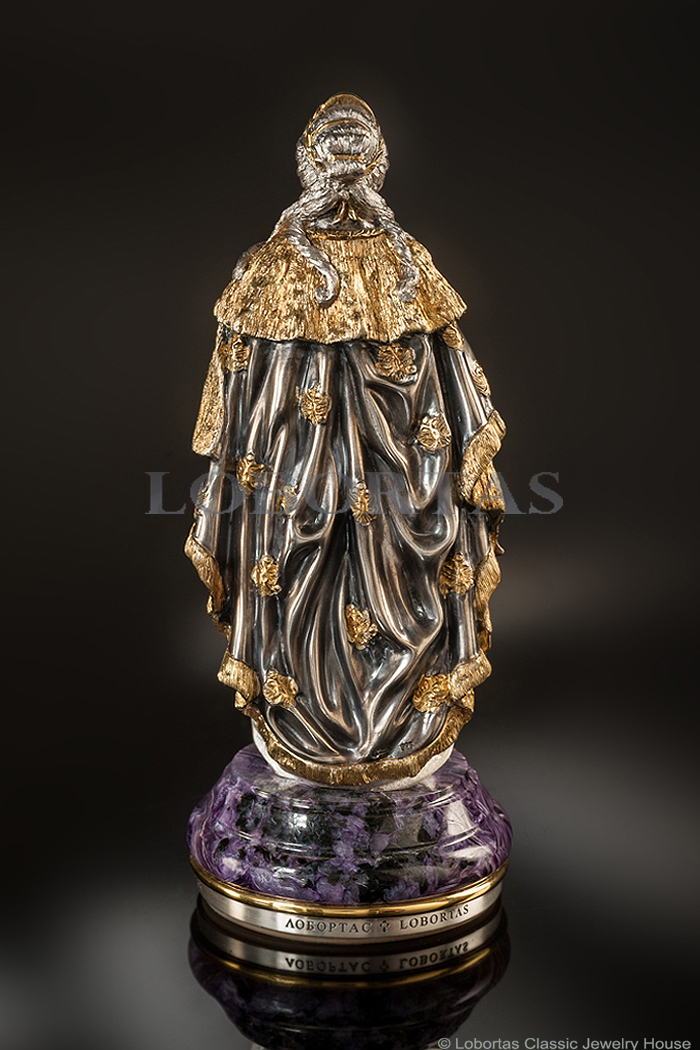