Tiffany. Dream in the Blue Box

For more than thirty years, women from all over the world have been dreaming to get a treasured ring in the turquoise box by Tiffany in the tremulous moment of their lives…

The history of Tiffany & Co. began 180 years ago, in 1837, at the 259 Broadway in New York, where two friends, Charles Lewis Tiffany and John Young, opened a stationery and haberdashery shop, calling it “Tiffany & Young”. 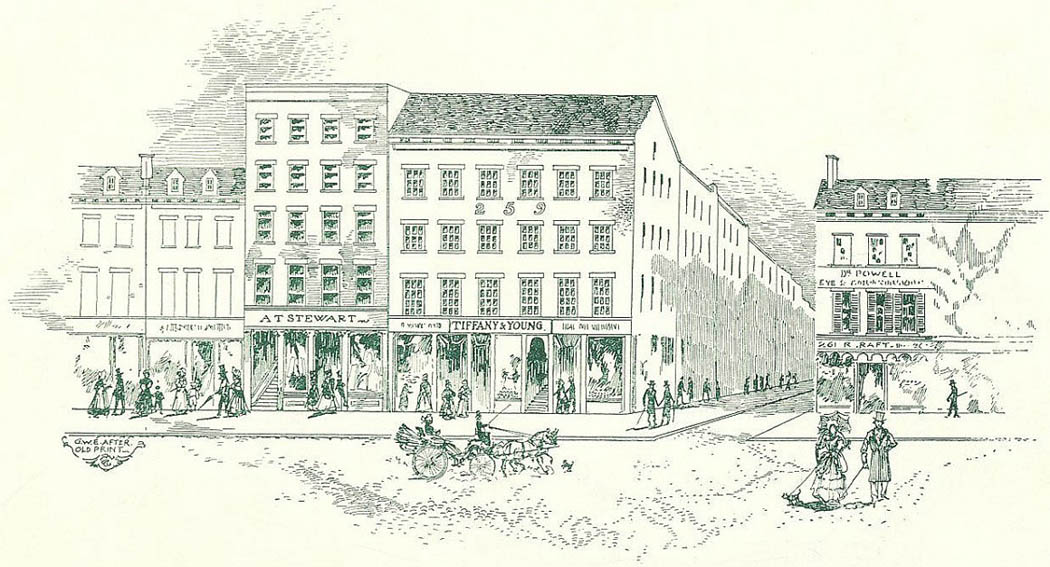 The first Tiffany shop at 259 Broadway.

Not as fast as they would like, though it steadily flourished. Two years later, the range of products expanded at the expense of products from glass, porcelain, cutlery, timepieces and jewelry purchased directly from ships at ports of New York and nearby coastal towns. That enabled to beat the competition markedly. 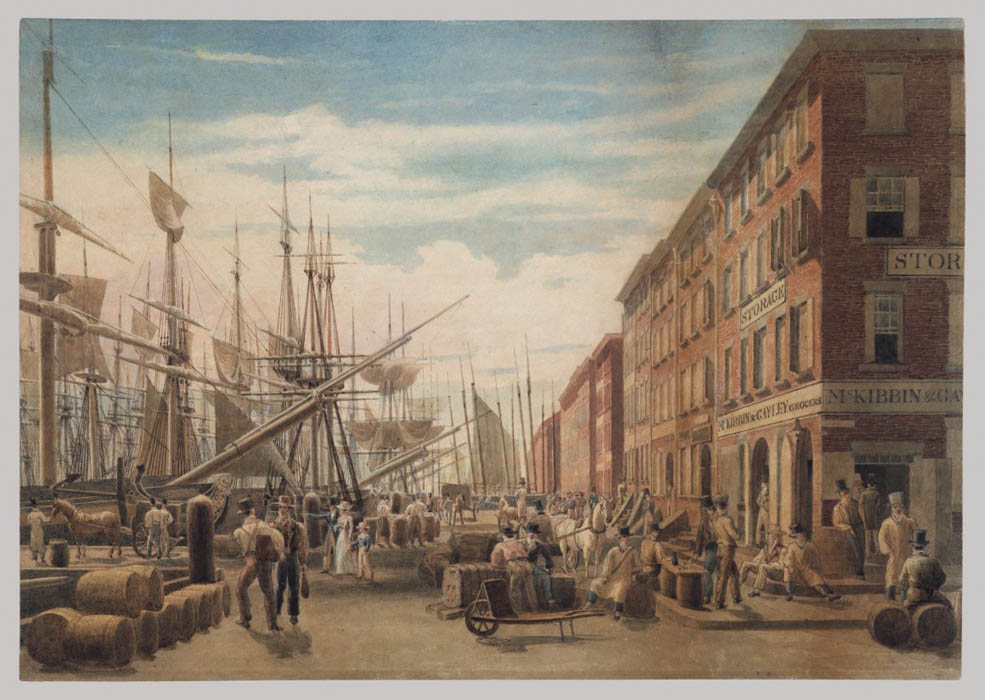 In 1841, businessman J. L. Ellis joined the team, the company expanded and took on the name “Tiffany, Young & Ellis”. Cash investment of the new partner allowed the company to become the country’s best supplier of Bohemian glass and porcelain, to obtain deliveries of fashion accessories and fine perfumes directly from France. In the mid-1850s the company took a fateful decision, they started releasing their own jewelry. In this context, in 1845, Tiffany, Young & Ellis released its first annual catalogue, which could be ordered by mail. They called it “Blue Book”, which showed a full range of products offered in the store. 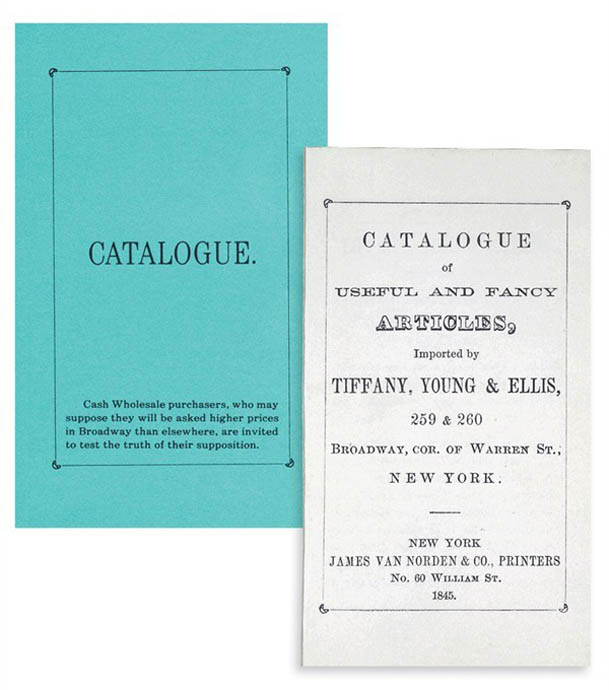 The first edition of the Tiffany Blue Book, 1845.

White and robin egg blue color, the corporate colors of the Tiffany & Co. jewelry house have remained unchanged up to this day. Charles Tiffany was the one who invented a signature style, which established the company forever. Each purchase is packaged in an elegant Tiffany Blue, light medium robin egg blue color, box with white satin ribbon. 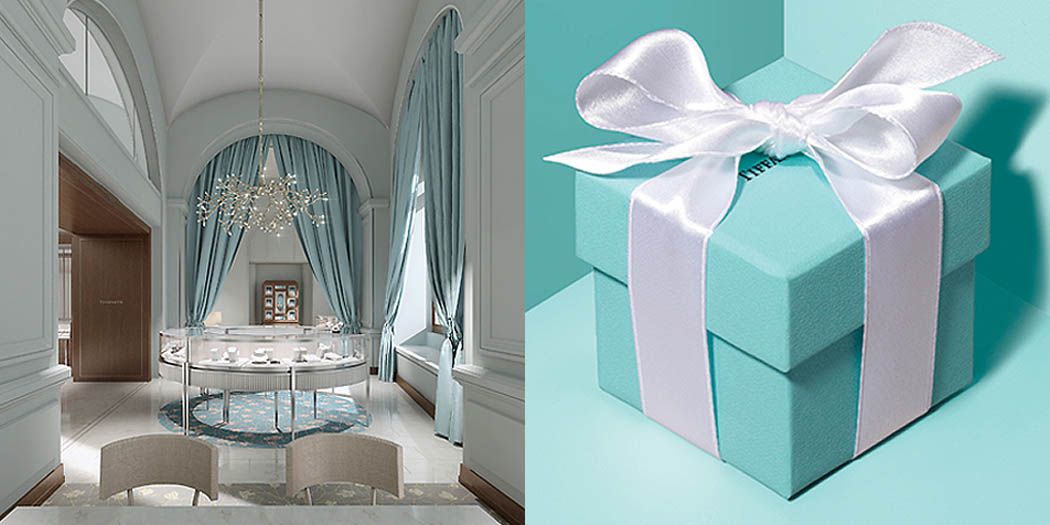 White and Tiffany blue color, the corporate colors of the Tiffany & Co.

In 1848, after the fall of Louis-Philippe, during another French Revolution, the Second Republic was proclaimed, and French aristocrats were seeking to exchange their jewelry for cash while fleeing from political persecution. Despite the huge risks, companions took to decide that their company would be responsible for the sales of diamonds. Young was promptly placed in Paris, where he profitably purchased a lot of jewelry for the company. In the shortest time possible, jewels with diamonds of high quality appeared on the counter of the Broadway store. Having assessed the situation, Charles Tiffany with companions started to buy up large diamonds and precious stones, making them the firm’s indispensable goods, which were the first truly valuable collector’s stones in America. 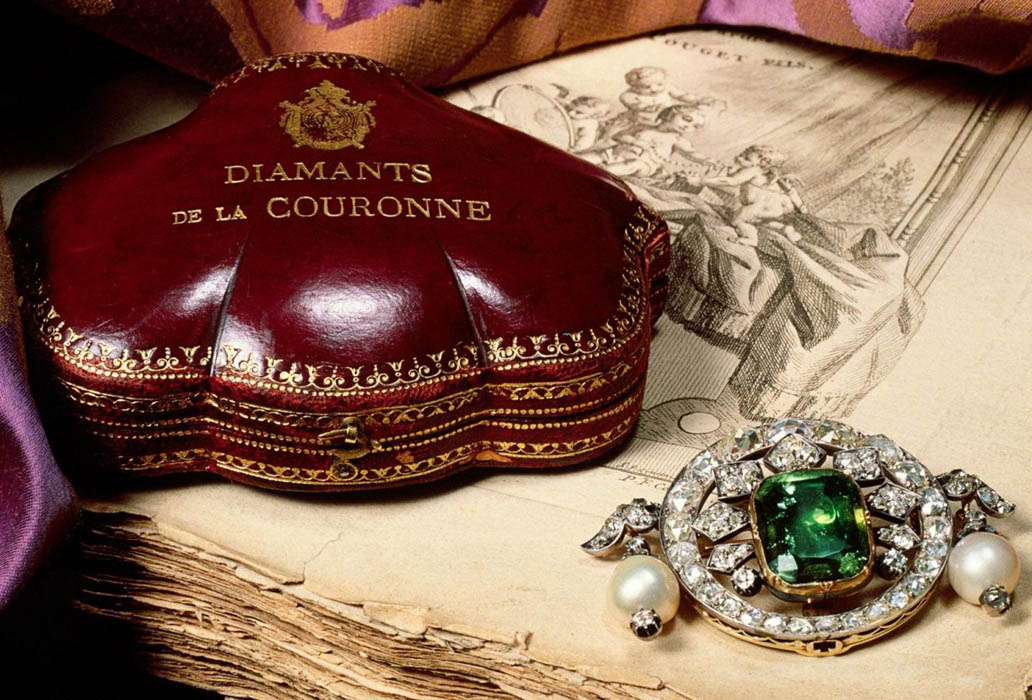 Brooch with an emerald, diamonds and pearls of Tiffany royal jewelry purchased in France in 1887.

By 1850, the company “Tiffany, Young & Ellis” had opened several jewelry shops. To meet the demand of society for silver goods, Charles Tiffany signed exclusive contract with John C. Moore, the famous silversmith of New York, to supply sterling silver for the company. He was commissioned to make silver equal to English Sterling (92.5% pure silver and 7.5% other metals). “Tiffany, Young & Ellis” was the first among American jewelry companies who used metal of such quality, adopted as a state standard by the decision of the Congress of United States in 1852. 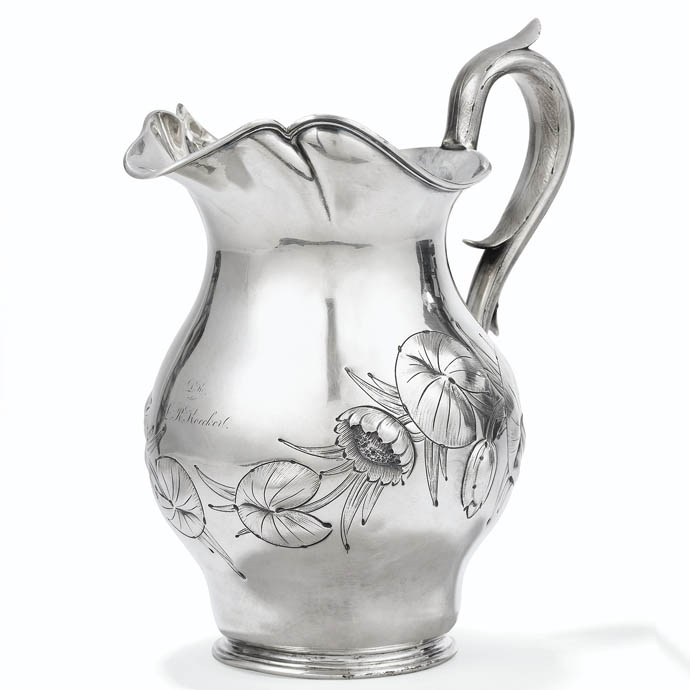 Also in 1850, the company “Tiffany, Reed & Co.” opened their first shop in at 79 Rue Richelieu, Paris. Gideon F. T. Reed became the partner of Tiffany with the French side. 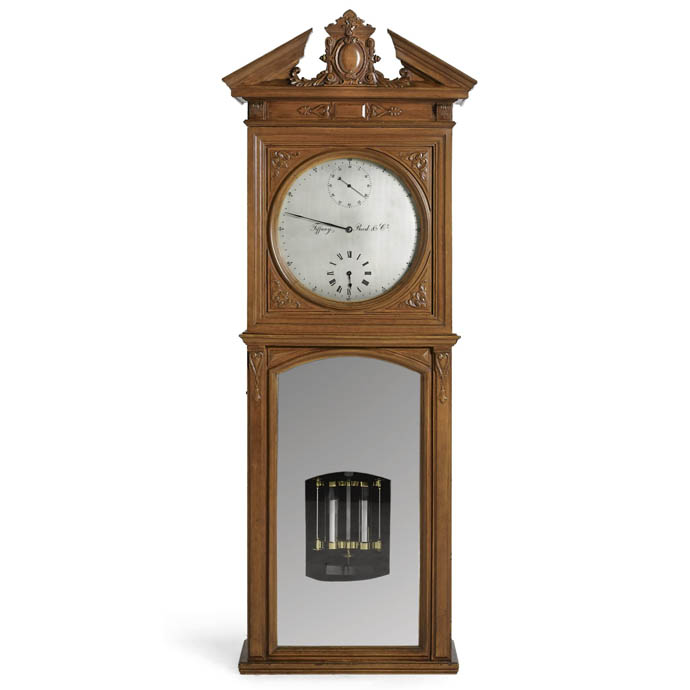 In 1853, Charles Lewis Tiffany bought up his companion’s shares and became the sole owner of the business, renamed the company to “Tiffany & Co.” and moved to 550 Broadway. 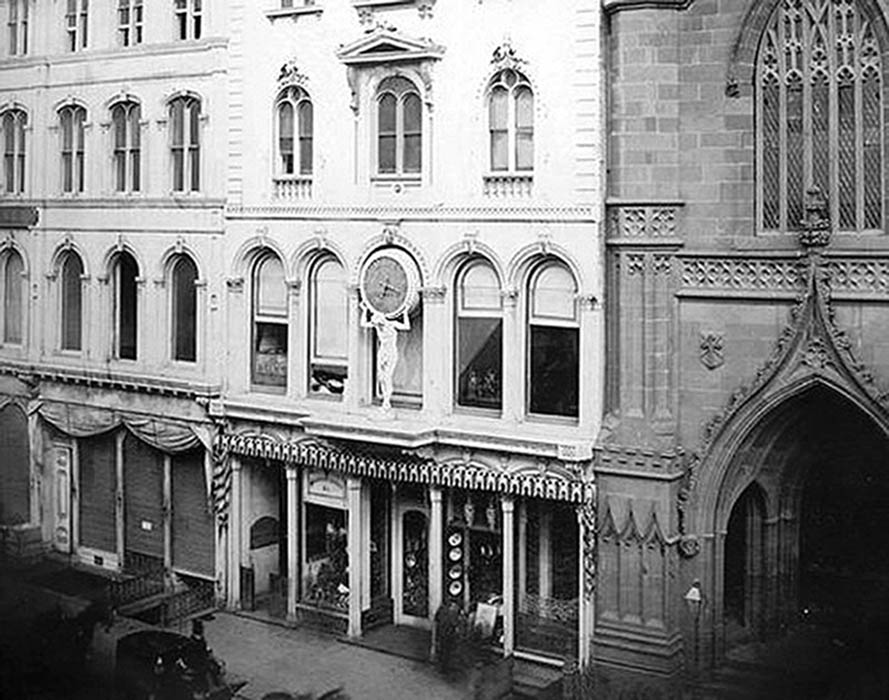 The symbol of the new countdown for a company was a majestic sculpture representing mythological hero Atlas, who supported clock instead of heavens on his shoulders, installed above the main entrance to the store. The sculpture was created by the renowned woodcarver H. F. Metzler, the craftsman making carved figureheads found at the prow of ships.

Tiffany & Co. accentuated producing and selling of their own products. Tiffany attracted the most talented jewelers of that time, which created a lot of simple objects that are available to consumers with average incomes, and collectible things, which are now exhibited in museums. 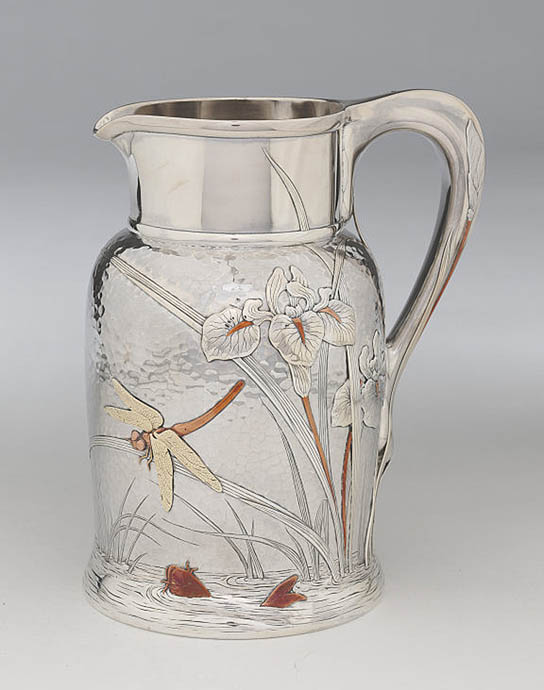 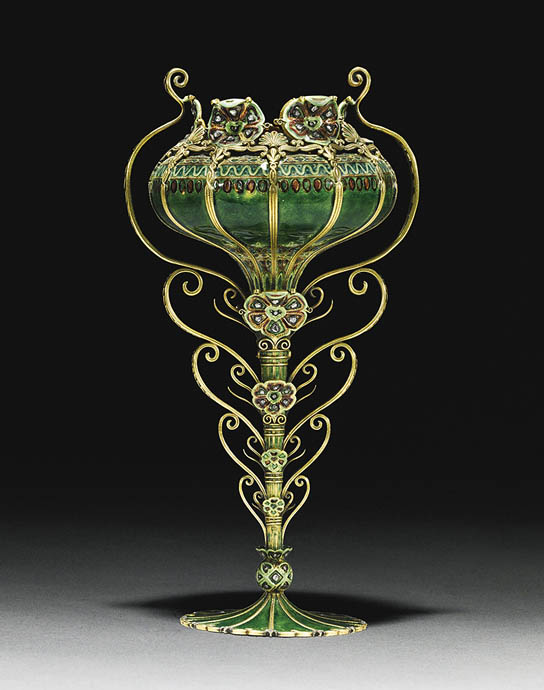 In 1860, “Tiffany & Co. executed an order for Race Course Association, manufactured Woodlawn Vase, the world’s most elegant jockey cup, the trophy awarded to this day at the Pimlico Race Course in Baltimore. 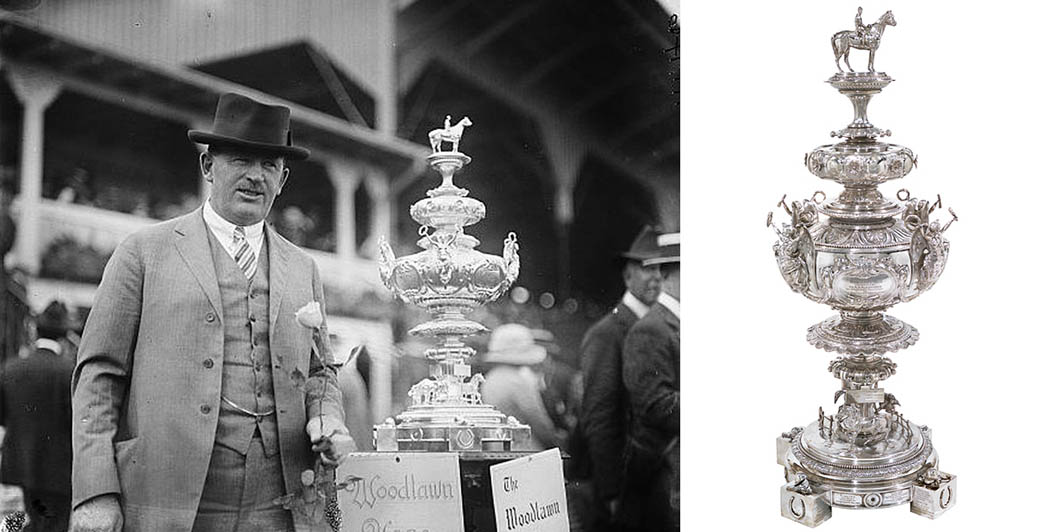 As you know, there is no greater good luck for any Jewelry House than the recognition of the country’s top officials. The very first senior buyer was American President Abraham Lincoln, the one who bought from Charles Tiffany a part of the jewelry set for his wife Mary Todd Lincoln, having confined himself to necklace and bracelets of fine pearls and yellow gold, in which she appeared before the audience at the inauguration ceremony in 1861. 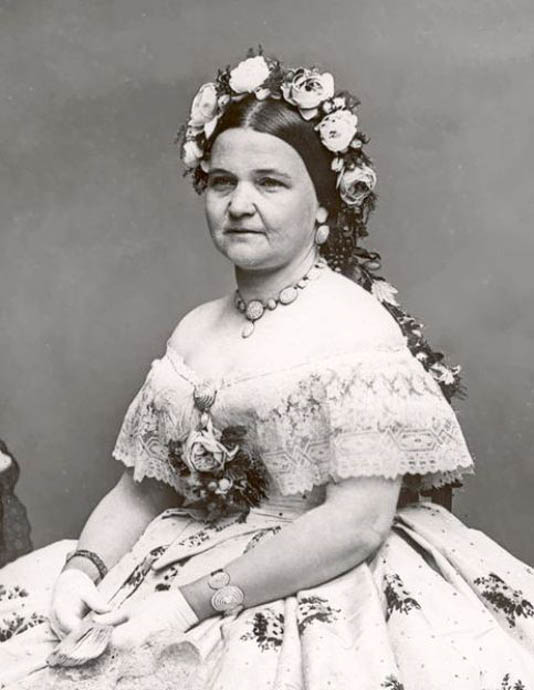 Mary Todd Lincoln in the Pearl jewelry set from Tiffany

The jewelry set that originally consisted of two identical bracelets, earrings, a brooch and a big corsage piece of jewelry, was the main exhibit of “Tiffany & Co.” and was displayed in the Crystal Palace at the New York International Exhibition of 1855. After that event, Tiffany & Co. enjoyed great popularity among the general authorities. 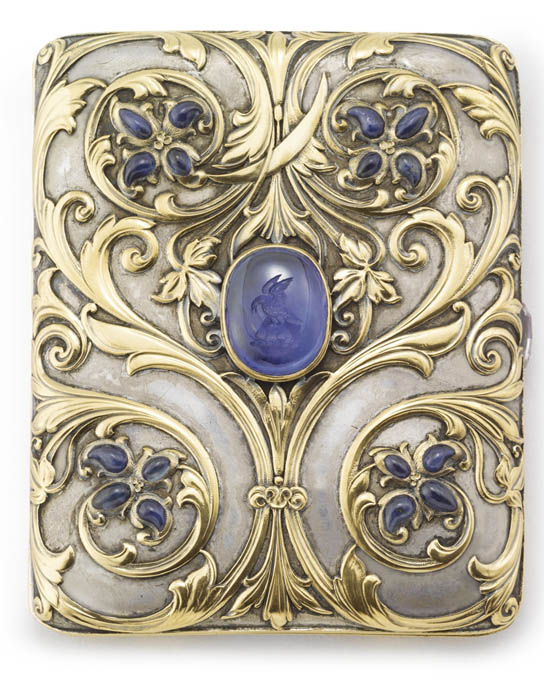 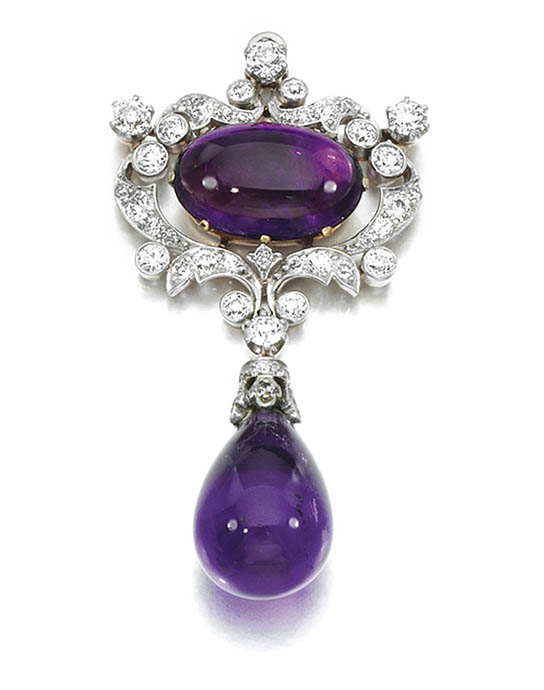 The civil war, burst out in 1861, did not adversely affect the business of Tiffany & Co. Charles Tiffany was not only a successful businessman, but also a great patriot. The company created the center of supply and sale of firearms and ammunition from abroad to northerners. Tiffany & Co. produced flags, surgical instruments for the army, they got Government contracts to manufacture rapiers and ceremonial swords with precious stones for Admiral Farragut, generals Sherman and Grant, and the higher ranks of the United States Army. 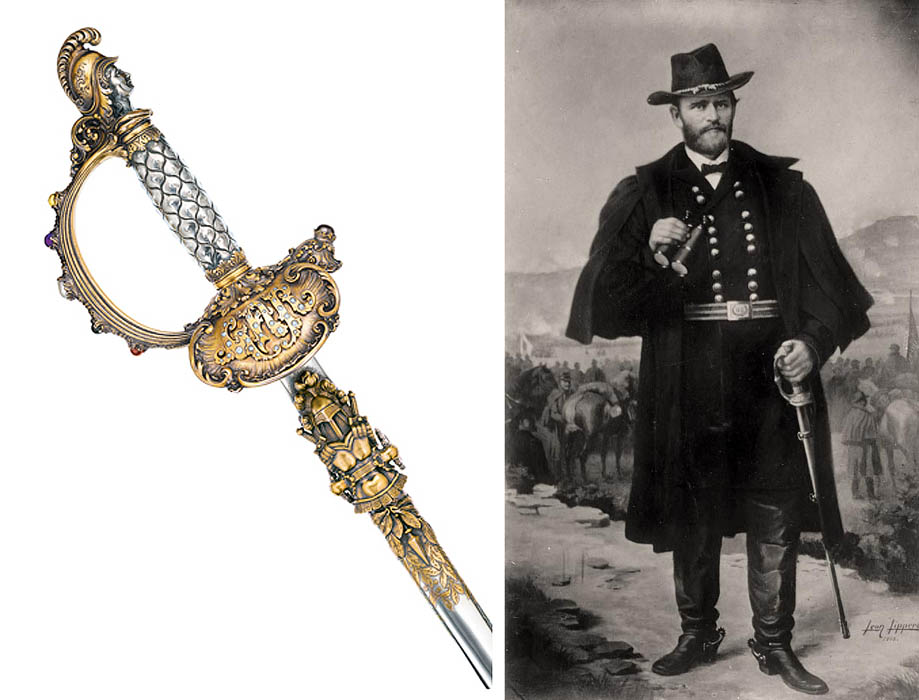 Rapier made by Tiffany & Co. for General Ulysses Simpson Grant.

In 1868, the Tiffany & Co. branch opened in London, and 1870 marked the opening of a new store on Union Square in Manhattan. Tiffany & Co. spent half a million dollars, an incredible amount then, to equip it with necessary facilities. That gorgeous shop was described by The New York Times as a “palace of jewels”. 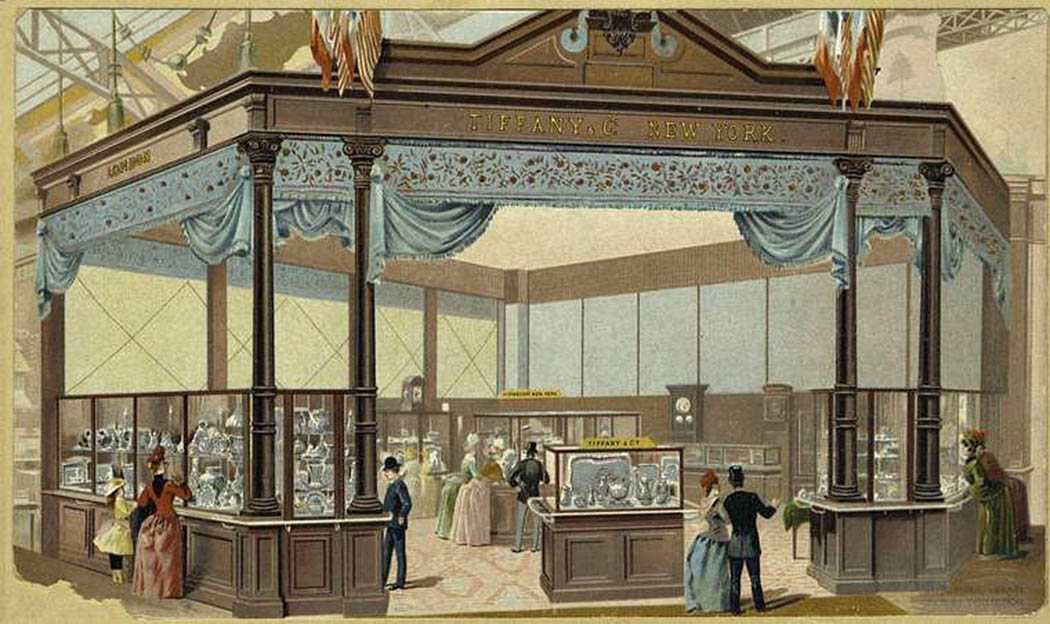 Tiffany exhibition stand. The second half of the 19th century.

In 1868, the Tiffany & Co. branch opened in London, and 1870 marked the opening of a new store on Union Square in Manhattan. Tiffany & Co. spent half a million dollars, an incredible amount then, to equip it with necessary facilities. That gorgeous shop was described by The New York Times as a “Palace of Jewels”. 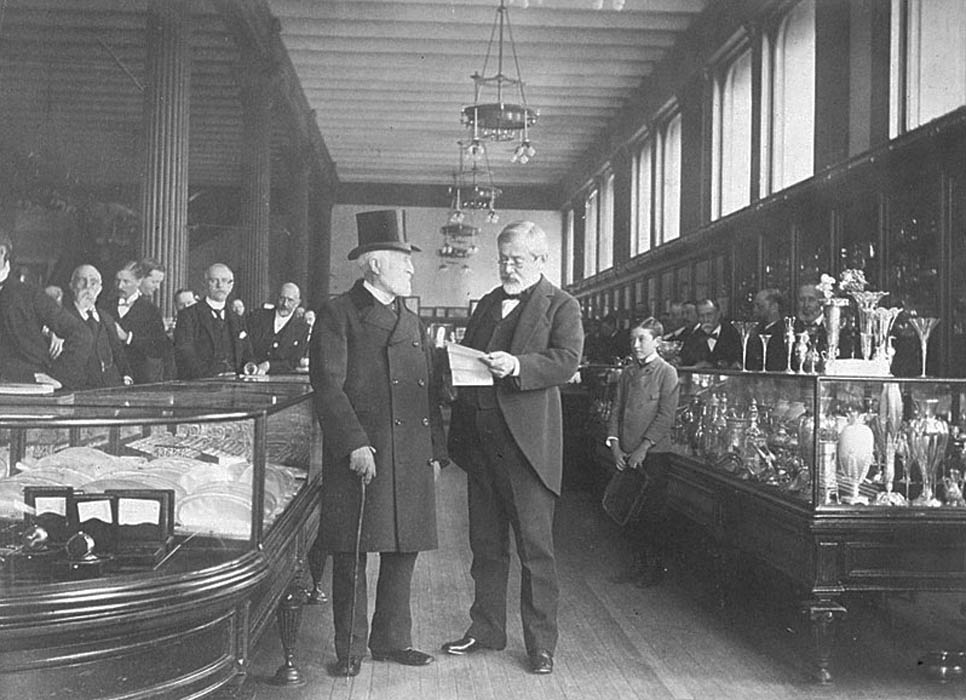 Charles Lewis Tiffany (left) at the store on Union Square and Charles T. Cook in 1887.

In 1871, the company “Tiffany & Co.” produced a collection of silverware “Audubon” in style of Japanese graphic art of the 19th century. That was a best seller among silverware sets, manufactured by the company. 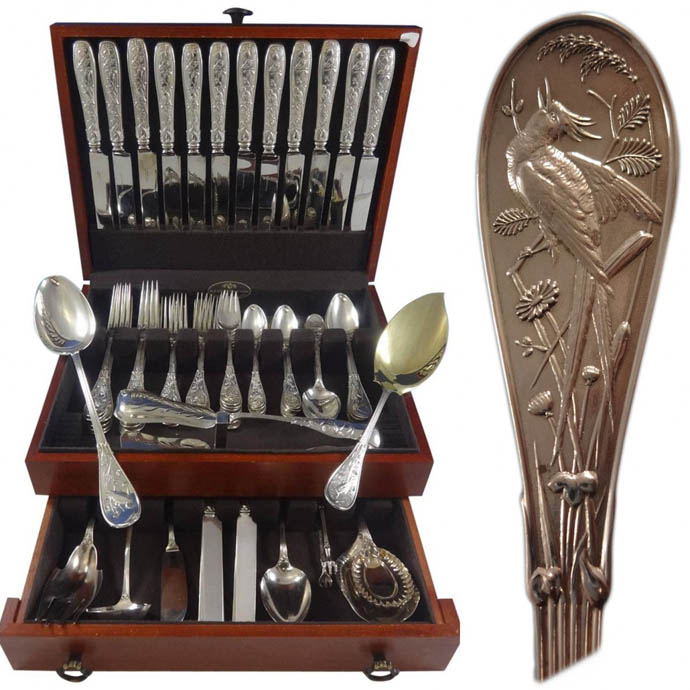 Museums of the world started to buy Charles Tiffany’s products for permanent display. In 1873, Boston Museum of Fine Arts purchased copper, silver and blackened pitchers by Tiffany & Co. That purchase was the history’s first event, when American silver was an exhibit of one of the leading museums in the world. 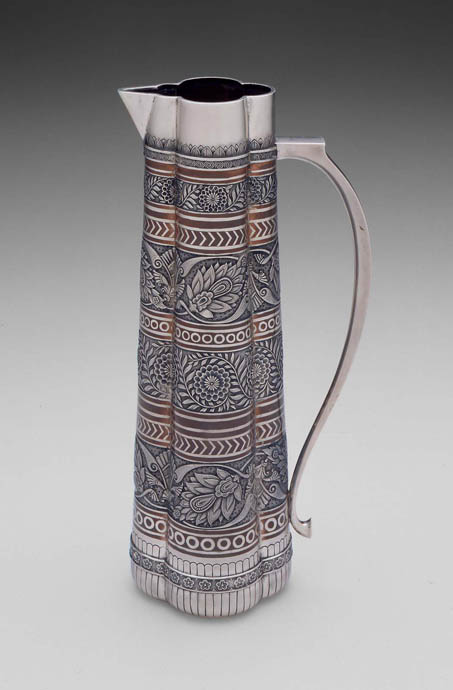 Constant innovations allowed company “Tiffany & Co. to be always up-to-date, not forgetting, of course, the words of its founder: “good design is good business”.

Exploring the legacy of the designers of Tiffany & Co., the artisans of Lobortas Classic Jewelry House create new unique works in the field of jewelry and applied arts that are a model of good taste and highest quality, continuing the trade of great jewelers and reflecting the era of the 21st century.