Annals of the Van Cleef & Arpels Jewellery House is a beautiful story of family happiness, passion and magic, which has had an incredible impact on the world of jewelry. The story of Van Cleef & Arpels, one of the most romantic and mysterious brands throughout the history of global art jewelry, starts as a true fairy tale — with a luxurious wedding of Estelle Arpels, daughter of the precious stone trader, with Alfred van Cleef, the son of a diamond merchant from Amsterdam. They got married in 1896. The union promised to be harmonious and mutually beneficial. The newlyweds had a lot in common: an inexhaustible enthusiasm, inquisitive mind of explorers, homage to strong family ties and love for precious stones. Their creative impulse led to the founding of Van Cleef & Arpels. 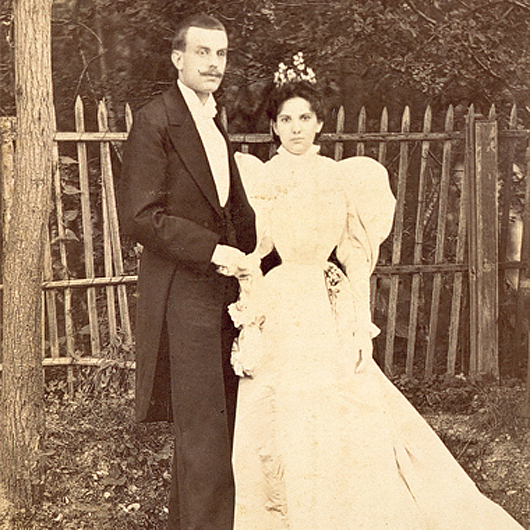 In 1906, Alfred opened his business with Charles, Estelle's brother, in Paris at the 22 Place Vendôme. A talented businessman, Charles Arpels, took control of the Parisian boutique. Two years later, Julien, Estelle's second brother, and in 1912, her third brother, Louis, both experienced experts on gems, came to their team. Everyone kept himself busy in the jewelry house: Estelle kept the books and was a great analyst, Alfred and Charles were responsible for commerce, and the rest of the family – for the impeccable quality of the stones. By creating their family business, Van Cleef & Arpels painstakingly formed their corporate identity and a particular manner of execution of fine jewelry, which would later become the recognizable and unique. This company was united in not only family ties, but also phenomenal affection for precious materials. The Arpels collected unique stones worldwide: the cleanest, the rarest, most beautiful, and then turned them into works of artistic jewelry. Thanks to their diligence, the name Van Cleef & Arpels became consistently associated with fine jewelry creations worldwide in the following years. The Jewelry House has gained universal recognition. 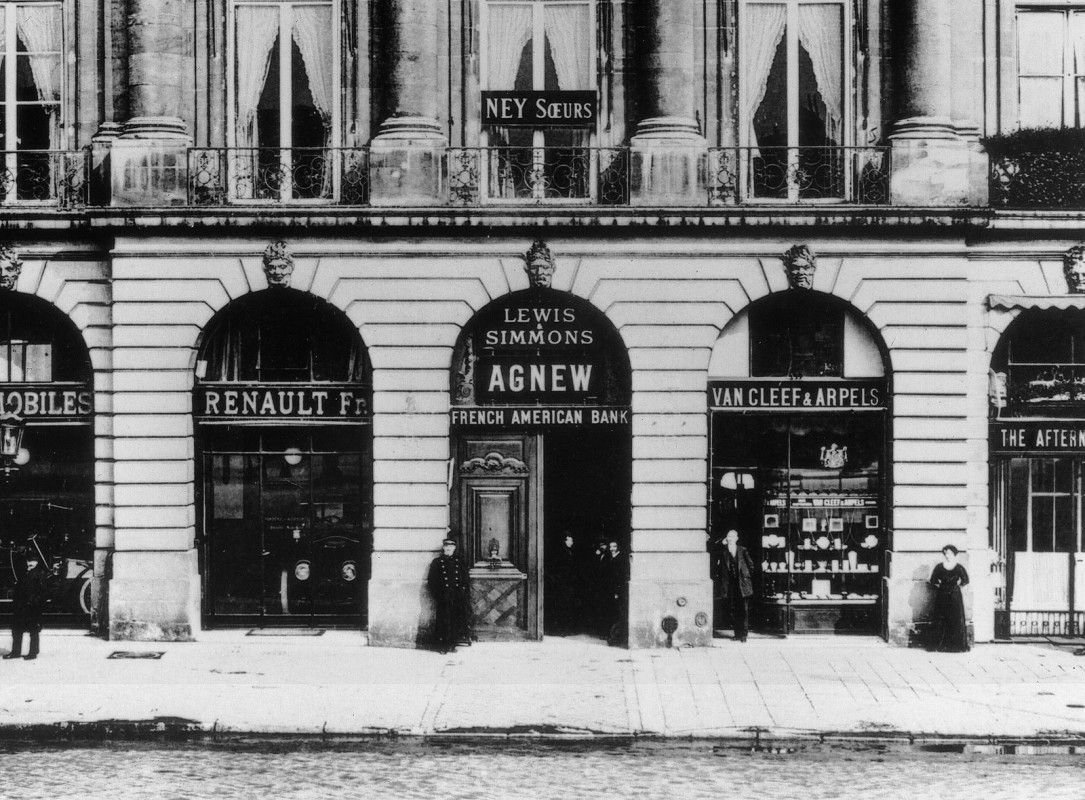 Two persons played a special role to develop a classy style of Van Cleef & Arpels: Alfred van Cleef's daughter Renée Puissant, who led the company’s Department of Art from 1926 to 1942 year, and outstanding designer René Sim Lacaze. All the years of fruitful cooperation they chose natural objects as the main source of inspiration and the nature inhaled life and energy into all of their creations. Colorful butterflies, transparent dragonflies and unfading flowers in subtle shades of feelings, caught in a network of fine stylized lines. International expansion started in the 1930s. Van Cleef & Arpels decided that it was easier not to follow the fashion, but to create it themselves. It was an ideological breakthrough and predicted success. In 1930, at the ball, Charles Arpels noticed how socialite millionaire Florence Jay Gould was hiding lipstick in the pewter box. After that he designed and created a precious pouch for cosmetics. It was a sensation. Minaudière is a make up bag, ladies' necessaire with precious materials, became one of the most successful inventions of the House and an indispensable attribute of the women's evening dresses. 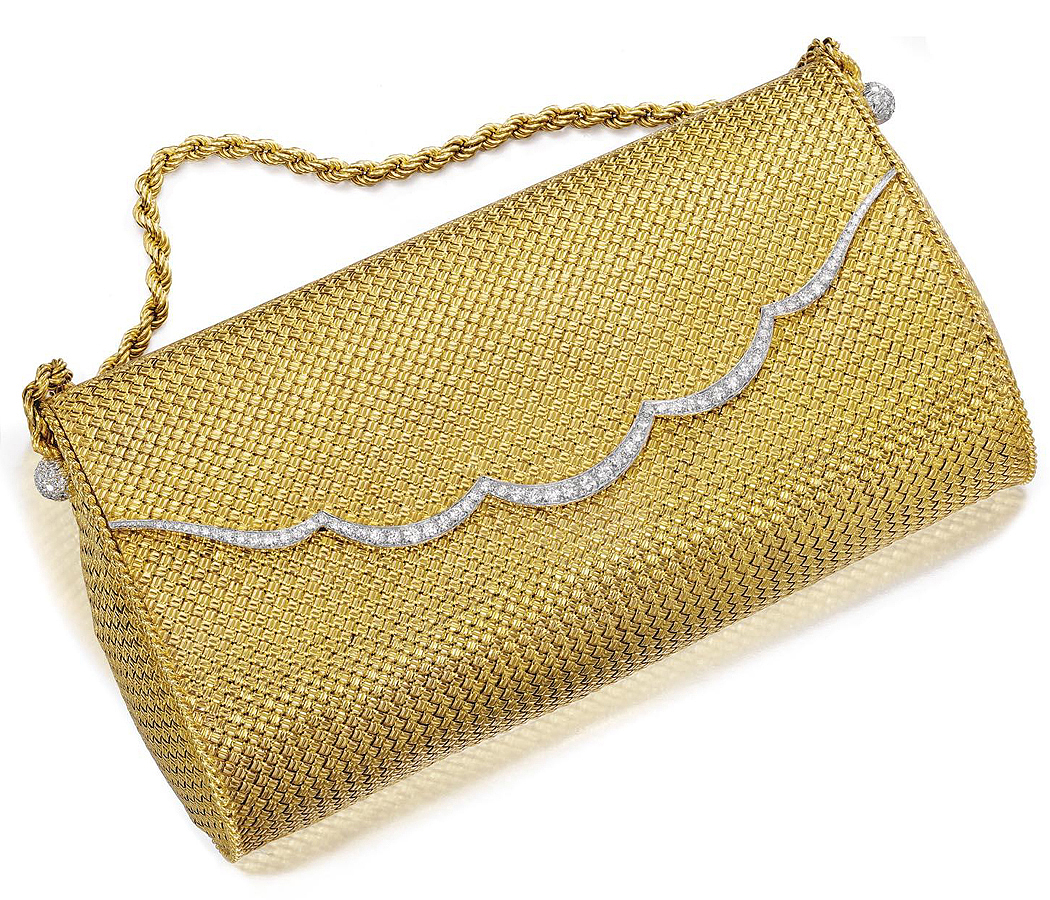 The style of Van Cleef & Arpels was definitively established after revolutionary innovation, the invisible stone-setting, which was developed in 1933 and was called the Mystery Setting. Magic technique of invisible setting was under control of the most skillful jewelers only. Its idea was to make some grooves on lateral surfaces of the stone with rectangular or square cut, at the expense of which the stone was set. This design allowed them to get completely impeccable stone, the setting of which was absolutely imperceptible in front of the product. The most commonly the invisible setting was applied to the pieces with rubies and sapphires, helping them to emphasize the stone shining. Later another transformer necklace "Zip" was born. It was made to order of Wallis Simpson, the future Duchess of Windsor.

In 1934, Van Cleef & Arpels created a unique bracelet with honeycomb décor, which gained ground among fans of the brand. In 1936, owing to the future Duchess of Windsor, another history-making piece of jewelry, the Cadenas ladies' watch, came into the world. Van Cleef & Arpels invented the bracelet with concealed face, distinquishable by its owner only. Invention allowed to save the reputation of a woman, as it considered to be mauvais ton for a woman to wear a wristwatch in 1920-1930s. The prejudice has remained in the past, and bracelet with hidden face has been a popular and sought-after female accessory to this day.

Changing the view on the limits of the possible became one of the keynotes of Van Cleef & Arpels. The strategy of Van Cleef & Arpels was largely built on technological innovation. Ideas of new jewelry forms captured the imagination of the Van Cleef & Arpels’s artisans. In 1938, a completely new concept of the Passe-Partout jewelry, allowing the use of the base chain with brooch-flower as necklace, belt, brooch or bracelet. 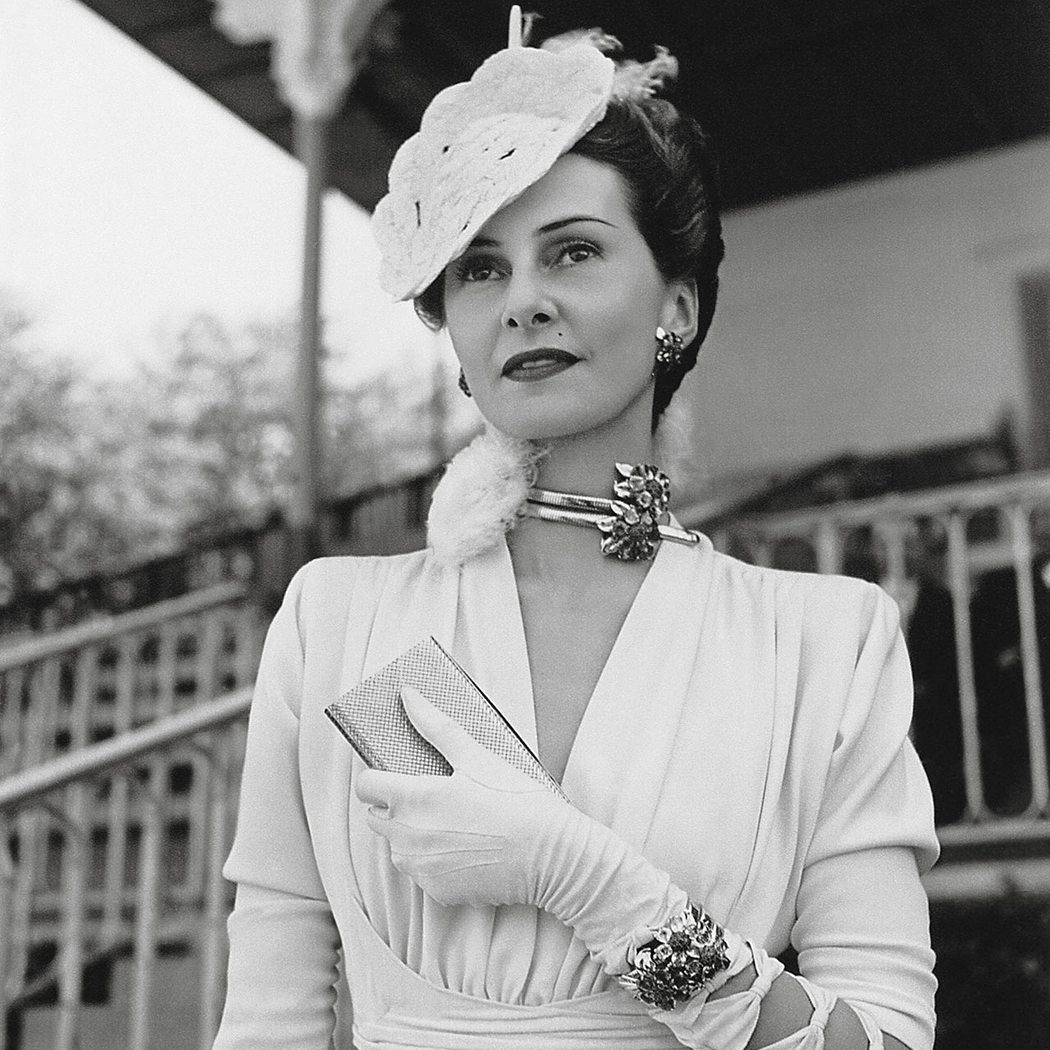 In the history of outstanding customers' unusual orders, the worthy place is occupied by cat's collar of platinum and diamonds, the bracelet inside the chocolate Easter egg, two golden tongue scrapers, made for the maharani of Baroda Principality, bottle stand of yellow gold with the Pepsi-Cola logo and even gold tea infuser. The most exclusive order was made by one maharajah: aquarium for forest frog made of precious materials, equipped with a small golden ladder. Happy owner of the aquarium could predict the weather seeing how the frog was climbing the ladder.

Gradually, the reins of Van Cleef & Arpels were passed to second generation of the van Cleefs and the Arpels. Part of the workshops moved to the USA. First boutique in New York was opened in 1939 by Pierre Arpels, now it is at the 744 Fifth Avenue; several boutiques were opened worldwide as well. Van Cleef & Arpels becomes the most exquisite jewelry brand. Fiery passion for nature of jewels kept being organically intertwined with technical innovations of Van Cleef & Arpels in their jewelry. 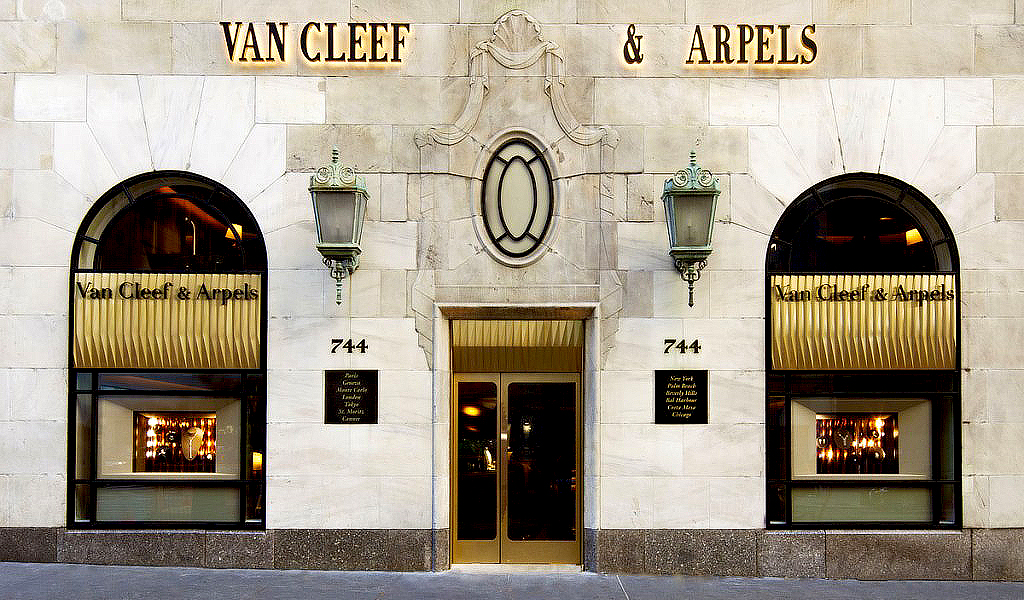 Beautiful pieces of jewelry have the "Russian trace" as well. Once having come under the magic of Dyagilev's "Russian Seasons" in Paris, Van Cleef & Arpels became the passionate fans of the Russian Ballet. And from that moment the images of Russian classical ballet school became the inspiration and model for the most collections of French Jewelry House for many years. And in 1960, an agitated person went into the Van Cleef & Arpels's showroom at the Fifth Avenue. He emotionally demanded a meeting with the owner of the jewelry company, thereby having frightened the administrator girl. The strange guest was received immediately and a great choreographer appeared before astonished looks of the leadership. Admiring the products on display, George Balanchine (born Giorgi Melitonovich Balanchivadze) came up with the theme of brand new ballet and invited the company to participate in the project. The proposition was accepted, and in 1967 the "Jewels" ballet premièred. It consists of three scenes: "Emeralds" with the Fauré's music, Rubies with the music of Stravinsky and "Diamonds" with the music by Tchaikovsky. At the same, a new jewelry collection "Ballet" by Van Cleef & Arpels was born. It was a sensation. 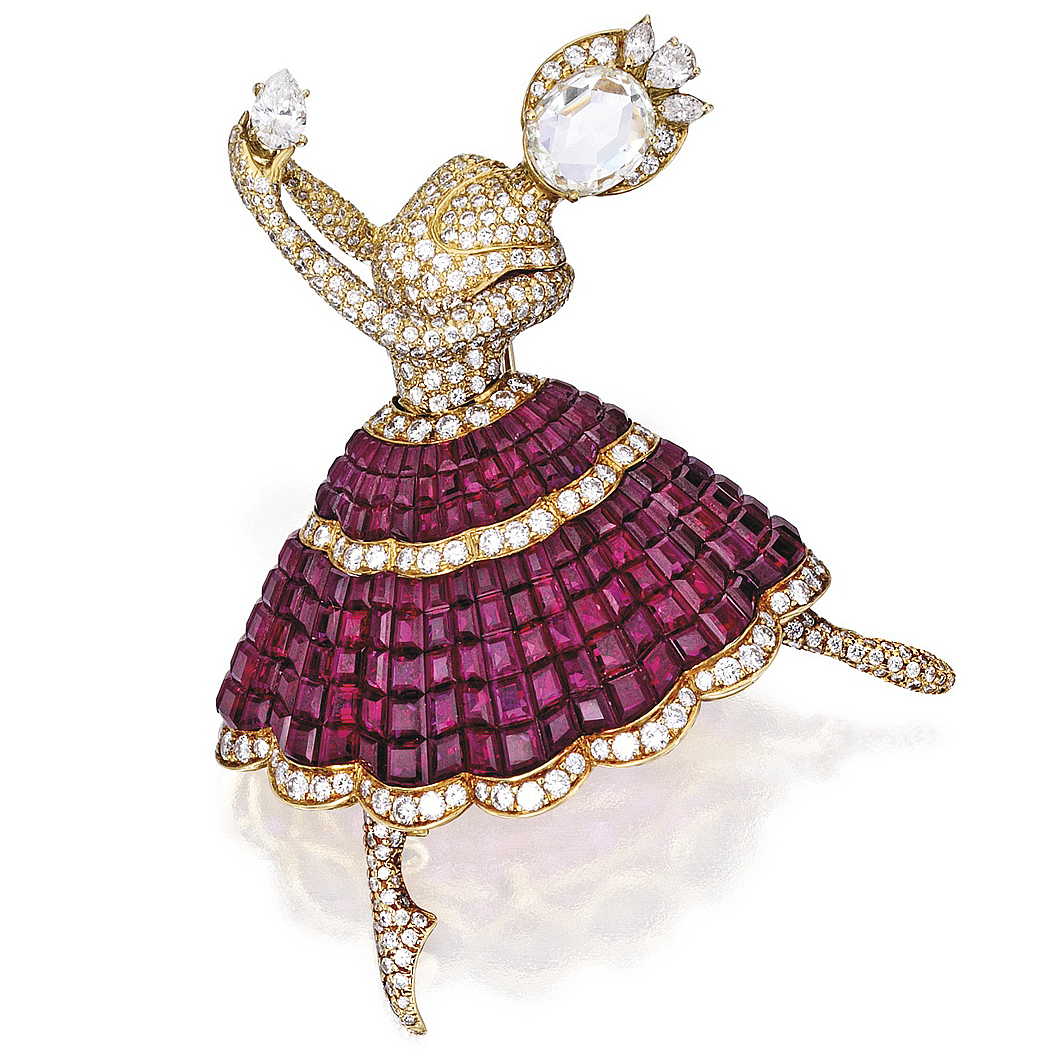 Today the Van Cleef & Arpels jewelry house remains one of the most prestigious and best-selling brands in the world of luxury. Its extraordinary collections are extremely popular among people of different ages and statuses. In addition, Van Cleef & Arpels keeps delighting its fans with regular innovations and inventions. 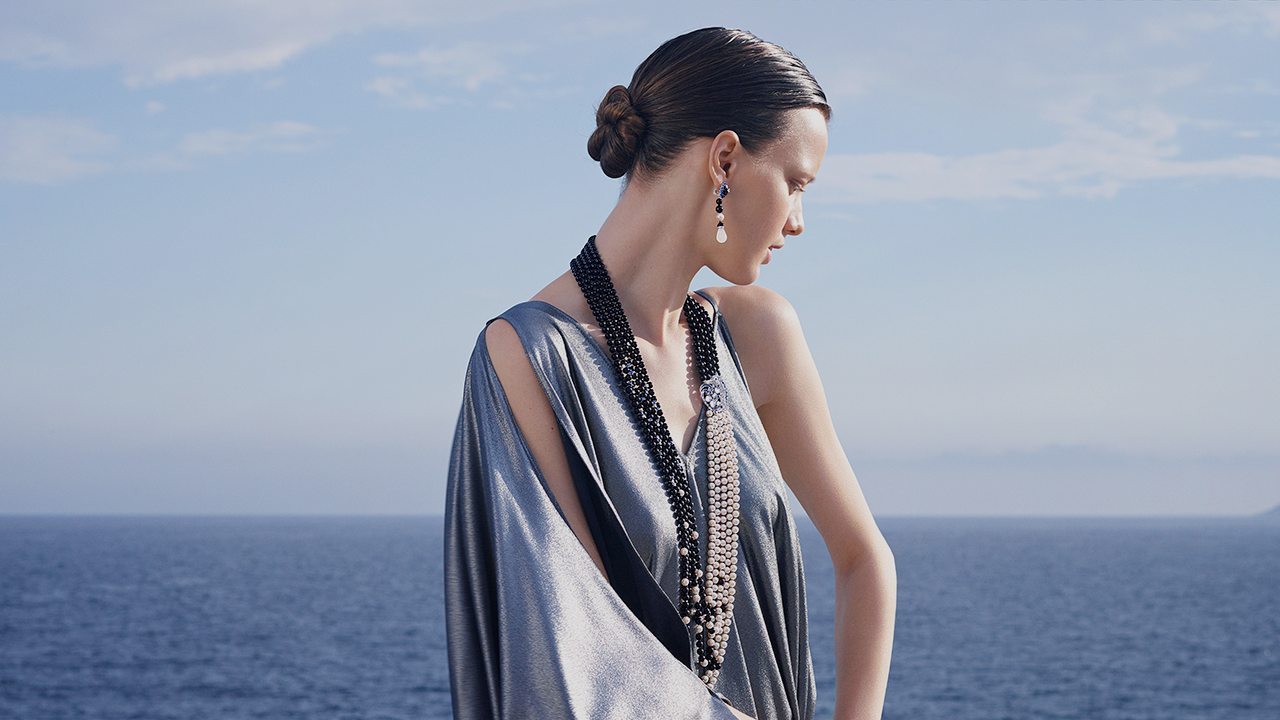 Only the process of making the masterpieces of jewelry remains the same. The most exceptional stones, which have slept in the depths of the Earth for millions of years, pass through dozens of careful hands. These are the hands of 70 artisans, who work in the Van Cleef & Arpels's studio nearby the Parisian boutique. In addition to the specialists that are commonly found in the staff of the jewelry workshop, here there is an artisan that makes models of future products. These original 3D sketches are the next step after paper drawings. Van Cleef & Arpels is the only company on the Place Vendôme, which makes such models from pewter and crystal. The model gives a good idea of how the jewel will look like, and resolves the latest technical and aesthetic deficiencies of the project. When the model is approved by the leadership, jewelers begin to make the base of gold or platinum for a piece. Then cutters of the workshop prepare stones for setting... 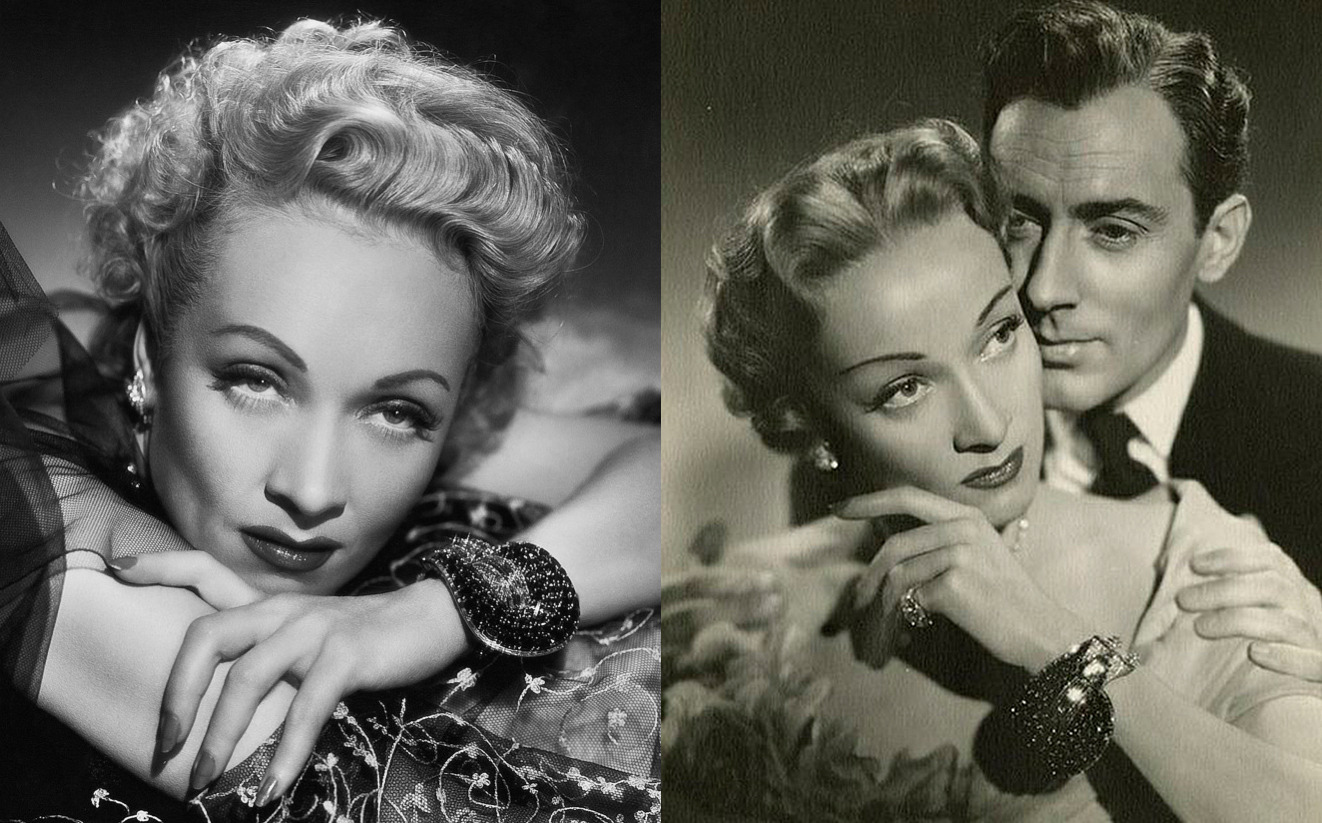 Uniqueness and exclusivity, stunning design of jewelry crafted by the House of Lobortas is obtained not only owing to the creativity and dedication of artisans and due to the fact that the client's imagination manages the process of new jewelry creation. 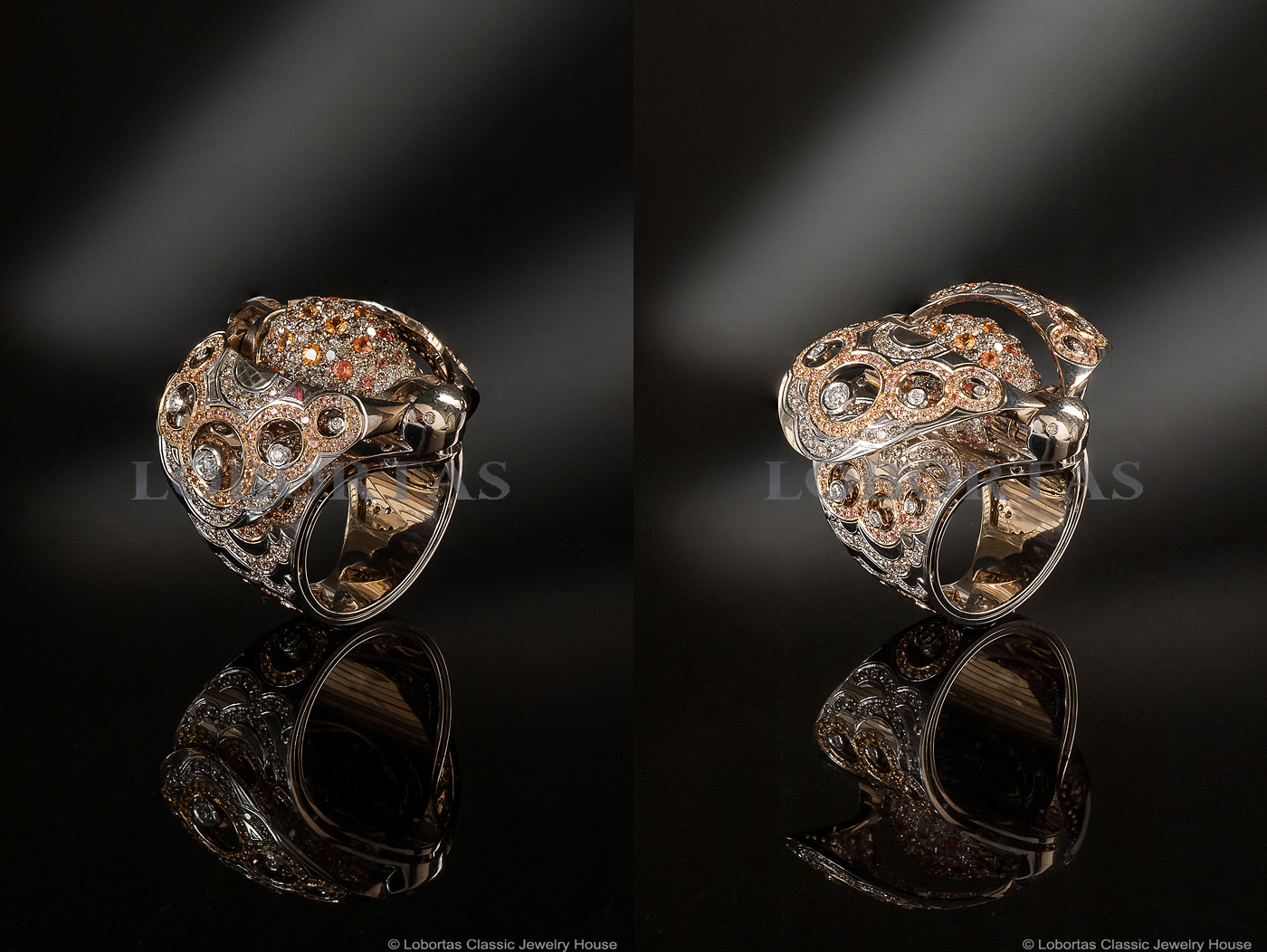