Raymond Yard won the eternal glory owing to his topical and certainly very expensive jests. In 1929, at the peak of alcohol being banned, Raymond manufactured brooches, shaped as rabbit waiters. Those pieces were a kind of artisan’s protest against “dry law”, and the hallmark of Raymond Yard brand jewelry. 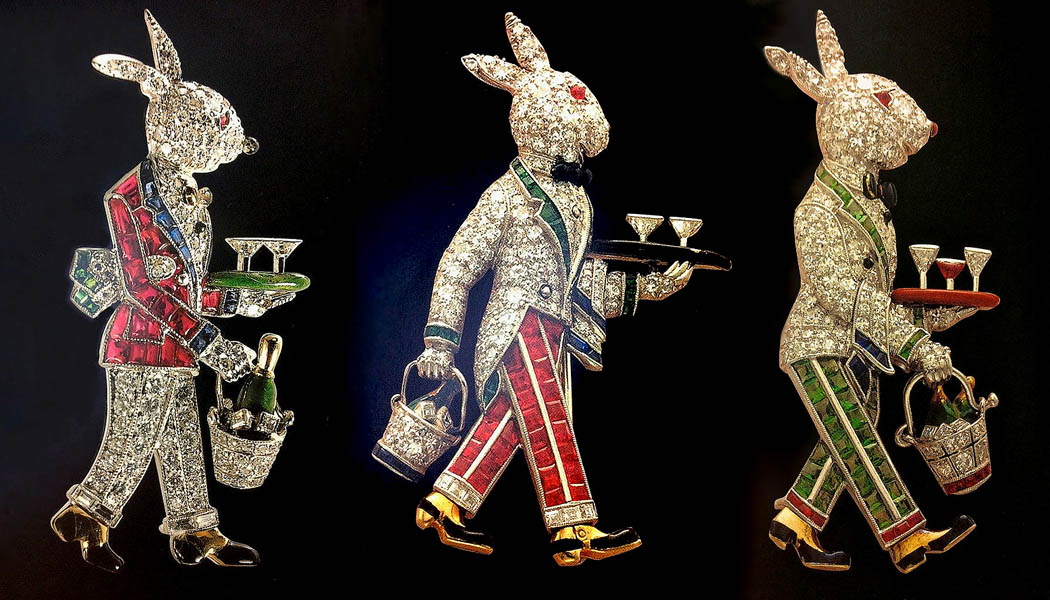 The life of Raymond Yard is a delightful whirlwind of controversy. He was born on 19 April 1885 in Montclair, New Jersey, in a poor family of a railroad conductor and reached the top of the jewelry business by having become a rich man.

Raymond started his jewelry career at the age of thirteen, in 1898, by having got the job of a doorman in one of the luxury jewelry stores of Marcus & Co. in New York. Getting three dollars a week, he opened the doors for people of high society, who one day would open the doors in the world of jewelry splendor for him. Four years later, Raymond moved to the Pearl Department. Young Yard absorbed knowledge quickly enough by studying various aspects of the jewelry industry, from production to sales. After 20 years of irreproachable service to Marcus & Co, Raymond Yard was the company’s most popular seller. 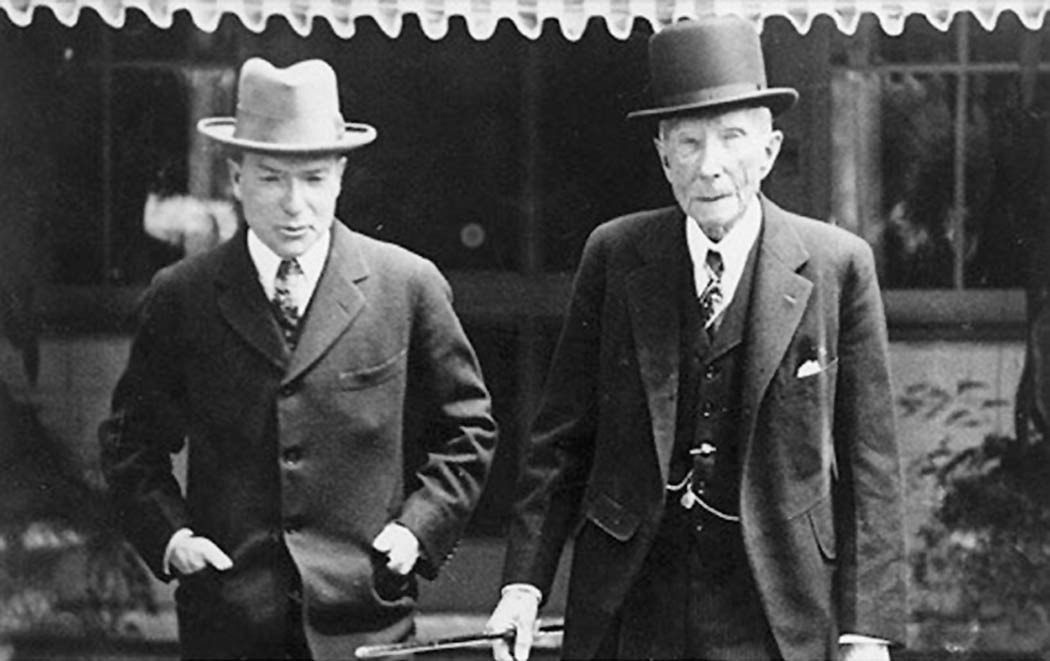 Sidereal hour came in 1922, when John D. Rockefeller Jr. makes him an offer, which was impossible to decline: if Yard decides to open his salon, Rockefeller will buy most of valuables, designed by him and will recommend Yards works to his friends.

At the same time, there were two more events changing the world of jewelry forever: the use of platinum in jewelry, allowing creating a complex design and flexible access to Kashmir sapphires. These two ingredients turned out to be necessary for the emergence of jewelry in the art deco style and the future success of Raymond Yard.

At the age of 37 years, Raymond Yard opened the Raymond Yard Jewelry House at 607 Fifth Avenue and aimed usage of high quality gemstones only and the finest platinum mountings in his works. 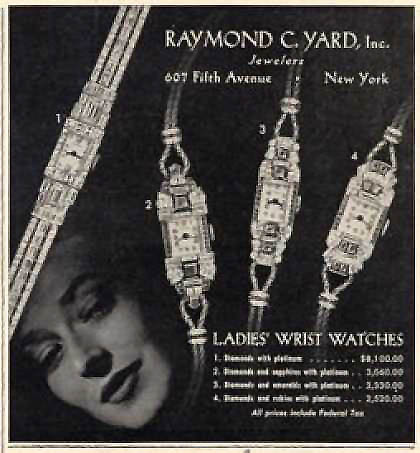 Rockefeller kept his word. Raymond Yard got his first personal jewelry order for Rockefeller’s wedding and coped with that task with stunning success.

Following the Rockefellers, the richest families of America as well as cinema stars became clients of the Raymond Yard Jewelry House. Family members of the Woolworths, the Vanderbilts, the Duponts, the Harrimans, the Flaglers as well as players Joan Crawford and Douglas Fairbanks became Raymond’s regular customers. 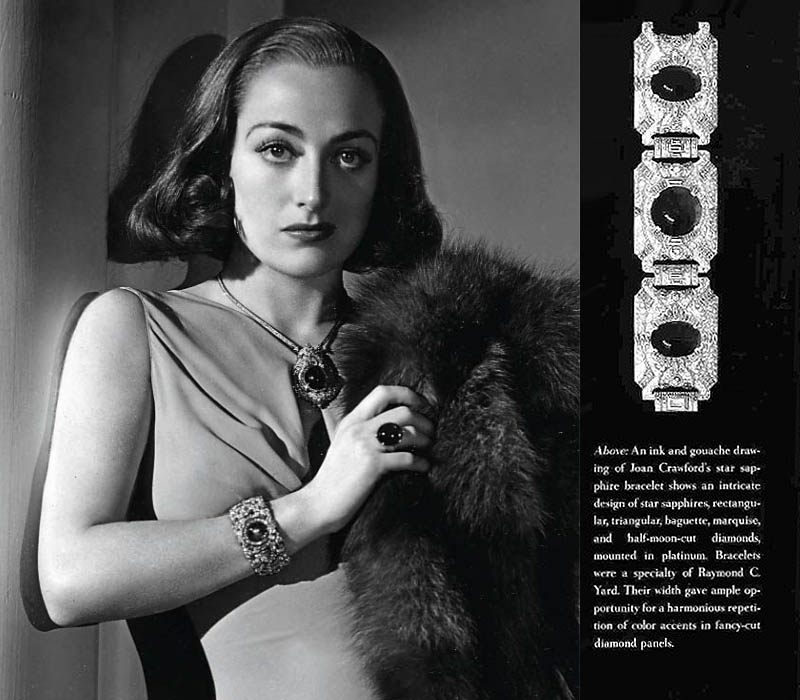 Impeccable honesty, prudence and perfectionism of Raymond Yard made wonders in the jewelry art of the time. Many of his clients were willing to wait long enough for their orders, while Raymond was looking for the perfect stone to complete the work. There is an example in the history of the Raymond Yard Jewelry House, where it took 10 years to find ideally chosen Eastern gems to create a unique necklaces.

Raymond was constantly experimenting, by designing jewelry with precious stones cut in different shapes. Due to this, the jewelry masterpieces by the Raymond Yard Jewelry House, designed in the art deco style, advantageously surpass jewelry works by the competitors and extol the pieces by Raymond Yard to the new level, unreachable by others. 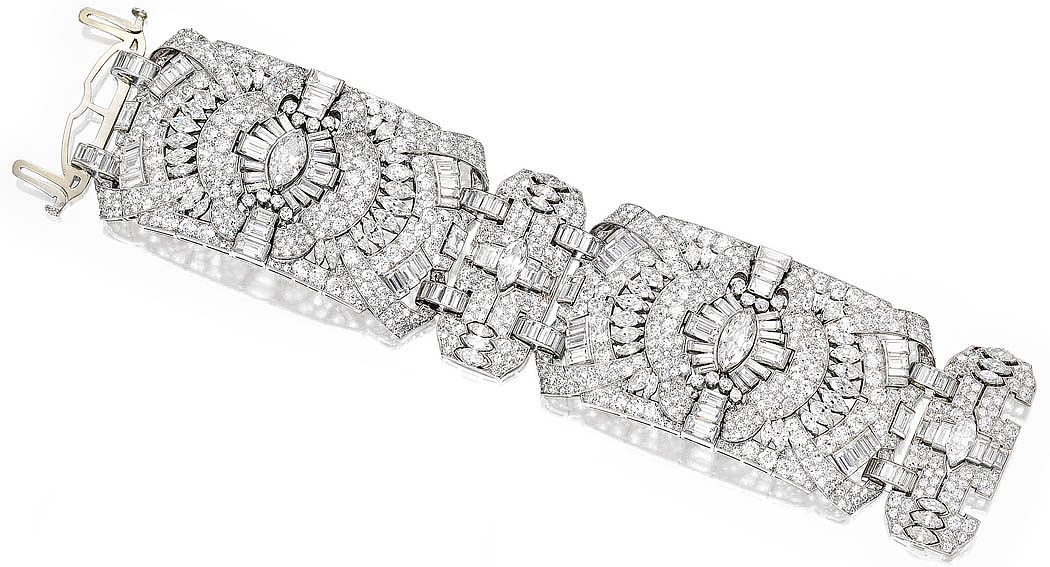 Along with the creation of new original jewelry, Raymond contributes a lot of time to redesigning of the “old” pieces in the style of new trends of fashion jewelry.

In 1937, Raymond Yard employed Robert Gibson, the 17-year old boy, as a doorman. Gradually, he began noticing that the young man’s career was similar to his own. He assumed to train Robert all knowledge of jewelry business. During the Second World War, Robert Gibson left the House and ran a service in the United States Army as an AIR FORCE fighter pilot. 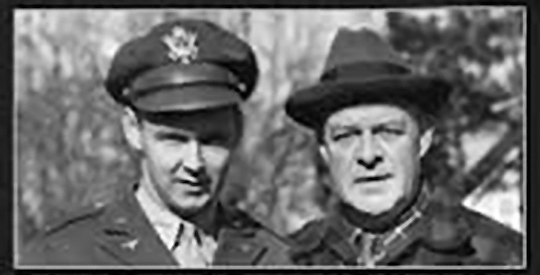 After the war, Raymond Yard kept training Robert Gibson and placed the Raymond Yard Jewelry House under his control, after having retired in 1958. The heart of the great jeweler Raymond Yard stopped beating in 1964.

Today the name of Raymond Yard is synonymous with the highest standards in jewelry. Diamonds in the jewelry masterpieces by Raymond Yard have always been the most pure and perfectly chosen ones and precious stones have always been the brightest. Even the smallest item in his gem was of the highest quality. He was the best of the best. On a ten scale, he deserves nine and, unfortunately, it is impossible to give a similar assessment to other jewelers of today. 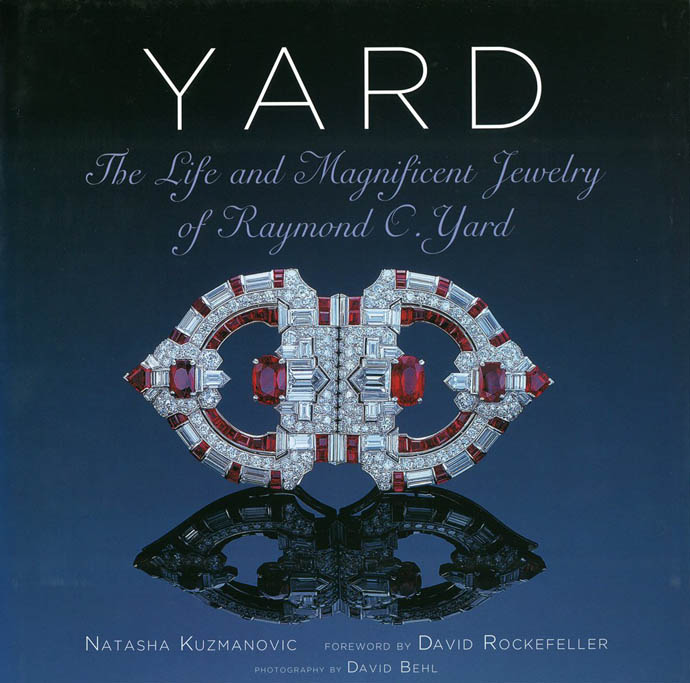 Robert Gibson resigned in 1989 after a successful career, having handed down the Raymond Yard Jewelry House to his son Bob Gibson. Having become the President of the company, Bob revived many of the most successful Raymond Yard’s and maintained the high quality of gems and mastership, which define the name of Raymond Yard. Bob Gibson never made false promises as the founder of the House did. In addition, thanks to this tradition the House of Raymond Yard remained being admired by generations of those families, with whom yet Raymond Yard worked. For the jewelry masterpieces, created under the direction of Raymond Yard, the collectors were hunting around the world. In this endeavor, Bob Gibson succeeded as well, trying to keep the heritage of the great jeweler. 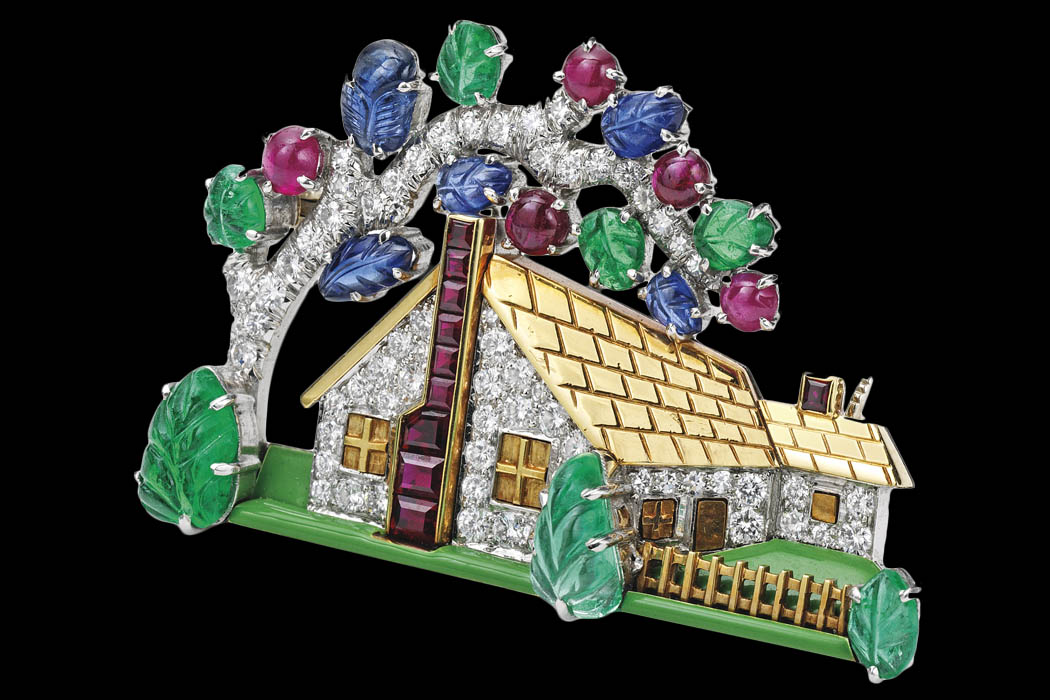 Bob Gibson thinks that there is a formula for creating jewelry masterpieces. Huge funds, virtuoso jewelers, flawless gems, and the heart of Raymond Yard is needed. Moreover, this is the only way to come up with something that is worth more than its weight in platinum.

Works by artisans of House “Lobortas” are distinguished with their whimsical interpretation of natural forms and are characterized by dynamism, asymmetry, fluidity and using of various jewelry techniques.

Jewelry made by artisans of the House “Lobortas”, can be considered as masterpieces of the jeweler’s art, which, thanks to a bold color play, perfection of lines and proportions have great artistic value and remain valid beyond time. 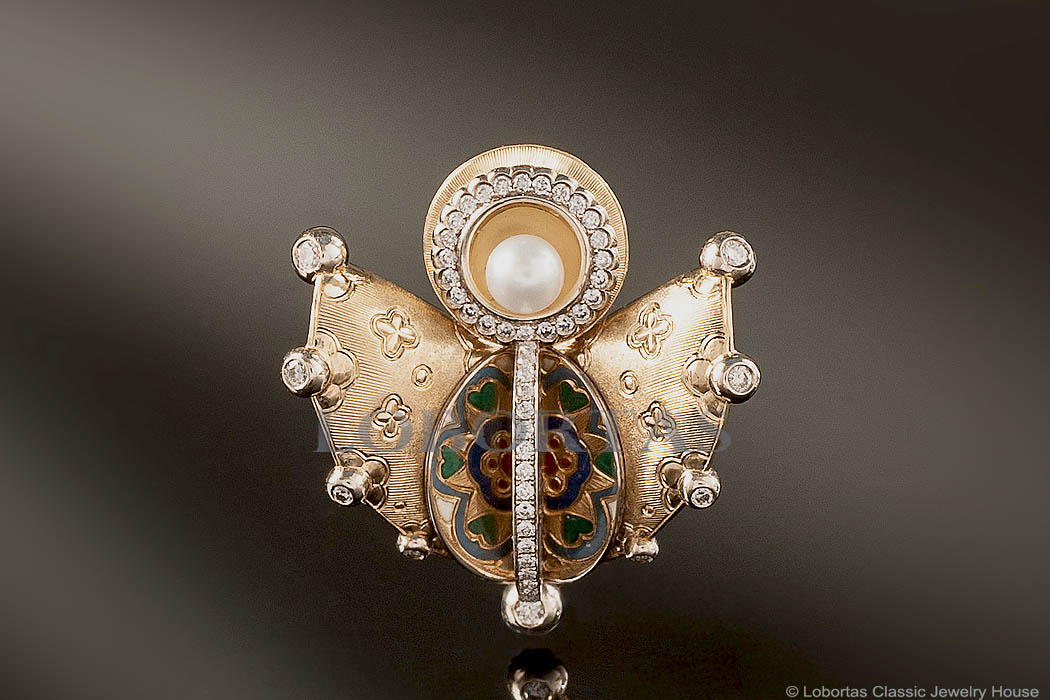