At the headquarters of the United Nations, where most meetings of the General Assembly and of the Security Council take place, an event entitled "Chess for Dialogue" – symbolic event for young chess players and chess sports as a whole, was held. 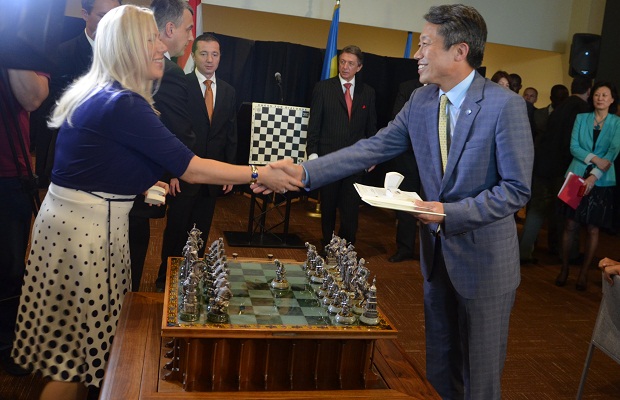 Opening of the Chess for Dialogue tournament – symbolic first move of Kim Won-soo and Susan Polgar.

"Chess for Dialogue" was organized by the Permanent Missions of Ukraine and Hungary to the United Nations with the support of the Secretary-General Ban Ki-moon, FIDE, Susan Polgar Foundation, Lobortas Classic Jewelry House. Twenty-talented children and chess players at the same time have the opportunity to see the diplomats, Permanent Representatives to UN, across the chess board, stressing the democracy of the game – chess is played on all continents and in all countries. Both adults and children, men and women, novices and masters, pupils and diplomats play chess. Today the game of chess has overcome all barriers – language, age, social status, and provides the opportunity for meaningful dialogue. Ban Ki-moon's welcoming remarks, as delivered by Hua Jiang, Officer-in-Charge of the Department of Public Information, stated: "With the help of partners such as the World and National Chess Federations, chess champions and leaders of community programs, we can harness the great potential of this universal sport in our efforts to build a better world. Please accept my best wishes for a memorable event."

Floyd Sarisohn, a well-known public and political figure, the vice president of the Chess Cоlleсtоrs International, an international organization for chess collectors, was present at the event as an honorable guest.

FIDE International chess federation focused a particular attention on the event as well. The President of FIDE Kirsan Ilyumzhinov sent a letter of gratitude for the holding of the Chess for Dialogue event within the walls of the United Nations headquarters and at the opening of the tournament in her welcoming speech FIDE vice president Beatriz Marinello addressed the participants, diplomats, children and guests of the tournament, stressing an unusual format of the tournament and its relevance and significance for our times.

The tournament, its democracy and deep meaning were noted by Dr. Zsolt Hetesy, Ambassador, Deputy Permanent Representative of Hungary to the United Nations, in his speech.

In the 21st century chess has acquired a new meaning. This is the maximum application of intelligence in the peaceful competition, and competition in the art of chess manufacture has become one of the manifestations of creative ingenuity of mankind.

The first symbolic move was made on Marches on Bosporan chess set, unique in its artistic and technical solution, made by the artisans of the Lobortas Classic Jewelry House. It is the first in the world chess set, combining as well as the game itself, an excellence and intelligence – jeweled mosaics of the chess field and a specially-designed electromechanical system. The pieces are made of silver and the composition is characteristic of the history itself.

Marches on Bosporan become a part of the history of humanity, not only by the creator's skill, unique materials and enormity of creative design, but also through its participation in the world's socio-humanitarian process.