Session of the Secretariat of the Leaders of the World Religions,
Dedicated to the 10th Anniversary of the Congress

As part of the meeting of the Secretariat of Leaders of World Religions, headed by Qairat Mami, Chairman of the Senate of the Parliament of the Republic of Kazakhstan, an International Scientific and Practical Conference dedicated to the 10th anniversary of the convening of the first Congress of Leaders of World and Traditional Religions, on "The Role of Astana Inter-religious Forum in the Dialogue of Civilizations." 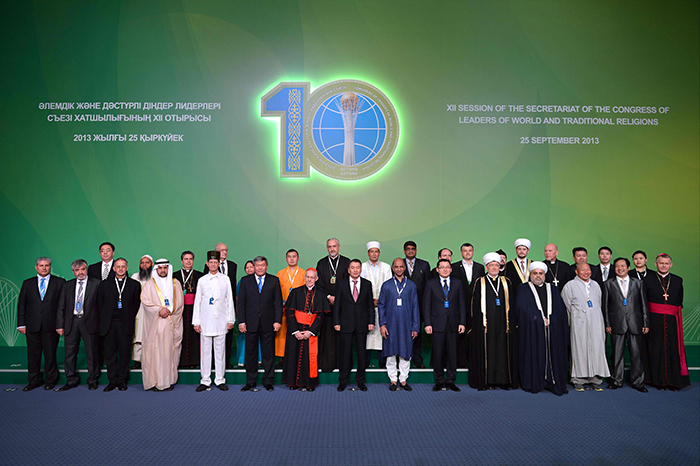 The conference was attended by leaders and representatives of world and traditional religions. At the opening of the meeting, the President of Kazakhstan Nursultan Nazarbayev addressed the participants of the conference. During the meeting, the prospects for the development of the Congress of Leaders of World and Traditional Religions, as well as topical issues of dialogue of civilizations were discussed.

The session of the Secretariat of the Leaders of the World Religions was attended by Dr. Homi Dhalla, the President of the Cultural Foundation of the Zarathustra World, Samir Somaiya, the Chairman of the Institute for the Research of Indology and Interreligious Dialogue, Sheikh ul-Islam Haji Allahshükür Hummat Pashazade, Head of the Caucasian Muslims Department, Homi Gandhi, the Head of the Federation of Zoroastrian Associations of North America, cardinal Jean Louis Tauran, the President of the Pontifical Council for Interreligious Dialogue, Yuri Novgorodov, the bishop of Evangelical Lutheran church in Kazakhstan, Emmanuel, Metropolitan of France, Sergey Matiushyn, clergyman of the Russian Orthodox Church, Rawil Gaynetdin, Chairman of the Spiritual Muslims Department of the European Part of Russia and the Council of Muftis of Russia, as well as Igor Lobortas, executive secretary of art history commission with Interreligious Council of Russia of the Russian Orthodox Church and Chief Executive of the Lobortas Classic Jewelry House.