The 42nd World Chess Olympiad has started in Baku.
Presentation of unique chess "Marches on Bosporan" to the President Ilham Aliyev.

September 1, impressive 42nd World Chess Olympiad started in Baku. The FIDE World Chess Federation and the Chess Federation of Azerbaijan have organized it. 324 male and female teams took part in it. It totals more than 1600 people taking part in the competition at once. This fact makes a record in the chess history. The official opening ceremony of the Olympiad was held with the participation of the President of Azerbaijan Ilham Aliyev. Owing to his contribution, this event was the most ambitious in the history of chess. Having made the first move of his team, the President walked round the game room, visited the press-center and the exhibition of the unique chess, specially prepared for this event. 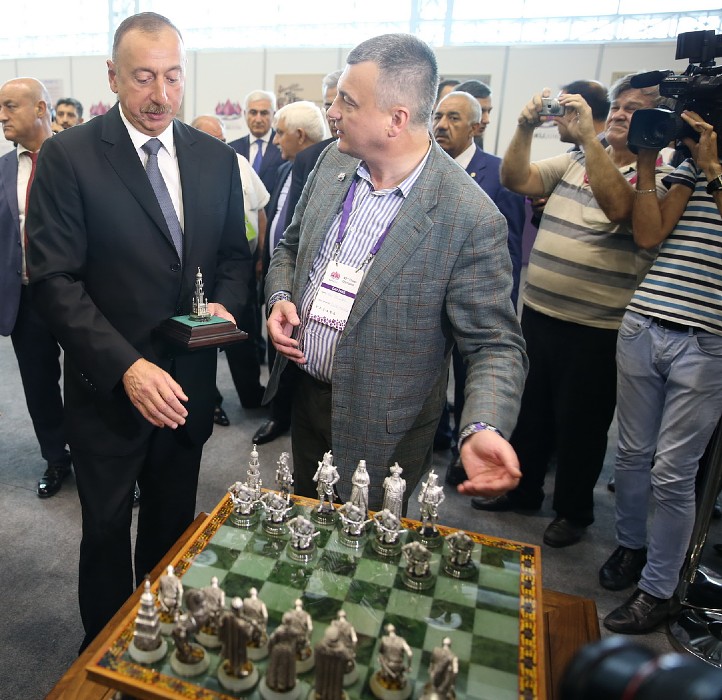 The main attraction of the exhibition, highly marked by the president, was the world's only electromechanical chess "Marches on Bosporan", designed by the artisans of the Classic Jewelry House "Lobortas". This chess set arrived in an excellent, modern Baku following the presentation in the UN and the commemorative meeting of the Congress of Chess Collectors International, the world association of chess collectors. The House "Lobortas" has designed the special presidential seal stamp in the shape of a chess piece "minaret castle", which was presented as a gift to the Azerbaijani President Ilham Aliyev by Kirsan Ilyumzhinov, the President of FIDE, and Igor Lobortas, the founder of the House.

September 8, Leyla Aliyeva, Vice-President of theHeydar Aliyev Foundation, was the special guest of the competitions. Makhir Mamedov, the director of the Operative Committee of the Olympiad, Vice-President of the Chess Federation of Azerbaijan, introduced the exhibition hall of the Olympiad to madame Aliyeva. Marches on Bosporan took the special place among the exhibits. The true works of jewelry art of the twenty-first century, created by artists of the Lobortas House – official cups of the International Chess Federation, the Grand Prix trophies and the Women's Chess Oscar "Caissa" (awarded at the Olympiad to Maria Muzychuk, the best female chess player of 2015) were presented to the Vice-President of the Heydar Aliyev Foundation in addition to the unique chess set.