August 11 His Holiness Dalai Lama arrived in Geneva to take part in the opening and the consecration ceremony of a new Tibetan Buddhist Center "Shedrub Choekhor Ling" on the Mont Salève mountain. 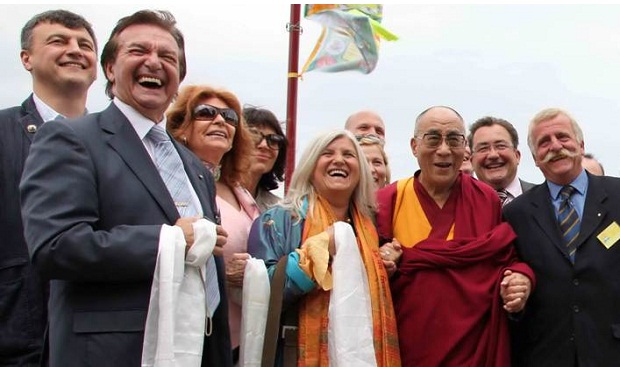 August 12 his Holiness Dalai Lama was welcomed in the new Buddhist center Shedrub Choekhor Ling on the Mont Salève mountain in France.

The monastery, built by the businessman Rafael Gimalov, deputy of Russia, was named by His Holiness Dalai Lama. Buddhist center is located in the close vicinity of Geneva, while in fact, this is already the French land.

Upon having read the Scroll the concert of "Ha Shir Vega Shevah" band took place.

At the invitation of the Geneva government and of the persons, who had ordered the special gift for the Dalai Lama, Kailas sculptural composition, Igor Lobortas, the Head of Lobortas Classic Jewelry House, by attending the temple opening met with the Tibetan spiritual leader.

His Holiness Dalai Lama's rated the skill of Ukrainian jewelers very high. The work "Svarga", the embodiment of the ancient Slavic symbol of gold and the precious imperial enamels, excited him and he wished Igor Lobortas and all Ukrainian artisans new successes in the field of art.

During the visit, Igor Lobortas also met with the leaders of Geneva and the famous grand granddaughter of the famous jeweler K. G. Faberge, Tatiana Faberge, living in Geneva.