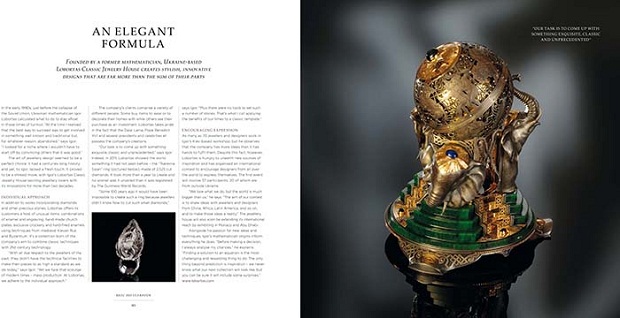 In one of the best hotels in the history of London, The Dorchester, located across from Hyde Park and famous for its renowned guests - Vivienne Lee, Brigitte Bardo, Elizabeth Taylor, Alfred Hitchcock, Woody Allen, as well as the fact that it is here the future British Queen, Princess Elizabeth, announced on the banns with Prince Albert, the commemorative meeting of Rolls-Royce Enthusiаsts Club took place on the 90th anniversary of the legendary Rolls-Royce Phantom Model, as well as on the publication of annual almanac Rolls-Royce Enthusiаsts' Club 2015 Yearbook.

Rolls-Royce Enthusiasts Club brings together about 10,000 owners of Rolls-Royce and Bentley from Britain, Europe, Canada, Japan and South Africa.

Those who were present personally at the commemorative event, the best of the best representatives of aristocratic Rolls-Royce Enthusiasts Club, estimated the works by the Classic Jewelry House "Lobortas" at their true worth. Those were the jeweled composition "Time of the World" and the record holder – the ring "Tsarevna Swan" with the highest number of 2525 diamonds, which is listed in the Guinness Book of Records.