Festival of the high art of metal

International Festival "Ybbsitzer Schmiedeweihnacht" is an annual cultural event, known not only in the Lower Austria, but also everywhere around Europe. Since its establishing the festival has been attended by 3 million tourists. As it is in Ybbsitz the blacksmiths' dynasties count 200 years old and more, and Ybbsitz is the place where Alfred Habermann, unique craftsman in the art of metal processing, the man who in the 1950-s was ahead of his time and created his own unique language in the blacksmith's work, reached the top of his mastery. His works are comparable with jazz music, the main thing of which is professionalism, love for the material and the improvisation. The most prestigious in the world and Europe blacksmith's award is named after Alfred Habermann, and the skill of the Austrian blacksmiths is recognized as the world intangible cultural heritage of UNESCO. 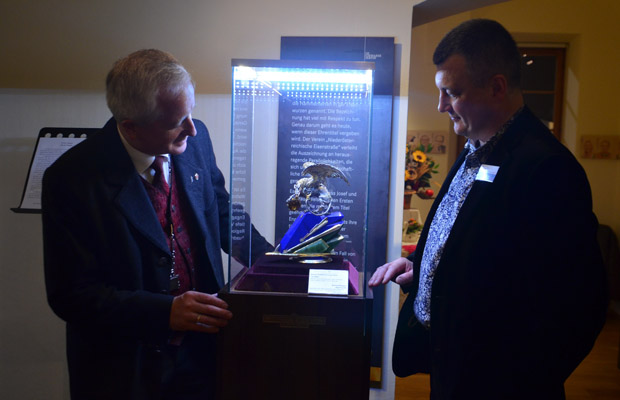 In the course of the Ybbsitzer Schmiedeweihnacht International Festival the Lobortas Classic Jewelry House presented the works, which the most fully and comprehensively showed the new approach of the Lobortas House to the creation of jewelry sculptures in a single space with the house-museum of Alfred Habermann. Time of the World, Griffin, Universe and other sculptures, in addition to the high artistic, philosophical and cultural values, are interesting in unification of technical methods of sculptural modelling and jewelry techniques – fastening of the precious stones, usage of the serious size (more than 1,000 carats) cut stones in the principally new compositional solutions, coin engraving, as well as unconventional solutions – creation of the rotary pedestals. Such an integrated approach was applied by the Lobortas House and is both the preservation of traditions, and their further development, an evolutionary step forward that allows us to discover the new horizons of the sculptural art.

Numerous visitors (more than 12,000 for two days), as well as burgomaster Josef Hoffmacher, who is the President of the Ring Of The European Cities Of Iron Work, expressed admiration for the works of the Lobortas House, having noted the force, confidence and freedom in the plastics, as well as jewelry thoroughness and the fineness of surface processing of the metal.

Josef Hoffmacher made the initiative of the permanent expositional space for works of the Lobortas House in Ybbsitz, the heart of the Lower Austria, the city of the blacksmiths of genius.

To commemorate the participation in the International Festival "Ybbsitzer Schmiedeweihnacht 2015" the Classic Jewelry House "Lobortas" created a memorable badge with the emblem of the city of Ybbsitz. The badge was solemnly presented to burgomaster of the city, Herr Josef Hoffmacher.