30th anniversary of Chess Collectors International (CCI).
"Marches on Bosporan" Chess Set is Presented
to the Leading Collectors of the World

May 25 at Hyatt Regency Jersey City the International Congress of CCI came to a close. In the exhibition of more than 40 rare collector's chess sets the central place was deservedly taken by unique chess "Marches on Bosporan", created by the craftsmen of the Lobortas Classic Jewelry House. 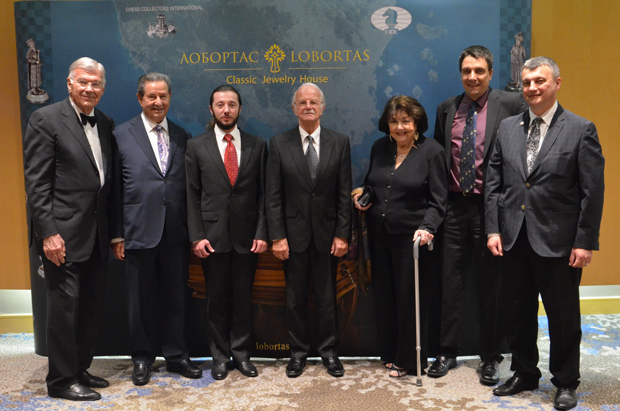 Floyd Sarisohn, the chairman of the convention, and CCI President Michael R. Wiltshire welcomed the participants of XVI Convention. Since its founding in 1984 Chess Cоlleсtоrs International for 30 years already has been making a great contribution into the exploration of chess history, disclosure of the connection between chess and universal history, culture, art, literature and various areas of science, has been publishing materials on the history of chessmen and chessboards, and has been bringing together representatives from more than 20 countries.

Under the program of the Convention, participants were kindly invited to see the renowned chessmen collection, chess fields and tables, owned by Jon Crumiller, CCI officer, the famous historian and analyst of chess and of everything with it connected. Not less interesting was the visit to another venerable collector Israel Rаphаelli.

During the Convention the successful auction was held, at which 36 lots were put up. Several antique and contemporary chess sets have found their new owners.

The world's only full jade field of unique chess "Marches on Bosporan" by craftsmen of the Lobortas Classic Jewelry House is made of rare light and more common dark green jade. In the 19th century Carl Faberge used jade in his exclusive handcrafted chess as well, although he made only half of the field out of jade. CCI President Dr. George Dean, the owner of Faberge chess, expressed his admiration for chess "Marches on Bosporan", by writing it in a special album. His admiration was shared by other authoritative and well-known around the world collectors, who made records in memorable album: Floyd Sarisohn, the chairman of the Congress and the CCI executive team member, CCI President Michael R. Wiltshire, Honorary CCI Presidents: Dr. Thomas Thomsen and Dr. George Dean.

Welcoming letter from Anatoly Karpov, the honorary member of CCI, triple world champion, the Russian Federation State Duma deputy, was read out. In the letter, he expressed gratitude to collectors for the invaluable contribution to the history of chess game, which they have made, keeping for future generations rarest, unique and most interesting chess artifacts.

In honor of the 30th anniversary of the Chess Cоlleсtоrs International the craftsmen of Lobortas Classic Jewelry House designed and manufactured gold badges. The Jewelry House founder Igor Lobortas handed the badges to Floyd Sarisohn, the chairman of the 16th Congress, CCI executive team member, and to Dr. George Dean, honorary CCI President.